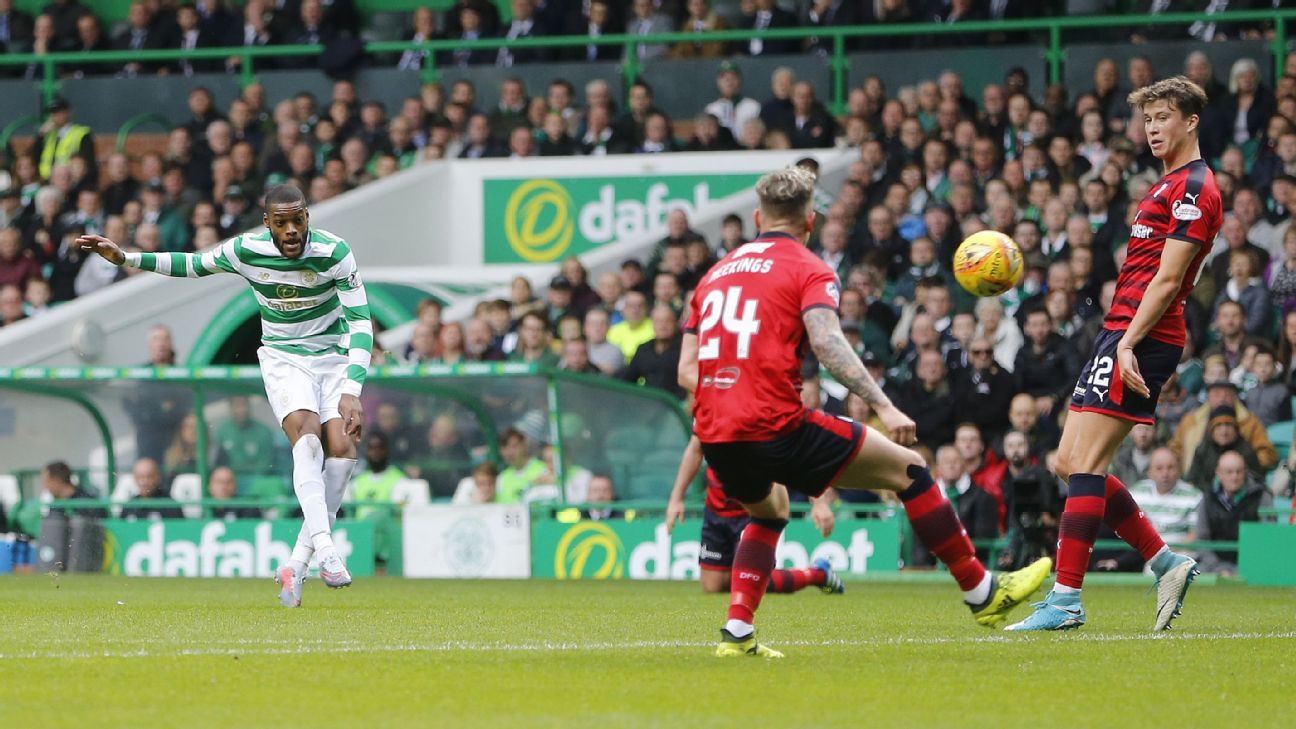 Olivier Ntcham’s second-half strike was enough to give an under-strength Celtic side a 1-0 Scottish Premiership win over Dundee at Parkhead.

With a view to the Champions League clash with Bayern Munich in midweek, boss Brendan Rodgers reshuffled his squad with goalkeeper Dorus De Vries and right-back Cristian Gamboa making their first appearances of the season.

The champions were held at bay in a goalless first 45 minutes but 21-year-old midfielder Ntcham’s long-range drive in the 61st minute extended Celtic’s unbeaten domestic run to 59 games and kept them top of the table over Aberdeen on goal difference.

Amid the seven changes from the side which drew 2-2 with Hibernian in their last outing, Eboue Kouassi returned from a knee injury sustained against Kilmarnock at the start of the season to partner Ntcham in midfield.

Former Inverness defender Josh Meekings made his Dundee debut after battling back from a knee injury with AJ Leitch-Smith back in the side as Sofien Moussa and Kerr Waddell dropped to the bench.

Despite the disruption to the line-up, Celtic had almost all the efforts on goal in the first half, starting in the fourth minute when Dundee keeper Scott Bain tipped a Scott Sinclair drive past the post.

Callum McGregor, Patrick Roberts, Leigh Griffiths, Ntcham and stand-in captain Kieran Tierney all had attempts on goal of various quality to no avail.

The well-organised visitors moved forward as often as they could and with a degree of threat but De Vries had little to do until the 33rd minute when he collected a weak shot from Leitch-Smith.

The home side looked like they would get the breakthrough when Roberts set up McGregor 12 yards out but Bain was equal to his side-footed drive.

Celtic upped the tempo as the second-half unfolded.

In the 58th minute Bain made a fine save from Roberts’ drive after the Manchester City loanee had slalomed through the Dundee defence, and he made an even better save a minute later when he denied Leigh Griffiths with his foot.

Bain was eventually beaten by Ntcham, who thundered in a shot from 25 yards which swerved and dipped before beating the keeper.

The Taysiders looked to get quickly back on level terms and finished the game strongly.

De Vries, who had last featured in September 2016 against Kilmarnock, made a fine save from Paul McGowan after he had been picked out by Kevin Holt and the Hoops No. 2 brilliantly parried a Roarie Deacon shot over the bar after the Dundee attacker had held off Dedryck Boyata.