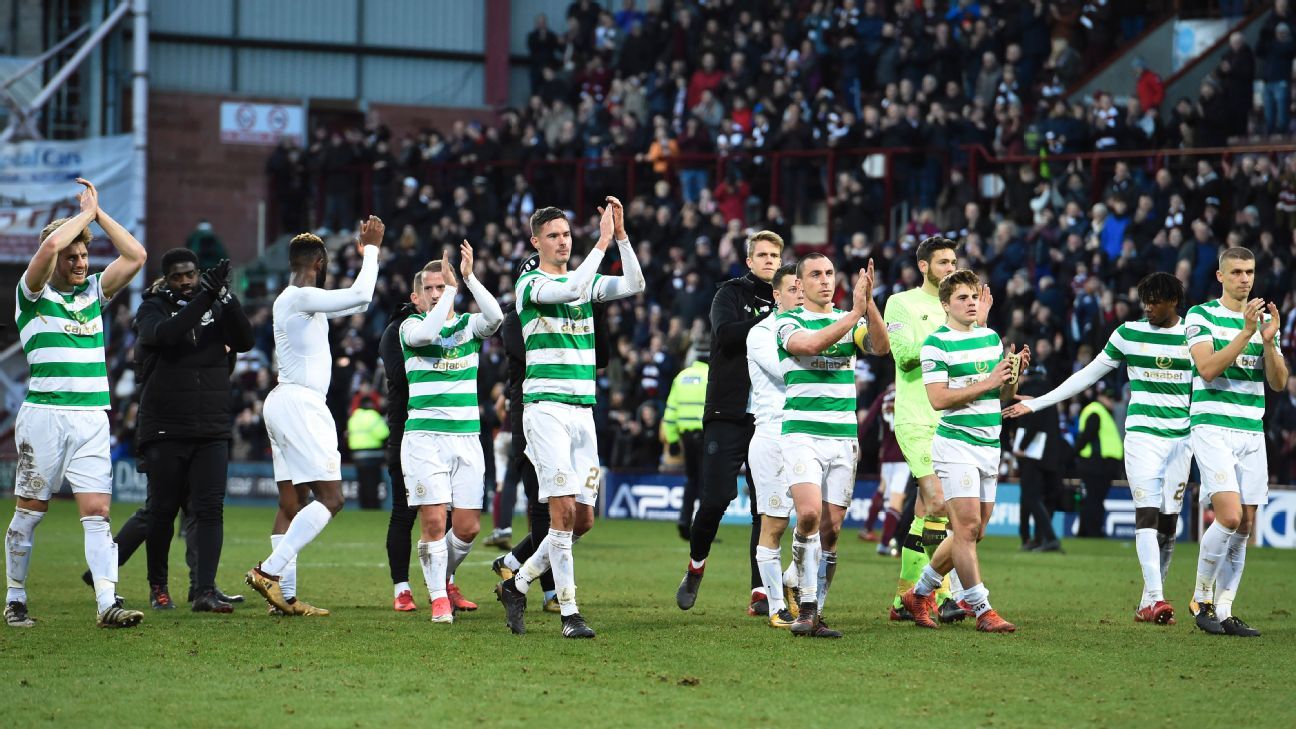 
Brendan Rodgers revealed he called an impromptu Celtic huddle on the Tynecastle pitch after their 69-game unbeaten domestic record ended in a 4-0 defeat by Hearts to remind them of their historic achievement.

Celtic, who broke their own 100-year-old British record when they made it 63 against St Johnstone in November, were stunned when Hearts raced into a deserved two-goal interval lead in the Scottish Premiership encounter through goals from 16-year-old midfielder Harry Cochrane and striker Kyle Lafferty.

A second-half double from attacker David Milinkovic, one from the penalty spot, put the finishing touches on a remarkable afternoon.

Rodgers was keen to put his first defeat by a Scottish club as Celtic boss since joining the Hoops in 2016 into context.

“Firstly, congratulations to Hearts,” the former Liverpool boss said. “They were the better team today and deserved to win the game.

“I have said over many months, if the players weren’t human I would say they would never lose. It was always going to happen. It is not nice when it does.

“I wanted to pull the players together and let them be aware that they were better than us today and we have to accept that.

“What they have done is absolutely amazing but to use this feeling that they haven’t felt for 18 months, use it as a lever moving forward, and let’s learn from it and be better for it.

“We are a bigger target because of what we have done, we accept that and now go and look to win our next game.

“My feeling is pride for the players. The run of 69 games comes to an end — a real historic achievement, remarkable.

“The players will go down in history because I am not sure it will be done again but certainly in our lifetimes it won’t be done and the players can take pride in that.

“I thanked them for that at the end. We made too many mistakes in the game to get anything out of it.

“Defensively we struggled. Hearts played a direct game which is fine and we failed to cope with Lafferty in the first period.

“He gave our two centre halves problems and you have to defend well to win a game. It is in the past now. We have to hit the reset button.”

Celtic right-back Mikael Lustig said the focus now is on the upcoming meeting with Partick Thistle — a game in hand that gives the Hoops the chance to go five points clear of second-placed Aberdeen.

He said: “The pride is not something we will look at over the next few days.

“My feeling is that I’m glad the game against Partick is coming on Wednesday and we can get back out at Celtic Park and start winning again.

“Now is not time to look back and see what we have achieved, we have to look forward.

“It’s a special feeling to go nearly two years without losing a domestic game. The things we have done haven’t been done before and probably won’t be done again, so it’s unbelievable.

“But of course it was a really sore one and all the credit to the Hearts team who really went for it.

“I don’t know what went wrong — everything. The pitch wasn’t the best, but Hearts were better.

“Early on we had a couple of chances from midfield and I felt we had some space to play football, but after the first goal we didn’t manage to create and we didn’t win the duels.”