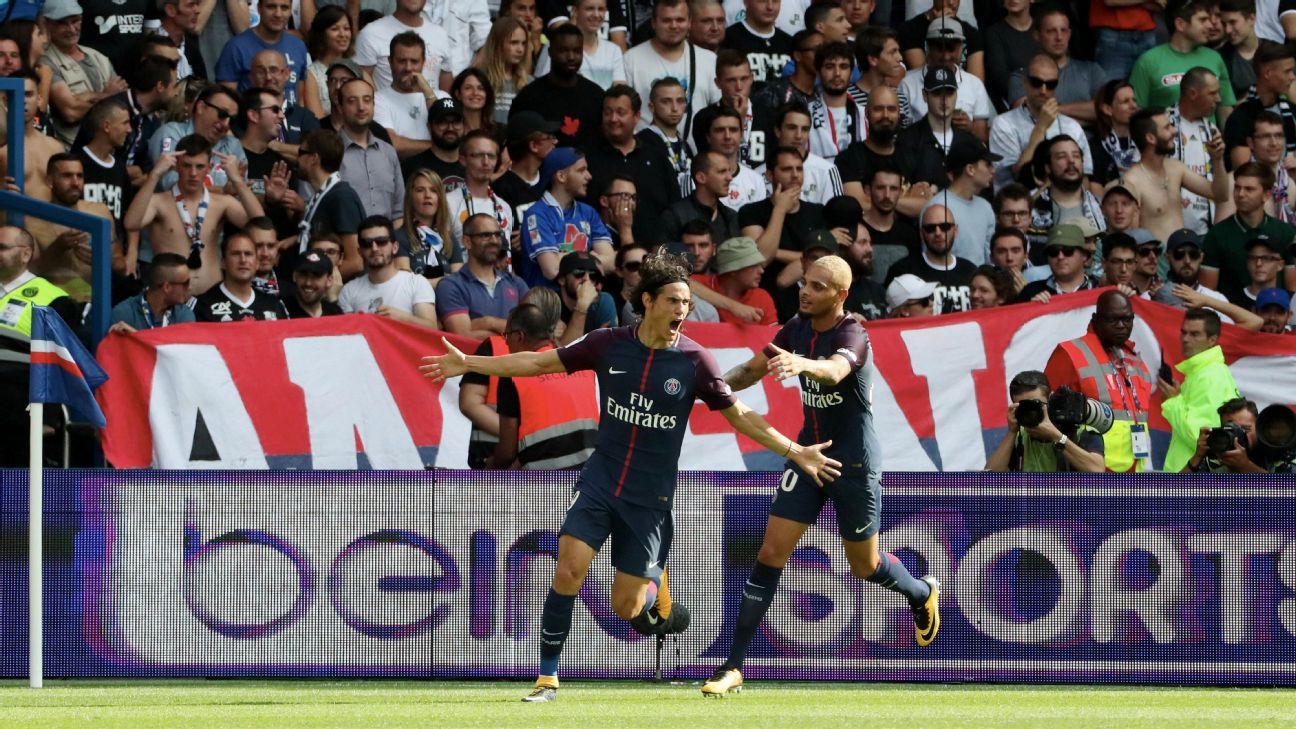 
PARIS — The Neymar era got underway with a win for Paris Saint-Germain, but the Brazilian superstar watched from the Parc des Princes stands as Edinson Cavani and Javier Pastore struck in either half to earn a 2-0 win over Amiens SC.

Cavani. The Uruguay international is off the mark for the new season and took his goal very well after being teed up by Dani Alves.

Alves. The Brazil international was outstanding in the Trophee des Champions win over AS Monaco in Morocco last week and although he was not at the same level against Amiens, the 34-year-old still assisted Cavani and was a regular threat going forward.

Straightforward. Although it was not the most impressive of performances, PSG still disposed of Amiens with minimal fuss and got their quest to recover the Ligue 1 title from Monaco underway with three points.

Thiago Silva’s injury. The captain only lasted the first half before having to come off with an adductor concern. The Brazil international is notoriously fragile and if it turns out to be anything other than precautionary, Unai Emery should be worried about the skipper after some preseason fitness issues.

Angel Di Maria. The Argentina international was poor and will need to do much better if he is to keep his place in the starting XI after Neymar’s arrival and with Julian Draxler to return as well.

6 — Emery’s starting XI was enough to get the job done but he could have been imaginative with his substitutions by bringing on Goncalo Guedes earlier and giving Christopher Nkunku a chance in central midfield instead of Blaise Matuidi when Thiago Motta came off.

GK Alphonse Areola, 6 — After the trauma that was last season, the Frenchman will have been grateful for a calm start to the campaign between the sticks, even if he knows that intense scrutiny lurks just around the corner.

DF Dani Alves, 7 — The summer arrival continues to add something to the team and kept up his prolific start to life with PSG by chipping in with an assist.

DF Marquinhos, 6 — It was solid but unspectacular stuff from the Brazil international, who looked equally calm alongside Silva in the first half as he did second-45 partner Presnel Kimpembe.

DF Thiago Silva, 6 — The 32-year-old was commanding enough until half-time, when the decision was taken to withdraw him because of a potential adductor problem.

DF Layvin Kurzawa, 6 — The France international continued his return to match fitness after surgery earlier this year with an encouraging display going forward on the left side.

MF Thiago Motta, 5 — The veteran Italy international added balance to the midfield but was far too slow at times, so it was no surprise that Emery decided to replace him after 66 minutes.

MF Marco Verratti, 6 — The Azzurri star grew into the match and was better in the second half than he was in the first but it was not his finest display as his unflattering start to the new season continues.

MF Adrien Rabiot, 7 — The France international stood out in the midfield but admittedly missed a very easy headed chance in the first half. The youth academy graduate could and should have done much better from such close range but it did not detract too much from an otherwise accomplished showing.

FW Angel Di Maria, 4 — Disappointing. Aside from a clever early pass to find Cavani, which went unrewarded, the Argentina international was not at his best and missed a number of descent chances and was less inspirational than usual. El Fideo will now face competition for a starting role from Neymar, Draxler and possibly even the increasingly peripheral figure of Lucas Moura.

FW Edinson Cavani, 7 — The Uruguayan took his goal well and continues to do what he does best: find space to put himself in the best positions to score. El Matador also laid on Pastore’s strike to make it 2-0.

FW Javier Pastore, 6 — Restored to his preferred No. 27 shirt after gifting the No. 10 to Neymar, the Argentina international’s promising start to the season continued with a vibrant performance that was capped by a simple goal from a Cavani pass at the end.

DF Presnel Kimpembe, 6 — The youth academy graduate stepped in for the injured Silva at half-time and adequately filled the void.

MF Blaise Matuidi, 5 — Sent on to replace Motta after 66 minutes, the France international was more mobile than his Italian teammate but did not add anything significant.

FW Goncalo Guedes, NR — The Portugal international could and perhaps should have been introduced earlier because the last five minutes was not enough for a player badly in need of game time and Di Maria did not deserve to see out the full 90 minutes in his form.