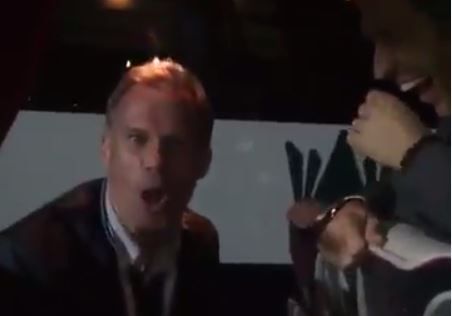 After all turning out in Michael Carrick’s testimonial over the weekend, Jamie Carragher, Luis Garcia and Eidur Gudjohnsen all took the team bus home together from Old Trafford.

As ever when a group of professional footballers gather in the same place, the postmatch banter was rife.

Gudjohnsen interrupted a conversation between Carragher and Garcia, joking that the ex-Liverpool pair had been discussing the latter’s “ghost goal” that knocked Chelsea out of the Champions League in 2005.

12 years on and they still can’t believe they got away with that “goal” ����⚽️ @Carra23 @LuchoGarcia14 #CFC #LFC #GhostGoal #Championsleague pic.twitter.com/tR5t1MXJLQ

Carragher and Garcia saw the funny side of Gudjohnsen’s interjection, both carrying on the witty repartee on Twitter.

This will never end!
Which makes it even better!! https://t.co/q8nmcraRwv

Carragher then upped the stakes by claiming that the Reds duo had actually been discussing the gilt-edged chance to equalise that Gudjohnsen missed at the very end of that same game.

No I’m talking about your chance in the last minute! https://t.co/71pz1EsRdR

The Icelandic forward then countered by sharing a photo of himself shaving using the rather elaborate mirror Chelsea went on to win that season.

I know I missed that chance. I think I missed a bit on my face here too? ���� pic.twitter.com/j5B6yvyxni

However, the quarrelling was soon resolved when Gudjohnsen offered an olive branch by posting photos of he and Carragher hoisting the Champions League trophy aloft.

But it always ended well for us my friend @Carra23 ������#champions #goodtimes pic.twitter.com/MGaFmizz9l

It’s nice to see that all’s well that end’s well. Everybody on the bus is still ‘fwiends’.

As for Gudjohnsen, and presumably the rest of the 2005 Chelsea squad, it would appear that the ‘ghost goal’ grudge is buried deep.