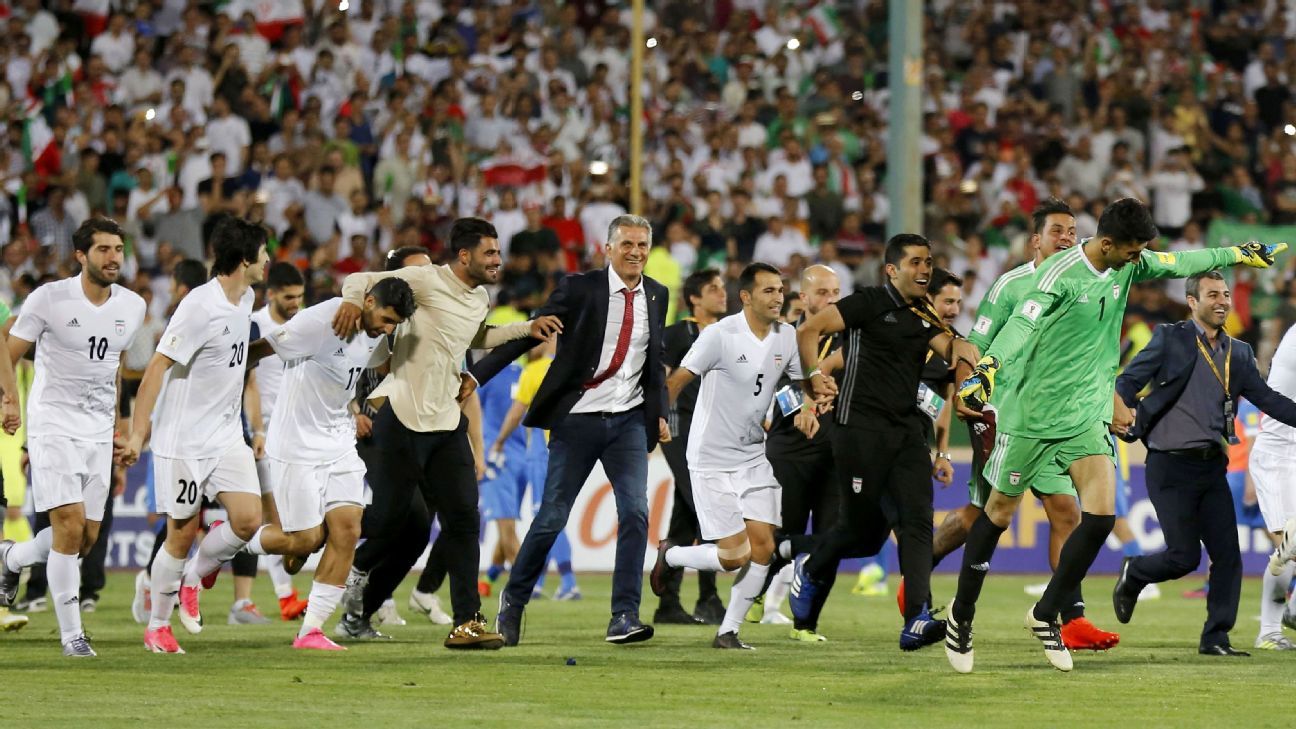 
Carlos Queiroz has been making history this week with Iran, and he wants to do so again next summer.

On June 12, Team Melli, as the national team is known, qualified for the World Cup — the first time they’ll be in back-to-back competitions — and now their sights are set on a debut appearance in the knockout stages.

Not long before midnight at the iconic Azadi Stadium in Tehran, the Mozambique-born manager was thrown into the air by his squad of Iranian players after they had defeated Uzbekistan 2-0. It was in recognition of a perfect World Cup qualification campaign and their being second only to Brazil in booking a berth in Russia.

“The atmosphere and excitement of the fans were great. They deserve this,” Queiroz told ESPN FC.

Iran deserve it too, and have been dominant in the third round of qualification, doing the job with two of the ten games still to play. Not only are Iran unbeaten, but not once has the defence been breached. Perhaps most impressive was that all knew a win at home to Uzbekistan would be enough for a ticket to Russia, and all expected exactly that would happen. This is a team that delivers.

“We tried not to think about the World Cup, not to play two games in the same game,” said Queiroz who was appointed in 2011. “We just wanted to focus on Uzbekistan, just win the game and collect the points. No doubt we were the best team on the pitch and fortunately we won. Someone needs to win in football, and it was us.”

After four years in which Iran was Asia’s highest-ranked team according to FIFA, few would argue that this team is the best on the pitch, the only one of any of the traditional continental powerhouses to shine consistently in qualification.

Despite that, Queiroz believes Iran still has work to do.

“I think that, honestly, there are two competitions in Asia,” said the former Real Madrid and Portugal boss. “The stats and the real competition. From a data point of view, the numbers show that we are the No. 1 and there is no doubt about that. We did not concede one goal, did not lose and qualified with two games left.

“But overall, we are far away from the international level. In that sense, I believe that South Korea and Japan are one step ahead of us. They have more experience and football closer to European standards. This is the gap we need to close during our preparation.”

Preparation is key. There is a year until it all starts. In the past, Iran have struggled to arrange training camps and friendlies, watching with envy as Asian rivals play all around the world.

“Not many [understand] as to the right amount of credit we deserve for this qualification,” he said. “It is hard to explain to the world our problems and that it is hard to find a place to train or teams to play.”

Queiroz has had numerous run-ins with bosses at the Iranian Football Federation and various clubs in his six years in the position. Now he wants total support in the 12 months leading to Russia.

“I will try to make a statement similar to a famous statement made by a famous old and great president: The question is not what Team Melli can do for Iran, but what Iran can do for Team Melli.

“In order to progress, we need better infrastructure and financial support for camps and friendly games.If we don’t do that, the result will be stagnation. This is not the expectation for Iran fans and not what they deserve.

“It is time to say that the national team has been doing everything for Iranian football, now it is time for the authorities to step up. The passion is there and we need to implement a different program in order for different players to progress. In Portugal we were producing good players 26 or 30 years ago, but in Portugal we did not sleep and kept producing players. This is what Iran misses — a master plan with an infrastructure and individual support.”

If all goes well, the next stage of the plan is within reach. Iran has appeared in four World Cups but has yet to survive the group stage.

Iran performed well in 2014, but this is a different team now — more cosmopolitan, confident and consistent. Young stars like striker Sardar Azmoun and midfielder Saeid Ezatolahi are already in Russia but ready to make the jump to the big leagues and expand further the country’s growing pool of players who are active and impressing in Europe.

“We have built a team and a squad of 26 and more players and I have more options,” he said. “I have three goalkeepers, three right-backs and so on. At the next World Cup, I can rest people and keep them fresh for the games while keeping the same standard.

“This is due to our players being brilliant. I have never saw in my life players who made such sacrifices.”

Now is not the time to stop.

“My goal and dream is to get to the knockout stage at the 2018 World Cup. I am fighting against this satisfaction disease. We should not be satisfied with the first round. We need to be ambitious. We need to think big. We will not go to Russia as tourists.”