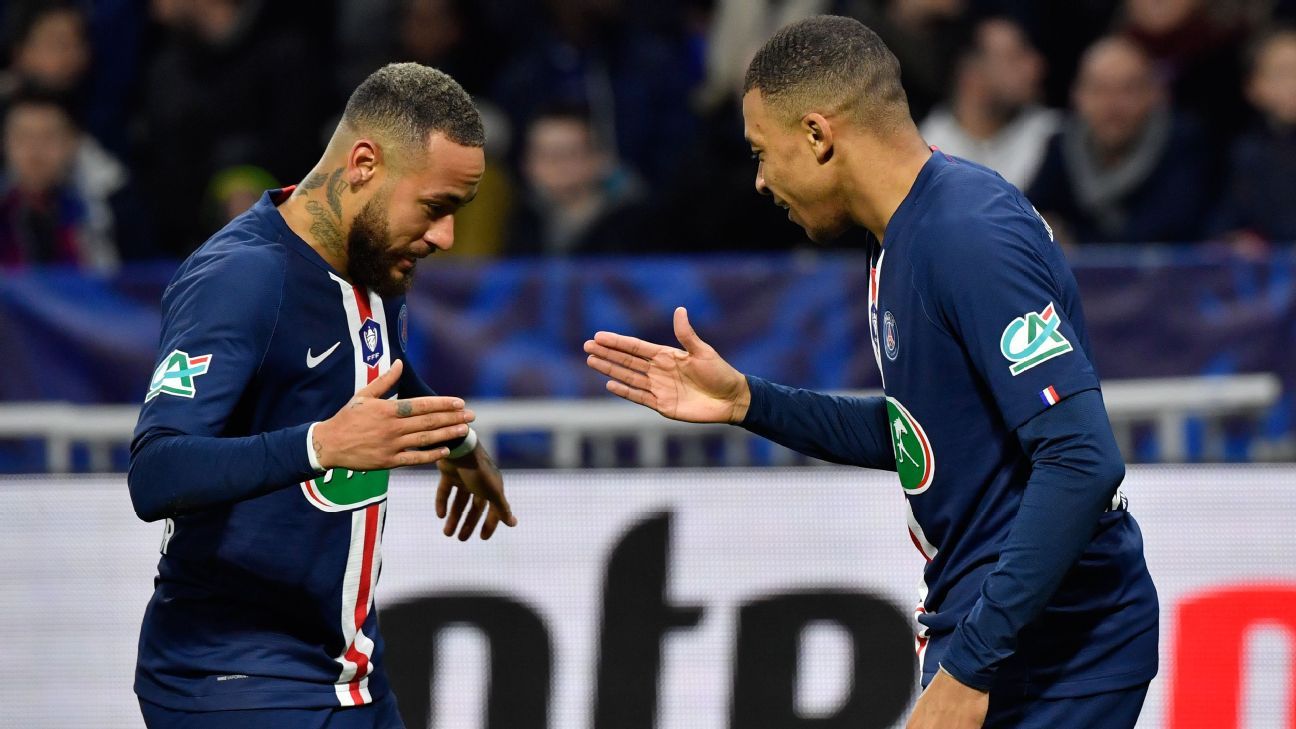 
French football doesn’t do things like everyone else. When the other big leagues restart their season, Ligue 1 doesn’t. When others don’t allow fans, Ligue 1 does. The French top flight started its 2020-21 season last weekend despite one of its teams (Lyon) reaching the semifinals of the Champions League and another (Paris Saint-Germain) falling to Bayern Munich in the final.

Despite another inevitable exodus of players — Houssem Aouar, Mbaye Niang, Memphis Depay, Mike Maignan, Gabriel, Moussa Dembele, Victor Osimhen to name only a few who could leave or have already left — Ligue 1 and its new fortune from TV rights money is gearing up for another exciting campaign.

Here’s what to look for as the new campaign kicks in.

Can Paris Saint-Germain avoid a Champions League hangover? Who can catch them? After seven titles in the past eight years, Paris are once more the massive favourites to be crowned champions. However, it also looks like this season could be far more dangerous than any before. PSG are still full of regrets after their Champions League final defeat against Bayern Munich last weekend. How will they get over it? Will they get over it?

In a campaign congested with fixtures, they will have to get straight into their rhythm while also dealing with the extra pressure now on them in Europe.

Do AS Monaco finally have the right formula? After years of shambles and disarray, along with many managers and sporting directors, Monaco have changed everything again this summer. Out went Robert Moreno, in came Niko Kovac. Paul Mitchell has also arrived to run the recruitment, and hopes are high.

The 2017 champions drew their first game of the campaign against Reims 2-2, but they showed some promise. They have great young players like Youssouf Fofana and Aurelien Tchouameni, as well as experience with the likes of Wissam Ben Yedder, Stevan Jovetic and even Aleksandr Golovin. They should certainly do better than the ninth-place finish they achieved last season.

Same story, new hope in Lyon? This summer should be like the last one, when Nabil Fekir, Tanguy Ndombele and Ferland Mendy all left the club. This time, it should be Aouar, Depay and Dembele’s turn. Lyon sell and rebuild; it’s what they do, and already there is another wunderkind in the pipeline in 20-year-old midfielder Maxence Caqueret. They have fresh hope and belief born from their run to the Champions League semifinals.

Rudi Garcia is more popular among fans than ever, and the club will invest in his squad so they can erase from their memory the disappointing seventh-place finish of last season, which means there will be no European competition for Les Gones this season for the first time since 1996.

Do Lille have another good cycle in them? For the second summer in a row, Lille have lost their best player. Nicolas Pepe went to Arsenal in August 2019 for €72 million and Victor Osimhen joined Napoli in August 2020 for €81m. Year after year, Lille produce good teams and good results. They finished fourth last year while navigating a Champions League campaign as well.

Sporting director Luis Campos has worked his magic again this summer, with the arrival of Jonathan David, Isaac Lihadji, Eugenio Pizzuto and Sven Botman all so promising.

Will the fourth time be the charm for Neymar? His numbers in Ligue 1 since he arrived three years ago are incredible, really. At 28, he is the best player French football has ever seen, and it’s a privilege to have him in the league for a fourth year. His objective, like PSG’s, will be the Champions League, but let’s hope that he lights up Ligue 1 with his talent, too.

Is this Mbappe’s final season in Paris? Like Neymar, his contract with Paris expires in June 2022 and until he extends it (which the club is hoping for), there will be a question of whether this could be his last season in Ligue 1. The 21-year-old could win a fifth title in a row and will try to improve on his ratio of a goal every 87 minutes in the league last season.

Will Ben Yedder carry Monaco? He did everything he could last season, finishing as top scorer with 18 goals and seven assists, but the team’s ninth-place finish was disappointing. Ben Yedder, 30, will have to carry them again this year. He is their primary finisher and with the Euros rescheduled for next summer, this is a big season for him if he hopes to get a France call-up.

Thauvin, Marseille’s old-new signing: Before the really bad ankle injury that kept him out all of last season, Florian Thauvin had been Marseille’s best player. Now the 27-year-old is back and will feel like a new signing for l’OM. Without him, they had a great season last year and if he can get back to his best, the 2018 World Cup winner will make them so much stronger.

Eduardo Camavinga, MF, Rennes: At 18, he is arguably the best in the world in his age group and position. His vision, technique, skills, maturity, pace and strength make him a phenomenon in central midfield. Rarely will you see a talent like him, and he will take Ligue 1 by storm again this year.

Adil Aouchiche, MF, Saint-Etienne: He left PSG on a free to join Saint-Etienne, where he was promised far more game time. Already the star of France’s youth teams, the 18-year-old playmaker showed great things in preseason and his wonderful technical ability should shine through this season.

Amine Gouiri, FW, OGC Nice: Lyon let him go to Nice for only €8m this summer, which raised eyebrows, and then he scored twice on his debut against Lens last weekend. The 20-year-old striker has incredible potential and Lyon might regret selling him so early.

Axel Disasi, DF, AS Monaco: The 22-year-old centre-back had a great season with Reims last year and was highly coveted this summer. He chose Monaco and scored on his club debut… against Reims. He is impressive defensively and has amazing determination.

Seko Fofana, MF, Lens: He was one of the revelations in Serie A last season with Udinese, scoring in their win against Juventus for example. The 25-year-old will be the boss of this newly promoted Lens team with his power in midfield.

Morgan Schneiderlin, MF, OGC Nice: After 12 years in England with Southampton, Manchester United and Everton, the France international, 30, is back home. He was seduced by the Nice project and brings his experience, intensity and physicality to an upwardly mobile team.

Jonathan David, FW, LOSC Lille: He and Alphonso Davies make up the crown jewels of Canadian football. After a great season with Gent, many clubs were after him but Lille beat them to the punch. His pace, skills and finishing make the 20-year-old a superb prospect.

Pape Gueye, MF, Marseille: He was one of the best midfielders in Ligue 2 last season with Le Havre, who made him captain despite only being 20 at the time. He really impressed with his left foot and his workrate on the pitch. Marseille pulled off a great coup in convincing him to make the step up.

Patrick Vieira, Nice: Last season’s sixth-place finish didn’t tell the whole story about the job Vieira did on the French Riviera. He struggled at times and it was hard to make out his philosophy, but he kept going and the season was ultimately a positive one in the end. He has to do better in terms of performances and quality of football this year.

Andre Villas-Boas, Marseille: In his first season at the club, he overachieved and brought Marseille back into the Champions League after a six-year absence. He almost left in the summer because of many disagreements with ownership, but the players convinced him to stay.

Julien Stephan, Rennes: The youngest manager in Ligue 1 at 39, he just completed two almost-perfect seasons with Rennes: the team qualified for the Champions League last season and won the French Cup the previous year. He has the talent to do it again, and maybe go one better this time around.

Claude Puel, Saint-Etienne: The former Leicester City manager has changed everything at Saint-Etienne. He got rid of most of the older, more experienced players to start a new cycle with young and exciting talents like Fofana, Aouchiche and Yvan Neyou. His gamble has to pay off, though.

The race for the title

It will be very hard to compete with PSG and their superior squad throughout a long and congested campaign. Marseille will want to confirm their excellent 2019-20 season was no fluke, Lyon and Monaco want their revenge while Lille, Nice and Rennes will want to keep being the troublemakers. Saint-Etienne under Puel and Bordeaux under Jean-Louis Gasset will hope they can do better than last year

The fight against relegation

It will be another fascinating battle at the bottom of the Ligue 1 table this season. The two promoted teams, Lens and Lorient, have strengthened their squad really well and look promising. Metz managed to stay up last year, but they could struggle more this time like Brest and Dijon.