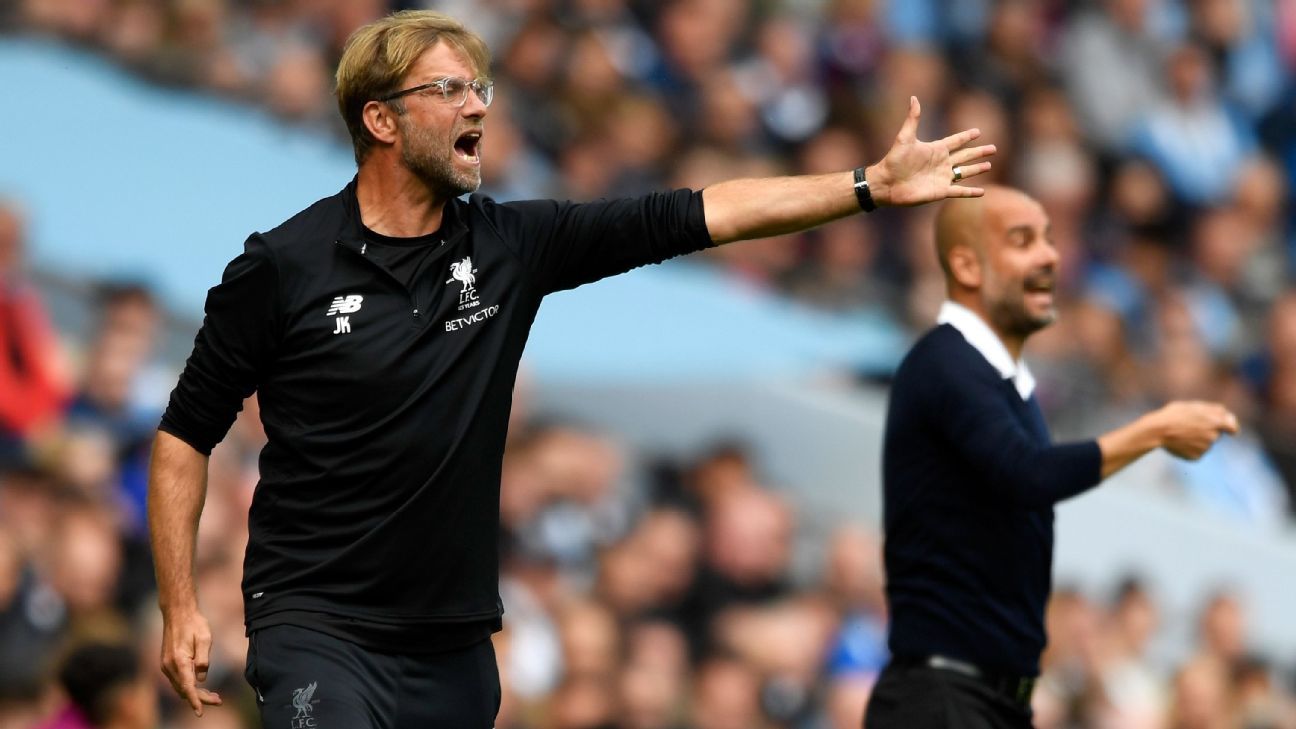 
MANCHESTER, England — It is in adversity that we see the true strengths and weaknesses of the teams lining up to challenge for the Premier League title, and it is fair to say that while Manchester City have passed their tests so far this season, Liverpool have stumbled at the first hurdle.

Arsenal highlighted their propensity to implode when losing 4-0 at Liverpool two weeks ago, but Chelsea showed their mental toughness and all-round quality by overcoming an opening-day defeat at home to Burnley by defeating Tottenham at Wembley a week later.

Spurs have yet to show they can cope with the pressure of ending a dismal run of form at their temporary home, despite maintaining their impressive away form with a 3-0 win at Everton.

And as for Manchester United, they responded well to going behind for the first time this season at Stoke City, but failed to see out the game and win, conceding an equaliser in the 2-2 draw at the Bet365 Stadium that ended their flawless start to the season.

City had their own testing moment when, trailing at home to Everton last month, they went down to 10 men just before half-time following Kyle Walker’s sending off. Ultimately, though, they were able to salvage a point from the game thanks to Raheem Sterling’s 82nd-minute equaliser and underlined their status as the team most likely to beat United to the title.

In losing 5-0 at the Etihad, however, Liverpool failed to display their credentials when it comes to showing grit, tenacity and stubbornness. Sadio Mane’s first-half sending off was unquestionably the decisive moment, but it should not have been the catalyst for a Liverpool collapse.

Trailing 1-0, Liverpool were still in contention and causing City problems when Mane was dismissed by referee Jon Moss for a dangerous head-high challenge on goalkeeper Ederson.

But while some teams, some coaches, smell the danger and put up the barricades when down to 10 men, Jurgen Klopp failed to act quickly or decisive enough to prevent his team from sliding to their heaviest defeat in Manchester in 70 years.

By substituting Mohamed Salah with Alex Oxlade-Chamberlain at half-time, the Liverpool manager attempted to make his team more solid and difficult to break down but, in doing so, he simply took away the pace that would have enabled his side to defend in number and hit City on the counterattack.

Under Klopp, Liverpool can be sensational when going forward, as they proved against Arsenal. But their defensive frailties have not been remedied and, when faced with the challenge of repelling City a man down, Liverpool had neither the tactics nor personnel.

A Jose Mourinho team in a similar situation would kill the game as a spectacle, flood the defensive areas and attempt to score on the breakaway. Similarly, Roberto Di Matteo’s Chelsea emerged from Barcelona with a 2-2 draw in the 2012 Champions League semifinal after losing John Terry to a red card while a goal down against the then-European champions.

Being down to 10 men does not always lead to a team being torn apart, but it did for Liverpool at the Etihad. They could not defend in numbers, but they also failed to give City any concerns in an attacking sense when chasing the game, so they capitulated in the worst possible way.

In contrast, City held firm and attacked with pace and movement when losing 1-0 to Everton last month in the wake of Walker’s dismissal. Their ability to get something from that game was down to a combination of pragmatism and adventure, whereas Liverpool showed neither.

“1-0 down with 10 men against City is really not the best place to be,” Klopp said. “It was a hard lesson today, but we have to learn how to influence the game in another direction. We have to score. We were not compact enough, we didn’t jump in midfield enough.

Klopp described Mane’s challenge on Ederson as “an accident” but played down the prospect of an appeal against the red card, suggesting it “would be another waste of time, like the whole game today.” But there are certainly lessons to be learned by Liverpool after this defeat and its manner. Can they respond against Burnley next week?

City, meanwhile, have now shown on more than one occasion their ability to overcome adversity to win points. The Everton draw was one example, as was the late, late win at Bournemouth, when City fought until the dying seconds to win through Sterling’s goal.

Guardiola’s team have shown they can win in style and also dig out a result, and that is why they will push all the way to be champions. By contrast, Liverpool have still to show that they can win or even draw “ugly.” Until they do, they cannot be considered genuine title challengers.