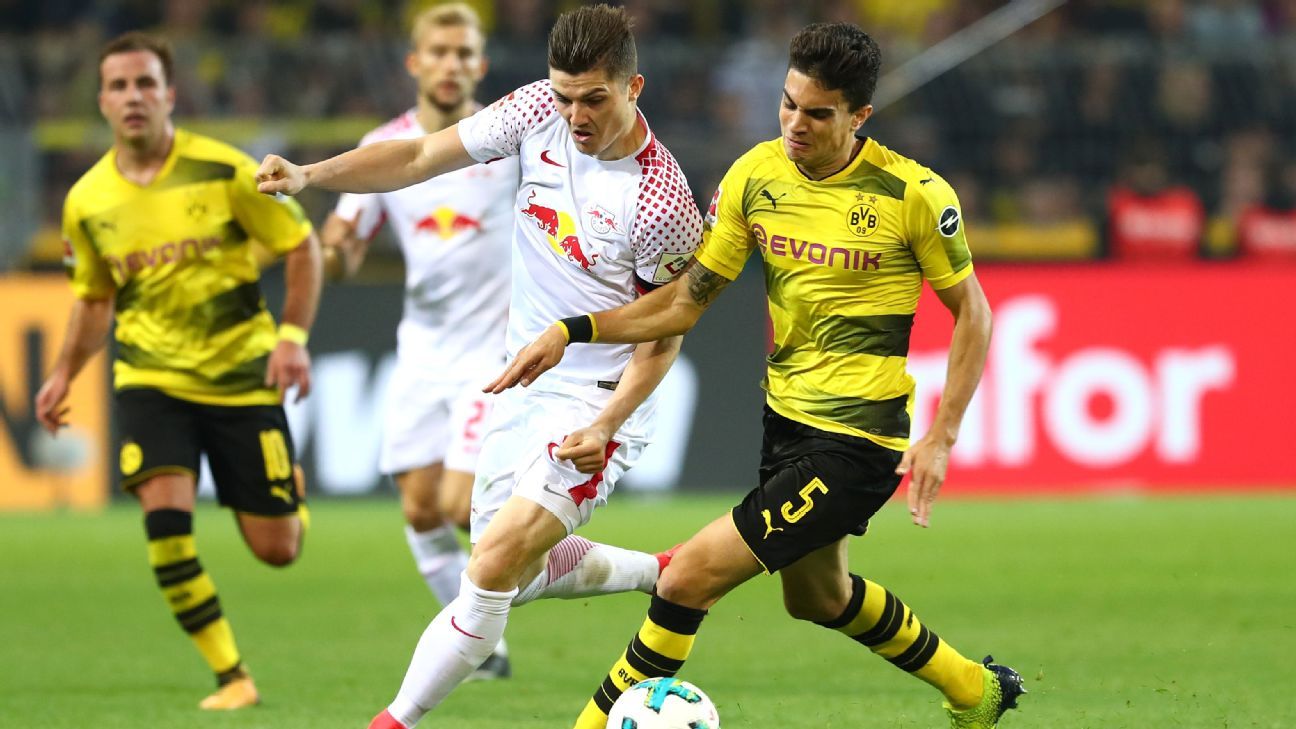 
It’s official: the top teams in the Bundesliga have never had it so good. Granted, there’s the slight indignation of being only cast as extras in the 28th instalment of the “Bayern: Champions of Germany… Again” franchise. But below the Bavarian behemoths, there is more space than ever to carve out a charmed life in the sunshine, too. Three guaranteed starting berths in next season’s Champions League offer a consolation prize on an unprecedented scale for the Bundesliga’ second, third and and fourth-finest sides.

The additional space at Europe’s top table should have galvanised competition in the peloton and produced the most exciting race for the top four (minus one) ever. Only three points separate current runners-up Borussia Dortmund from sixth-place RB Leipzig ahead of their class war-infused showdown on Saturday night.

Even Borussia Monchengladbach, in seventh, still have an outside chance of squeezing in. Dieter Hecking’s stylish but inconsistent side are five points adrift of fourth spot going into their home game against Bremen on Friday. But somehow, the excitement is not shared uniformly. As ever, it’s a matter of perspective. Some are much happier to be involved in this six-way tussle than others.

Easily the most pleased team in the mix for UEFA’s millions are Eintracht Frankfurt. The Eagles had scaled similar heights by the halfway stage in 2016-17 before falling away dramatically after the winter break. This year, Niko Kovac’s collection of journey man and underrated youngsters are threatening to last the course.

Bearing in mind the relatively modest individual quality at the former Bayern player’s disposal, fourth-place Frankfurt have done incredibly well so far. Their unlikely success has come on the back of having the second-best defence in the league (27 goals conceded) but only the eighth-best attack (32 goals scored), which tells the story of this team. They’re tough to beat, don’t need many chances to score and not many goals to win points. Their game is founded on balance, a simple yet rather elusive premise in a league that is enthralled with the high-octane pressing game.

Schalke 04 (third) and Bayer 04 Leverkusen (fifth) are also pleased that their position in the table might be in line with their club names. The Royal Blues, with their expensive squad, giant stadium and huge fan base, have punched significantly below their weight since their last appearance in the Champions League (2014-15), mainly as a consequence of poor managerial appointments. Under Domenico Tedesco, Schalke are at last getting back to where they belong. Without their return to the league’s upper echelons, the Bundesliga can’t begin to make up ground internationally.

Leverkusen don’t quite have the history and status of the Gelsenkirchen-based “Knappen (“miners”) but manager Heiko Herrlich has done incredibly well to turn a squad of gifted players into a functioning unit willing to supplant their technical skills with some old-fashioned grafting. In Jamaican winger Leon Bailey, Bayer have unearthed a budding superstar who might well be crowned the Bundesliga’s player of the season. The campaign could not have gone much better considering that Herrlich, the former Germany U-19 coach was quite far down the potential list of successors to Roger Schmidt after Thomas Tuchel had turned down the club’s advances.

For Dortmund and Leipzig, opponents in a contest that promises to be fiercely contested this weekend, the situation is more complicated.

Last November, Dortmund’s 3-2 home defeat by the Saxons spelled the beginning of the end for manager Peter Bosz. Peter Stoger’s position is not as precarious: the Austrian has won five and drawn five of his 12 games in charge to steer the club into the last 16 of the Champions League and into second spot. But Dortmund’s rather uninspired and error-prone performances have left many wondering whether he’s the right man for the job beyond the season. After all, good relations with the board are not a substitute for a coherent playing strategy that can get the best out of Borussia’s multi-talented squad and re-institute the belief that this a side that can go places.

In-demand pros like Christian Pulisic or Marco Reus will take the level of the team’s performance into account when it comes to weighing up their options. For that reason and many offers, BVB can’t afford to miss out on the Champions League next season. As much as they are a more settled club after the departure of Tuchel and the horrific bomb attack they suffered 11 months ago, they have gone backwards in a footballing sense. A third-place finish in their Champions League group was a chastening experience. Dortmund expected to be comfortably ensconced in second and challenging for major trophies, not second by the skin of their teeth and hanging on for dear life both domestically and in the Europa League, where their elimination of Atalanta verged on flattery.

Leipzig have similar issues ahead of Saturday’s crunch game. The bond between sporting director Ralf Rangnick and manager Ralph Hasenhuttl perhaps is not quite as solid as it was in light of their Champions League elimination and failure to get anywhere closer to FC Bayern this season. A deep run in the Europa League could yet salvage the season but right now, they are heading for an underwhelming sophomore year in Germany’s top flight.

Their momentum has been halted and it might even get worse. There is a sense that quite a few players, including striker Timo Werner and pivotal attacking midfielder Emil Forsberg, are quite to join a Naby Keita-led exodus at the end of the season. If Hasenhuttl were to leave as well, RB would have re-invent itself, and at a time when some of the traditional blue-chip teams are coming back (see above) and when every player doing well becomes an automatic target for half a dozen wealthier clubs abroad.

The only chance RB have of keeping the band together is to improve by at least a couple places to get into Europe’s premier club competition once more. By beating an unconvincing Dortmund, they have a big chance to get ahead momentarily but we can expect many more twists and turns in this tale. The runners and riders might all feel very differently about being in the race but they’re really quite similar: none are good enough to pull away from the crowd.