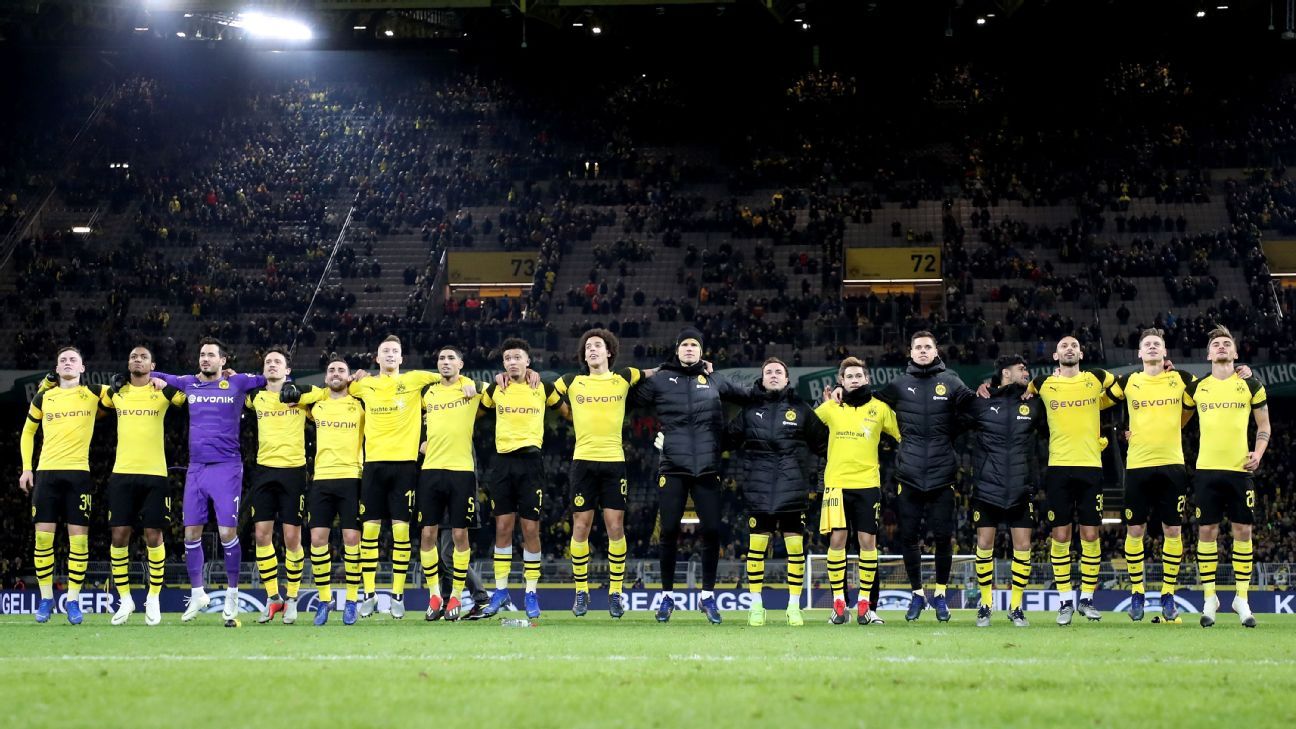 
DORTMUND, Germany — Borussia Dortmund coach Lucien Favre has revealed United States winger Christian Pulisic has picked up a calf injury, and said that he completely understands a nationwide fan protest to abolish the Monday games after a 2-0 win over SC Freiburg on Saturday.

Injury worries are starting to pile up for Dortmund, with Pulisic and centre-back Manuel Akanji (knee injury) absent from the squad on Saturday, and defender Dan-Axel Zagadou had to come off with a foot injury after 37 minutes.

“So far I can’t say anything [on Zagadou’s injury],” Favre said after the match. “I hope it’s nothing bad because that would be a massive problem for us. Akanji and Pulisic are also injured and right now I don’t know if they will be fit next week. It’ll be close.”

Dortmund will have a full week to recover ahead of a crucial derby against struggling rivals Schalke on Saturday.

Meanwhile, the Westfalenstadion stayed silent for the first half in solidarity with fan protests a that took place on the weekend in most football grounds across all leagues to demonstrate for the abolishment of Monday fixtures and commercialisation in football.

“I completely understand the people that protest,” Favre said of the display. “It’s a shame for us because the fans give us a lot when they are loud. We need that.

“But I understand it because I would completely abolish Monday fixtures. That’s my opinion for many years — not just now. It’s ridiculous.”

Dortmund kept their unbeaten run alive with the 10th win of the season, which sees them move seven points clear of second-placed Borussia Monchengladbach, who will play against RB Leipzig on Sunday.

Macro Reus opened the scoring in the 40th minute, converting from the spot after Freiburg defender Dominique Heintz illegally stepped on Jadon Sancho’s foot in the box. The Black and Yellows put a lid on their win with substitute Paco Alcacer finishing off a counter-attack in stoppage time.

The Spain international has scored nine of his 10 goals coming off the bench, setting a record for substitute goals scored in a complete season after 13 rounds. For BVB it was the 20th goal coming from a player off the bench in their 20th competitive fixture.