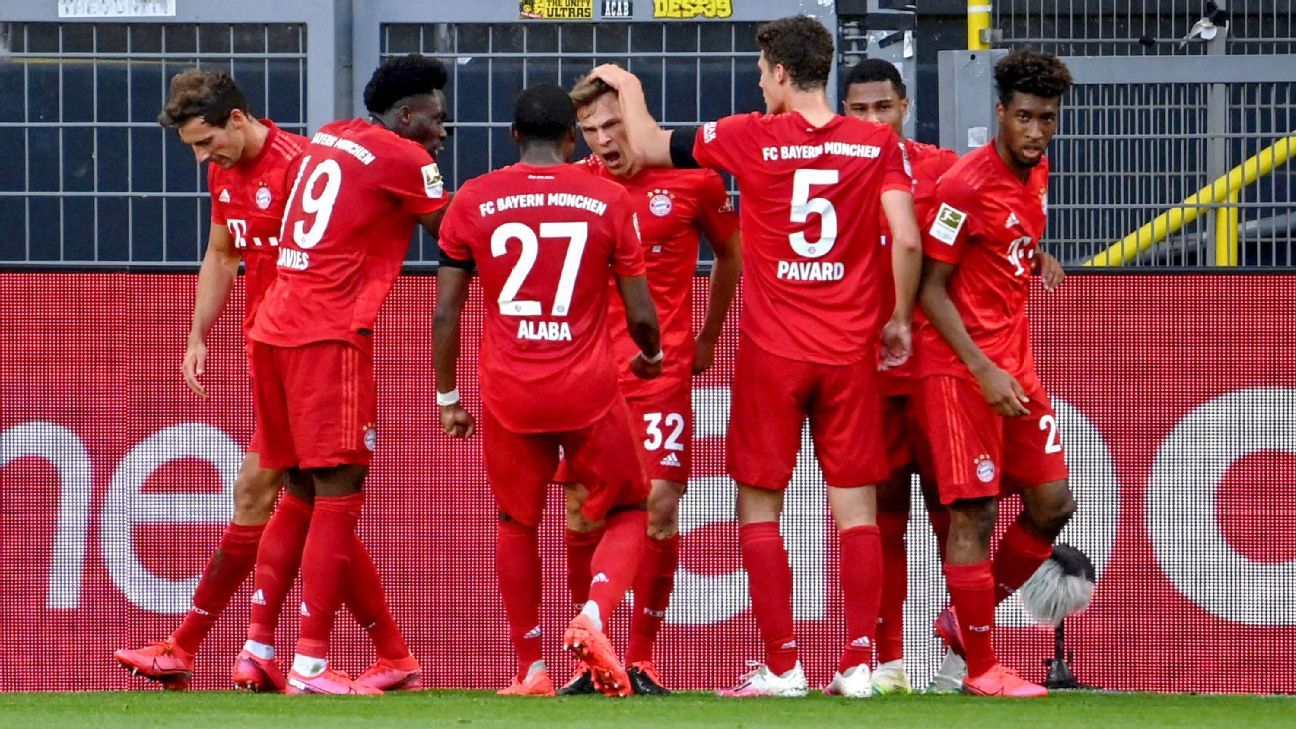 
Bayern Munich padded their lead over Borussia Dortmund in the Bundesliga with a 1-0 win in front of no fans at Signal Iduna Park on Tuesday.

Joshua Kimmich opened the scoring for Bayern just before half-time, chipping Roman Burki with the Dortmund keeper only able to tip the ball into the back of the net.

It all started well for hosts Dortmund, who were on a six-game winning streak going into the match, with teenage sensation Erling Haaland almost scoring in the opening seconds as Bayern’s Jerome Boateng had to clear the ball off the line.

The teams split possession evenly in the first half with Bayern’s Serge Gnabry seeing the best chance of the opening 45 swept off the line just before the 20-minute mark as the visitors took a 1-0 lead into the dressing room.

“It is not that I wanted to do this,” Kimmich said. “I did not see him off his line but we were told before the game that Burki stands a bit off his line so I went for it and with a bit of luck it went in.

“It was maybe the most beautiful goal of my life and also very important.”

Lucien Favre made two changes at the break, bringing on Emre Can and Jadon Sancho for Thoman Delaney and Julian Brandt, respectively, to help his team find a way back into the match.

Haaland’s 58th minute strike appeared to be headed for the back of the net, but took a slight deflection off Boateng’s arm and no penalty was given.

Bayern’s organised defence continued to frustrate Dortmund throughout the second half and Favre made another change just after 70 minutes, substituting Haaland for U.S. teenager Giovanni Reyna.

Mahmoud Dahoud forced a save from distance in the 80th minute from Manuel Neuer, but the Germany international parried the swerving shot away from goal as Bayern continued to cling to their lead.

Dortmund have now been shutout in each of their last three Bundesliga meetings against Bayern Munich, who went seven points clear in the table with the win as they seek an eighth-consecutive German top-flight title.

Despite the commanding lead in the table with just six games remaining, Bayern boss Hansi Flick wouldn’t be drawn on whether or not his team had secured the title.

“I do not live in the future. The here and now is important,” Flick said. “We wanted to win today and take a big step forward. We did that. We were focused, decisive and courageous at times. I am satisfied with my team.”

Meanwhile, Flick’s opposite number Favre conceded that bridging a seven-point gap in the remaining games would be tough.

The Bundesliga became the first major league to restart 10 days ago after a break of more than two months due to the COVID-19 pandemic, with games played without supporters to reduce the risk of infection.