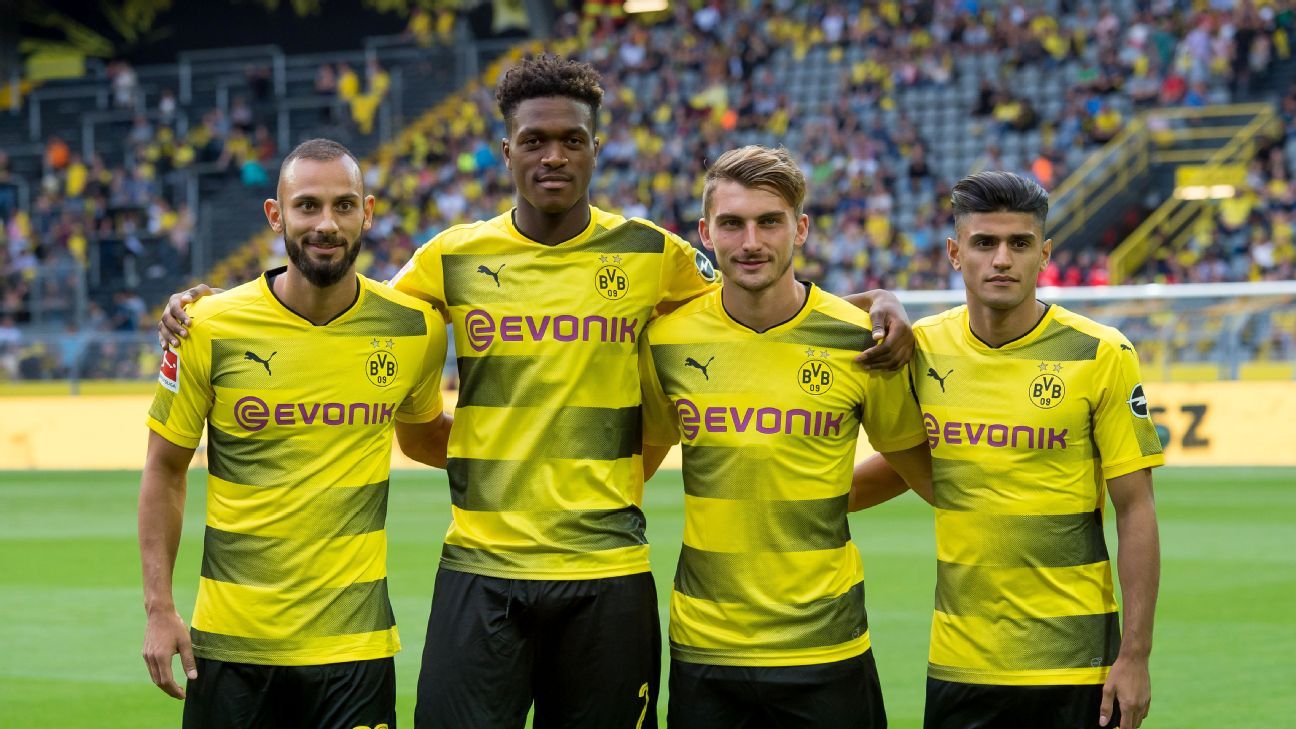 
The international break brought a quick halt to Borussia Dortmund’s strong start to the Bundesliga campaign, which sees them on top of the table after Matchday 2.

In the first two matches, Dortmund impressively demonstrated a good mix of aggressive counter-pressing and ball retention that allowed them to thoroughly dominate two teams that were trying their luck with a passive defensive shape. Without a doubt, the two wins helped to answer a few initial questions and bring calm to an otherwise heated situation surrounding the club amid Ousmane Dembele’s transfer to Barcelona, which did not exactly go over quietly.

But of course, there are still several questions to be answered going into an exciting period that will entail seven matches within 21 days for Dortmund. Can they continue where they left off ahead of the international break? How will Bosz’s team handle the strain of playing football twice a week? And how will the new additions integrate?

Although only hindsight will provide answers, at least on paper Dortmund have done well in the transfer window despite losing a key player in Dembele.

Six goals in four matches over all competitions already proves how significant it was to hold on to Pierre-Emerick Aubameyang. Just as the reinvigorated Mario Gotze and Nuri Sahin could be seen as new additions altogether.

In Mahmoud Dahoud, BVB have found a midfielder that can link attack and defence in central midfield like Ilkay Gundogan once did so impressively.

Omer Toprak is an upgrade over both Sven Bender and Matthias Ginter in the centre-back position, and 18-year-old central defender Dan-Axel Zagadou has the potential to become a big name very soon as he combines a physical posture with technical ability and footballing IQ.

Twenty-three-year-old Maximilian Philipp is a reliable Bundesliga winger, who slots right in while injury-prone Andre Schurrle and Marco Reus are sidelined.

Furthermore, the club has addressed their lack of cover at full-back by bringing in 23-year-old Jeremy Toljan, who can play on either side and has the potential to grow into a starting role at right-back as 32-year-old Lukasz Piszczek starts to get up there in age.

Andriy Yarmolenko — although not bringing the same levels of excitement of Dembele — will provide BVB with a healthy amount of goals and should fit into Peter Bosz’s system after he learns the ins and outs of the club’s counter-press. The 27-year-old Ukrainian should have enough experience to overcome obstacles like the language barrier and could reach his peak in Dortmund with the quality being raised around him.

And lastly, 17-year-old Jadon Sancho, who from Manchester City’s youth outfit is the first Englishman to play for BVB, is Michael Zorc’s latest bet on a highly talented attacker that could follow the path of Dembele or Christian Pulisic within the next few years.

To summarise, Dortmund’s squad for the 2017-18 season is more balanced than last season’s outfit due to smart additions to the defensive ranks and has gained both depth and quality. And an €80 million profit thanks to selling Dembele as the second-most expensive player in history, means the Westphalians still have some cash to splash if need be come January.

On paper, BVB can confidently aim toward second place in the league. Now it will be on Bosz to make the most of his talent-filled roster.

The Dutchman’s managerial skills will be put to a thorough test on Saturday afternoon as Dortmund visit Freiburg. The Ruhr side have won all of their last 12 matches against Christian Streich’s side. However, a 13th win is not a foregone conclusion ahead of a crucial Champions League tie away to Tottenham Hotspur on Wednesday.

Although Freiburg, in the end, lost 4-1 against Leipzig a fortnight ago, they showed that their playing style is suited to evade an aggressive press like both Leipzig and Dortmund exercise. The Breisgau could very well ask a few new questions of BVB’s defence by keeping hold of the ball for longer than Berlin and Wolfsburg managed.

Seeing how this Dortmund side reacts once their first waves of counter-pressing are beaten, should give further indication to how well they will fare against more skilful opposition in the Champions League. At least on Saturday, the individual quality should be enough to deal with Freiburg.

There is the worry of Pulisic not being at his best after straining during an unsuccessful trip with the U.S. national team. The 18-year-old has been the difference maker in attack thus far for the Black and Yellows but is likely to start from the bench on Saturday. With Yarmolenko probably also not being ready to start after having hardly trained with the squad, it could be left to Shinji Kagawa to unlock Freiburg’s defence.

Going forward, however, there will be more worries for Bosz about who to drop rather than who to pick. Team captain Marcel Schmelzer has been declared fit for Freiburg, while Julian Weigl will still have to wait a few days longer until making his comeback. But as the likes of Dahoud, Toljan and Torpak settle in, the fight for starting positions at Dortmund will be brought to a whole new level. And that will ultimately bring the team forward.