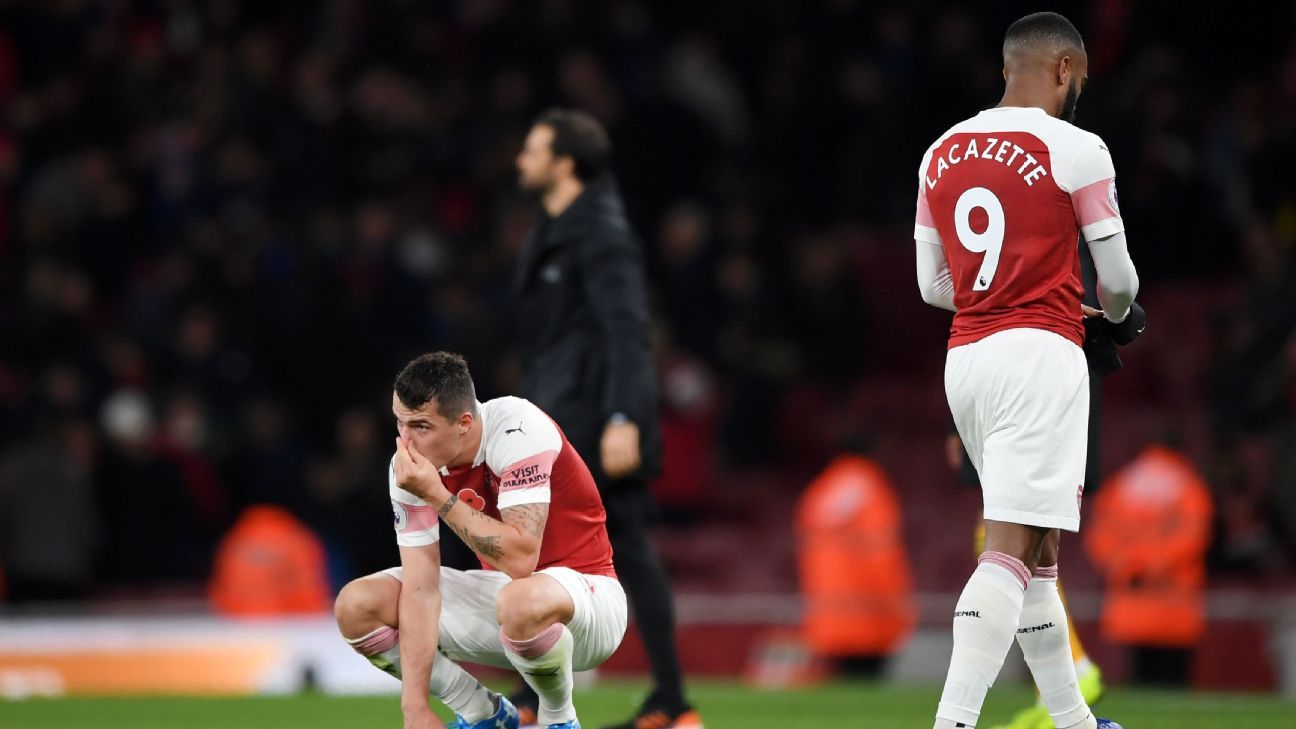 
LONDON- Henrikh Mkhitaryan’s late goal rescued a point for Arsenal against Wolverhapton Wanderers on Sunday, as the Gunners fought back for a 1-1 Premier League draw at home for the second week in a row.

With their attack stuttering throughout the game, Arsenal needed a slice of luck to find a leveler as Mkhitaryan’s cross toward Pierre-Emerick Aubameyang floated over the striker and straight into the far corner in the 86th minute.

It canceled out Ivan Cavaleiro’s first-half opener for Wolves, who took full advantage of a dreadful mistake by Granit Xhaka to launch a quick counter-attack. Xhaka had inexplicably gifted the visitors the ball when he let a simple pass from Lucas Torreira roll past him in midfield.

It was a disappointing performance from the Gunners, who nonetheless exteneded their unbeaten streak to 16 games in all competitions.

Unlike last weekend’s 1-1 draw with Liverpool, there weren’t many positives to take from this one. The loan bright spot was goalkeeper Bernd Leno, who bailed his team out on a number of occasions to keep them in the game and prevent Wolves from scoring a late winner. The centre-back pairing of Shkodran Mustafi and Rob Holding also had another solid game despite repeatedly being left exposed on counters.

This was one of the worst first halves Arsenal have produced in the Premier League this season, which is saying something considering they have a habit of being slow out of the gates. They managed to improve slightly after the break, but this team still seems to lack a real identity on the pitch. Had Arsene Wenger still been in charge, the team would have been booed off both at half-time and after the final whistle. As it is, fans remain patient with Unai Emery’s rebuilding project, but a few more performances like this could test that patience quickly.

5 — Arsenal’s first-half struggles are becoming a chronic problem and Emery has yet to figure out how to get his team firing from the opening whistle. He tried to adjust at half-time, switching formations to a 4-4-2 and substituting the ineffective Alex Iwobi for Matteo Guendouzi, but it didn’t have the desired effect. He also needs to get more out of this high-powered attack.

GK Bernd Leno, 8 — Faultless on the goal but made three good saves to keep Arsenal in it, and another to prevent a later winner for Wolves. Increasingly looking like the team’s permanent No. 1.

DF Hector Bellerin, 6 — Made a number of good raids down the flank in another attack-happy display, but couldn’t produce an end product. Missed a great second-half chance by shooting high, but should have had an assist when Aubameyang hit the post from his cross.

DF Shkodran Mustafi, 7 — Had to be alert throughout as Wolves continually threatened on counters and helped prevent a second goal with several good interventions.

DF Rob Holding, 7 — Like Mustafi, did well to deal with Wolves’ pacey forwards and stood up solidly in the box to block shots and deal with crosses.

DF Sead Kolasinac, 5 — Struggled to cope with Wolves’ pace on counters and gifted them a great chance for a second goal when he totally whiffed on an attempted clearance. Also gave the ball away several times in attack with sloppy passes.

MF Lucas Torreira, 6 — Tried to will Arsenal back into it in the second half and tested Rui Patricio with a long-range strike. Did his usual job of winning the ball back in midfield.

MF Granit Xhaka, 4 — Total brain-freeze in the lead-up to Wolves’ goal, offering another reminder that the midfielder is still too mistake-prone. Came crashing down to earth after a stellar performance against Liverpool.

MF Mesut Ozil, 6 — Was involved in the team’s few dangerous attacks going forward in the first half but flitted in and out of the game too much. Needs to do more to back up both his salary and the captain’s armband.

MF Alex Iwobi, 5 — Too many misplaced passes in the final third, and rarely seemed to be on the same page as Bellerin when they tried to link up in attack. Pulled at half-time as Emery switched formations.

MF Pierre-Emerick Aubameyang, 4 — Ineffective out on the left flank in the first half and then missed a great chance in front of goal in the second. The club’s record signing has to put those away.

FW Alexandre Lacazette, 5 — Lacked service for much of the game and was quiet on the evening .

MF Matteo Guendouzi, 6 — A solid but unspectacular display in midfield after coming on at the break.

MF Aaron Ramsey N/R — Made Arsenal look more dangerous going forward in the last 15 minutes and tested the goalkeeper with a decent shot.

MF Henrikh Mkhitaryan, N/R — Rescued a point for his team with his first goal since the loss to Chelsea. His cross wasn’t intended as a shot but hopefully the goal will boost his confidence.