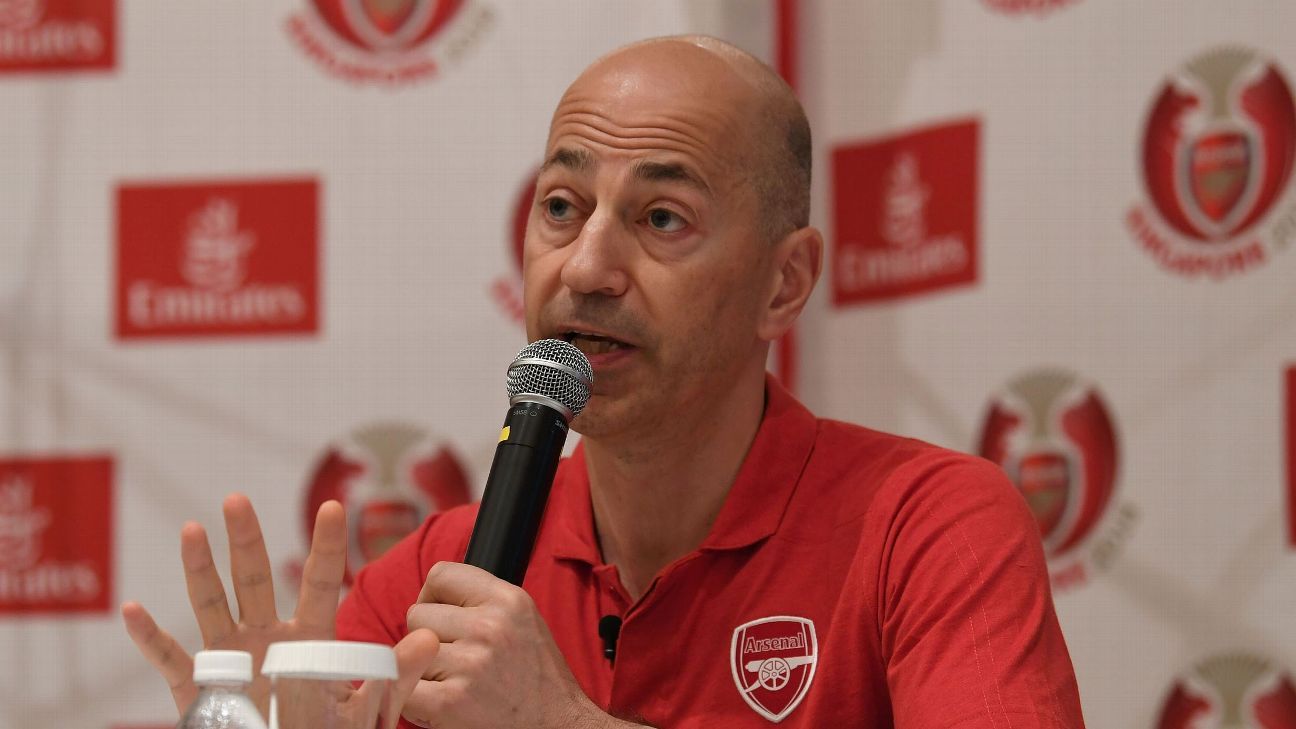 
Editor’s Note: Ivan Gazidis’ departure from Arsenal was confirmed less than 24 hours after Gab Marcotti’s article on the CEO’s impending departure from the Emirates.

Unai Emery is reinventing Arsenal on the pitch, but the man who set the wheels of change in motion — and who was at the heart of the last few seasons’ palace intrigue — is on his way out.

Arsene Wenger departed after nearly 22 seasons as manager in May. In August, Alisher Usmanov agreed to sell his 30 percent stake in the club to majority owner Stan Kroenke. And now Ivan Gazidis, the club’s chief executive since January 2009, is on the verge of leaving Arsenal to take a similar job at AC Milan.

While the power struggle at Arsenal was never quite as binary as some made out, there’s a certain irony to the fact that Gazidis, the last man standing as Wenger decamped the club, should now opt to move on.

Gazidis’ name was first linked to the Serie A club in mid-July after it was taken over by Elliott Management, following the default on a loan by Li Yonghong, the Chinese businessman who had himself acquired the club from longtime owner Silvio Berlusconi in the spring of 2017. Milan president Paolo Scaroni was asked directly about Gazidis in an interview published Friday in Gazzetta dello Sport and replied: “There is no rush and we don’t want to rush Elliott. There is no deadline. Let’s just say the problem will be resolved within a couple weeks.”

Yet sources in Italy, London and the United States (where Kroenke is based) confirmed Gazidis has been negotiating his exit from Arsenal. The process is far from straightforward given the nature of his contract, but one source said he expected it to be a matter of “weeks, if not days.”

Arsenal director of communications Mark Gonnella told ESPN FC that “no decision has been made and when it is made the club will let everybody know.”

Elliott Management has reportedly sounded out other candidates for the role, such as Roma chief executive Umberto Gandini, who had previously spent 23 years at Milan during the Berlusconi era and whose long CV includes a stint as vice president of the European Clubs Association. But according to sources, Gazidis remained the front-runner.

What still does not add up is why Gazidis would find the Milan offer so tempting.

Contrary to reports in England, this isn’t about money. Sources familiar with the situation insist Gazidis’ base salary would not be substantially higher — in fact, it’s likely to be lower — at Milan. There would be a bonus structure in place and possibly even some equity, but it’s likely to be predicated on the club growing revenue quickly, and that is by no means guaranteed.

Gazidis does have a decades-long relationship with Gordon Singer — the son of Elliott’s founder, Paul Singer — who heads the London office. And of course, it’s entirely possible that Gazidis simply relishes the challenge of restoring one of the biggest brands in world football back to its past glory.

That’s the operative word: challenge. Here you wonder how much Gazidis can do, and how quickly he can do it.

Elliott have already filled two key roles at Milan, appointing club legends Paolo Maldini as director of sporting strategy and development and Leonardo as sporting director. Now, after balancing their squad out over the summer, they’re turning their attention to the final big role in the puzzle.

As for Elliott themselves, the hedge fund has been pretty consistent over the years in sticking to its core mission: delivering returns to its shareholders by any means necessary. When they’ve taken control of companies in the past (this is Elliott’s first venture into sports), usually as a result of a default on debt like with Milan, they’ve either broken them up and sold off the parts or restructured in a way to make them more efficient and then sold them on.

Scaroni said Elliott were thinking in the medium and long term. Li bought Milan at a valuation of €740 million (around $815 million at the time) but because of the default, it has cost Elliott little more than half that to take control, according to most estimates. If they wanted to simply make a quick buck, you’d imagine they could quite easily “flip” the club, selling it in the €550-600 million range, if not more. The fact that they haven’t — along with the hiring of Maldini and Leonardo and the pursuit of Gazidis — suggests they are thinking longer term. Turn the club around and then find a buyer for a big return in three to five years.

So now that Milan’s plans are taking shape, what makes it a more appealing prospect than Arsenal?

When Gazidis was first linked to a move away from Arsenal, some dismissed it immediately. After all, with Wenger gone, he had free rein in rebuilding the side on the football pitch. It was a process that began even before the Frenchman announced his departure in the spring. (According to multiple sources, the decision that the 2017-18 campaign would be Wenger’s last, one way or another, was made well before his announcement, freeing Gazidis to prepare for the future.)

In November, Gazidis hired Sven Mislintat (previously of Borussia Dortmund) as head of recruitment, effectively replacing Steve Rowley, who predated even Wenger at the club. And in March, Raul Sanllehi moved to London from Barcelona, taking the title of head of football relations.

Even at that point the club’s new structure was taking shape, with Sanllehi responsible for everything football-related and Vinai Venkatesham, the club’s chief commercial officer, handling everything else. Both would report directly to Gazidis. The final piece of the puzzle was the manager to replace Wenger, and the choice was Emery, who was appointed in May with the title of head coach (and with far less clout than his predecessor).

It’s a setup that may have its critics but ultimately mirrors the top clubs in Europe. While Kroenke was very fond of Wenger on a personal level, he felt the restructure was necessary and perhaps even overdue. He also believed that Gazidis was the safe pair of hands to help navigate the club’s transition into the post-Wenger era.

Gazidis was among the three highest-paid executives among top European clubs, but Kroenke was convinced he was worth every penny. It explains why the initial reports of Milan’s interest weren’t taken very seriously not just by Kroenke, but by multiple individuals who’ve known Gazidis on a professional level for a long time. It’s true that Arsenal is a rebuilding project, but so too is Milan, and there is little question they are far behind the Gunners in that regard.

That is where the challenge lies. Milan haven’t finished in Serie A’s top five since 2012-13. While they drew nearly 53,000 fans per game last season, they don’t own the San Siro, which limits their matchday revenues. And while Elliott are far more solid (and liquid) owners than Li’s group, Milan’s losses in past seasons mean they will be restricted by UEFA’s Financial Fair Play regulations. (The best-case scenario is that thanks to the change in ownership, they will sign a “voluntary agreement” allowing them to breach requirements in the short term, but even then this isn’t a Sheikh Mansour-at-Manchester City scenario.)

Then there’s the obvious fact that while Serie A is making a comeback, it still can’t hold a candle to the Premier League in commercial terms. Plus the fact that Gazidis has spent his entire career in the United States and England, meaning this would be an entirely new footballing culture for him.

This link has caught a number of people off guard at Arsenal, not least the ones who joined in part because of Gazidis’ experience and charisma. It has all added to the air of uncertainty at the Emirates, particularly given the fact that it has dragged on for several months. Some observers have even blamed it for affecting the club’s contract negotiations, like the one with Aaron Ramsey.

Joining Milan would unquestionably be a roll of the dice for Gazidis. In the meantime, what is evident is that the past two months have helped neither Arsenal nor Milan, both of whom would have benefited from a quick resolution. Nor have they helped Gazidis. That’s why his imminent farewell from the Emirates will be greeted with sighs of relief and closure all around.