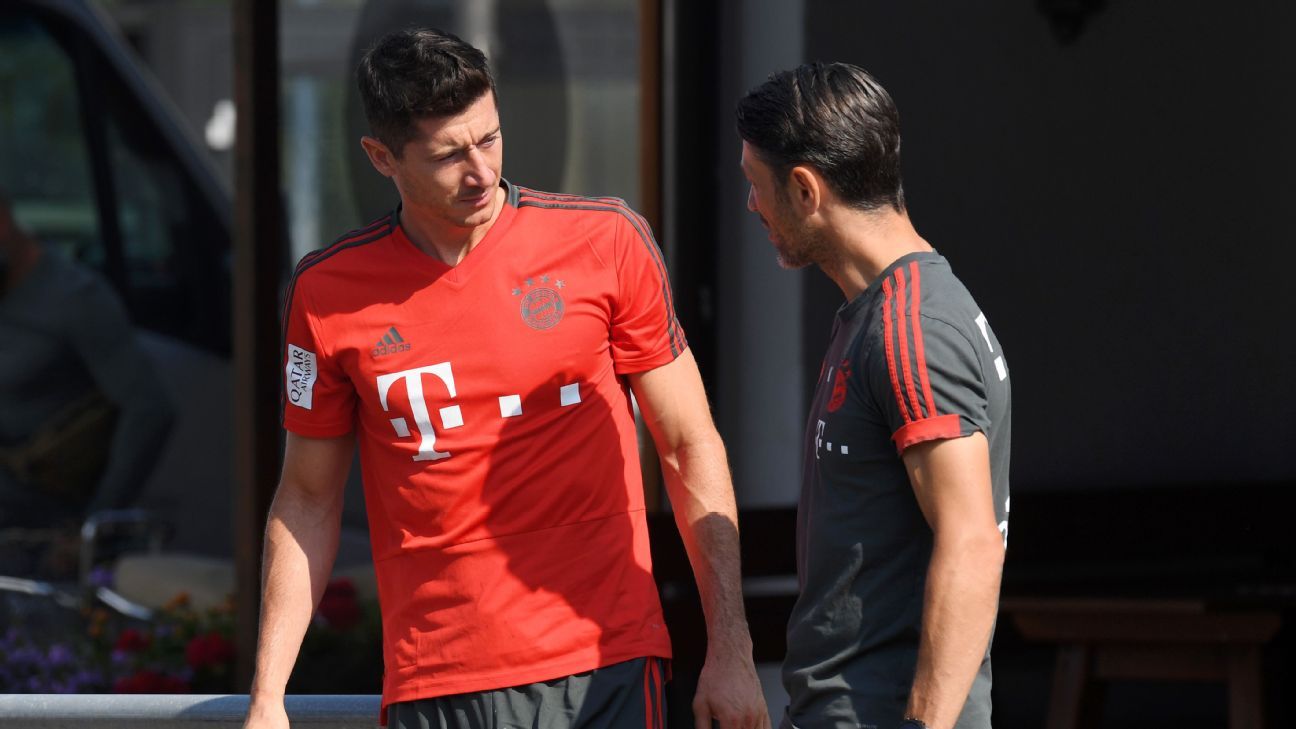 Lewandowski, 30, asked to leave the German champions as he felt “an easy target” after Bayern’s disappointing end to last season, losing in the Champions League semifinals to Real Madrid and a shock DFB Pokal defeat to Kovac’s former employers Eintracht Frankfurt.

However, Bayern bosses held firm and wouldn’t consider selling their top scorer, despite president Uli Hoeness claiming Bayern could have raked in at least €150 million for his services.

Kovac, 46, had sympathy for Lewandowski’s predicament, speaking at his first Bundesliga press conference as Bayern coach.

“As an outsider, you have to step into his shoes,” Kovac said. “He expressed himself very professionally, he didn’t want to go on strike nor sit in the stands. That speaks in his favour. Our talks were highly inspirational, not as his trainer but on a personal level.

“I understand his worries, he was feeling misunderstood, I had that as a player in my career so I was able to appreciate his perspective. Our talks were open and honest. We hid nothing, neither of us putting on a mask, speaking face to face — that is the best way to sort things in order to enjoy success in the future together.

“Every person needs recognition and support. Robert said he didn’t feel he enjoyed this. But he is now fresh, motivated and his head is right. He has trained and played exceptionally and scored four vital goals. We can rely on him to give his all for the club. I am looking forward to this and the club, fans and the whole team are too.”

Bayern begin their quest for seven Bundesliga titles in succession with a home game against Julian Nagelsmann’s Hoffenheim on Friday. Kovac revealed that Bayern will have almost a full-strength squad at his disposal with only Serge Gnabry ruled out with “muscle problems.”

“We will have a lot of tough decisions to make this season,” he said, discussing his star-studded squad and the prospect of rotation. “The players on the pitch are superstars, those on the bench are superstars and the players sitting in the stands too. But like everybody else, we can only play 11 men with seven on the bench.”

The futures of Sebastian Rudy, Juan Bernat and Jerome Boateng still undecided approaching the final week of the transfer window though Hoeness said at the weekend that there is a 50-50 chance of Boateng joining PSG.

“I will be happy if none of the three players leave us,” Kovac said. “There’s been a lot of talk, much of it hot air — with Mats [Hummels], Jerome and Niklas [Sule] we have three world class centre-backs, which only two or three clubs in the world can boast.

“We shouldn’t forget that we are fighting on four fronts. Travelling costs the players a lot of energy. Accordingly, I would actually be very happy if our squad stayed intact.”

“The transfer window ends on Aug. 31,” Kovac said. “Should Rudy stay here, he’ll be in competition like any other player and get his playing time. If he leaves the club, he’s still a very good player.”