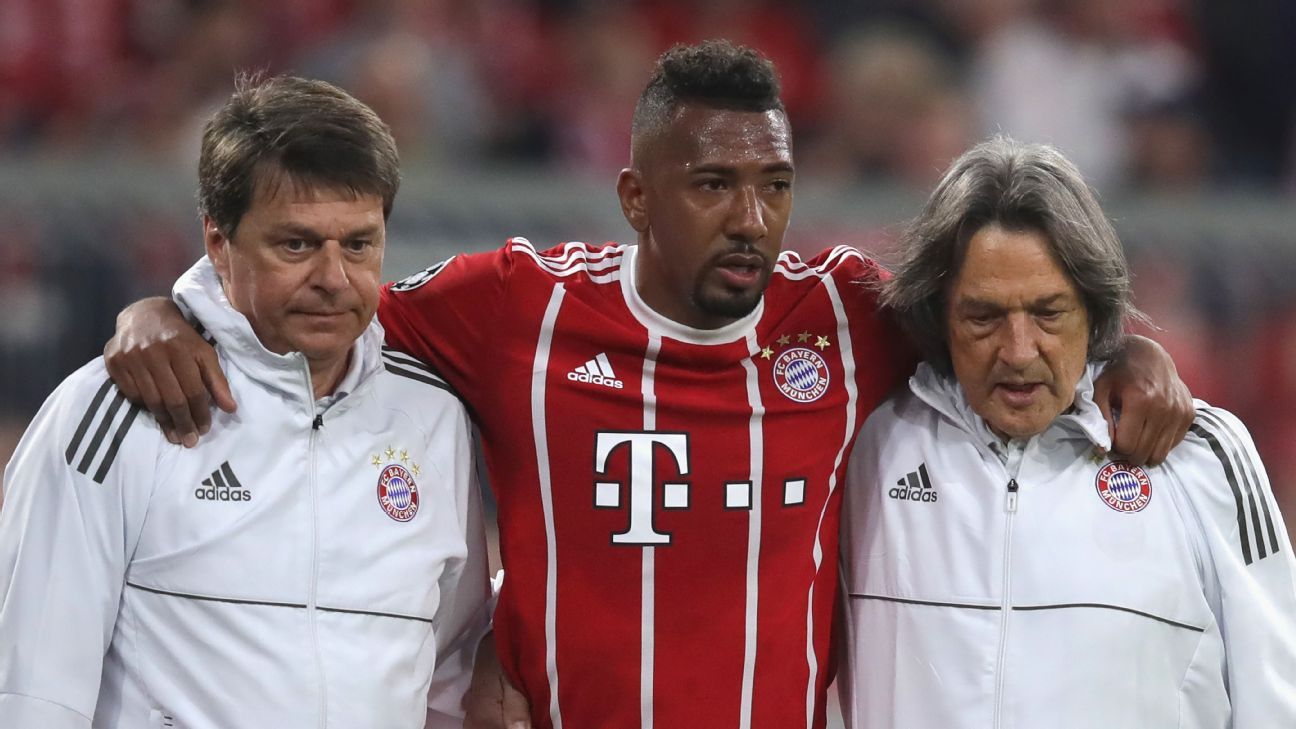 
MUNICH – Bayern Munich boss Jupp Heynckes is confident that Germany international Jerome Boateng will return in time to play in the World Cup.

Boateng, 29, suffered a thigh muscle injury in Bayern’s 2-1 Champions League semifinal first-leg defeat to holders Real Madrid on Wednesday and had to be substituted on 34 minutes.

Reports in Germany suggested that the 2014 World Cup winner could be ruled out for up to six weeks, placing his hopes of travelling to Russia this summer in serious jeopardy.

“I don’t see absolutely any danger of him missing the World Cup,” Heynckes said at a news conference ahead of Bayern’s Bundesliga game against Eintracht Frankfurt. “On the contrary, if I have understood Doctor Muller-Wohlfahrt correctly, he’ll be back in training before. Of course, Jerome will play at the World Cup.”

Arjen Robben suffered a muscle injury too and had to be taken off in the eighth minute. Heynckes confirmed that although Robben “is doing relatively well” it was still too early to say whether he would return at the Bernabeu on Tuesday.

He added: “It’s always very difficult to diagnose what exactly it is with the nerve, muscle or back — we’ll have to wait and see.”

Alaba missed the first leg with a thigh problem but “trained without any pain” on Friday and is expected to be fit following “three more training sessions.”

Meanwhile, Martinez suffered “light bruising to his skull on Wednesday” but “didn’t have concussion.”

“I think he’ll be able to take part in light training on Saturday and will be available on Tuesday,” Heynckes said.

Heynckes confirmed that he will take the opportunity to call up “great talents” Meritan Shabani, Niklas Dorsch and Lukas Mai to the squad. Mai, 18, made his full debut in last week’s 3-0 Bundesliga win in Hanover.

Heynckes may also choose to rest Thomas Muller, who only did “light running” on Friday after “suffering a knock to the ankle,” and also James Rodriguez after he couldn’t train with the team but worked out in the fitness centre instead.

The coach said he doesn’t expect an easy game for his injury-hit side against visitors Eintracht Frankfurt, coached by his successor next season, Niko Kovac.

“I think that my players will already have the game on Tuesday in Madrid in the back of their minds,” he said.

Asked how his side had reacted to the midweek disappointment against the Champions League holders, he said: “We licked our wounds yesterday, as professionals we have to deal with success and failure, taking motivation from defeats. There’s a good mood and positive atmosphere again today, I don’t see any after effects from Wednesday.”

Reacting to the criticism for his top scorer Robert Lewandowski, who missed a couple of vital chances, he added: “His performance would be totally differently evaluated if he scores in the 88th minute or if his header goes into the corner. We would be singing his praises then.

“Look at Ronaldo, look at how many touches he had. Did you count? I’ve spoken to Robert and hope that he gives the answer on Tuesday on the pitch. As a striker myself, I know that you will be criticised for not taking chances. Tuesday is the best opportunity to give his response,” he said.