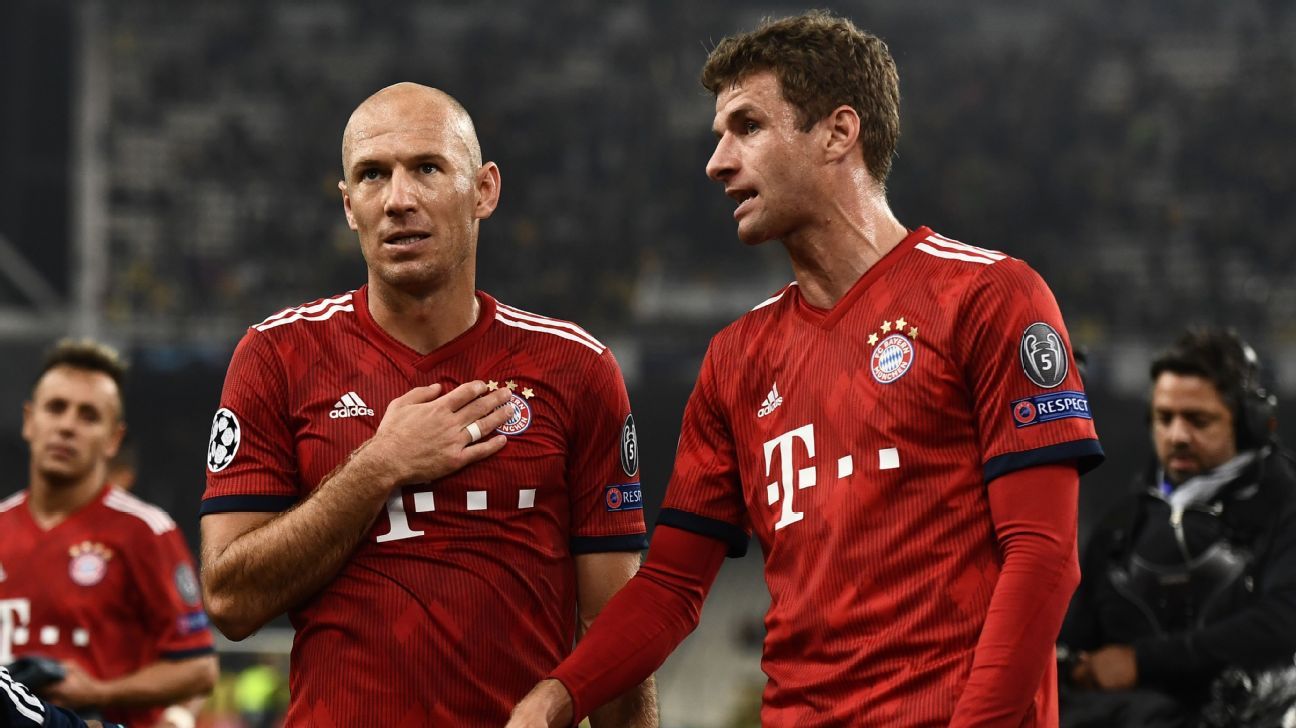 A few months ago, Thomas Muller offered a rather gloomy insight into the psyche of a Bayern Munich player. “We win in order to be left in peace,” the forward revealed in an interview with The Players’ Tribune.

Bayern teammate Arjen Robben pretty much said the same thing on Tuesday night after the team beat AEK Athens 2-0 in the Champions League. “Everything is calm if you win,” he said. “The more games you win, the calmer it gets.”

By winning in Athens, their second largely untroubled win in a week after a 3-1 at VfL Wolfsburg on Saturday, Niko Kovac’s men went some way towards quashing the crisis talk of the last few weeks. But Bayern’s yearning for peace and quiet is destined to continue for a little longer as the uneven performance in the Greek capital threw up a few too many troubling concerns to silence the noise altogether.

First though, the positives. Bayern defended very well; AEK hardly had a shot. In possession, the Germans remained patient, controlling ball and opposition on a slippery pitch until the Greek resistance was broken twice in three minutes just after the hour mark by Javi Martinez and then Robert Lewandowski. Little effort, minimum fuss, and zero artistic flair: top teams win dozens of games that way every year.

Kovac, a member of the early 2000s Bayern side who were masters of routine and slightly dull 1-0 wins, was unsurprisingly pleased. “We played a very, very good game tonight,” he said.

If “very good” was code for doing exactly what’s necessary, Kovac was right. Defender Joshua Kimmich seemed to have a similar view, saying: “As long as we win, I don’t care at all whether we’re brilliant or not.”

Bayern were a long way away from brilliant, however. In fact, their attacking play lacked so much guile, precision, pace and ingenuity that it was hard to claim it all didn’t matter in light of the scoreline.

To his credit, Mats Hummels didn’t shy away from criticism. Afterwards the centre-back felt moved to speak about the “fundamental, recurring issues” within Bayern’s game — namely a tendency to lose the ball in dangerous areas and to over-elaborate in inopportune moments. “We need to develop a feeling for these situations, in order to prevent them or at least make them happen less frequently,” he said.

Hummels was at pains not to mention specific players but that didn’t make the defender’s intervention any less stinging. Whose fault is it if the team continue to make same, systemic mistakes? Hummels’ teammates must be either incapable of listening or are not getting coached well enough in the first place.

Either interpretation — or both put together — feed into the overarching worry that this season’s combination of an inexperienced manager and a squad in a holding pattern won’t do much for Bayern’s ambitions of winning the treble.

Those doubts, rarely articulated in public, are at heart of the bosses’ thin-skinned nervousness they involuntarily demonstrated at Friday’s car-crash news conference, and it is not helped by the low public standing of sporting director Hasan Salihamdzic. When the Bosnian told Sky Germany that his position inside the club “was very strong” on Tuesday night, it immediately brought to mind a line from “Game of Thrones” about those forced to emphasise their own status: ‘Any man who must say I am king is no true king.’

Following on from his conspicuously limited input at the aforementioned news conference, the suspicion remains that the club could really do with a more forceful, authoritative person in such a key role — someone to keep the myriad egos in check and to provide a more analytical view on the squad’s performance levels. Salihamdzic has so far been unable to become the link between Kovac, the board and dressing room.

As Robben acknowledged, Bayern can only hope to curtail these debates with a series of wins before the winter break and a meeting with Borussia Dortmund in two weeks’ time offers a huge chance to show that the criticism — whether internal or external — might be somewhat overblown.

But at the same time, every one of the next three Champions League matchdays will have the capacity to put their collective regression into sharper relief still. Compared to the bewildering fluidity of Manchester City, or the assured domination of Juventus, Bayern look too much like a side in need of ideas and inspiration to find any lasting tranquillity.