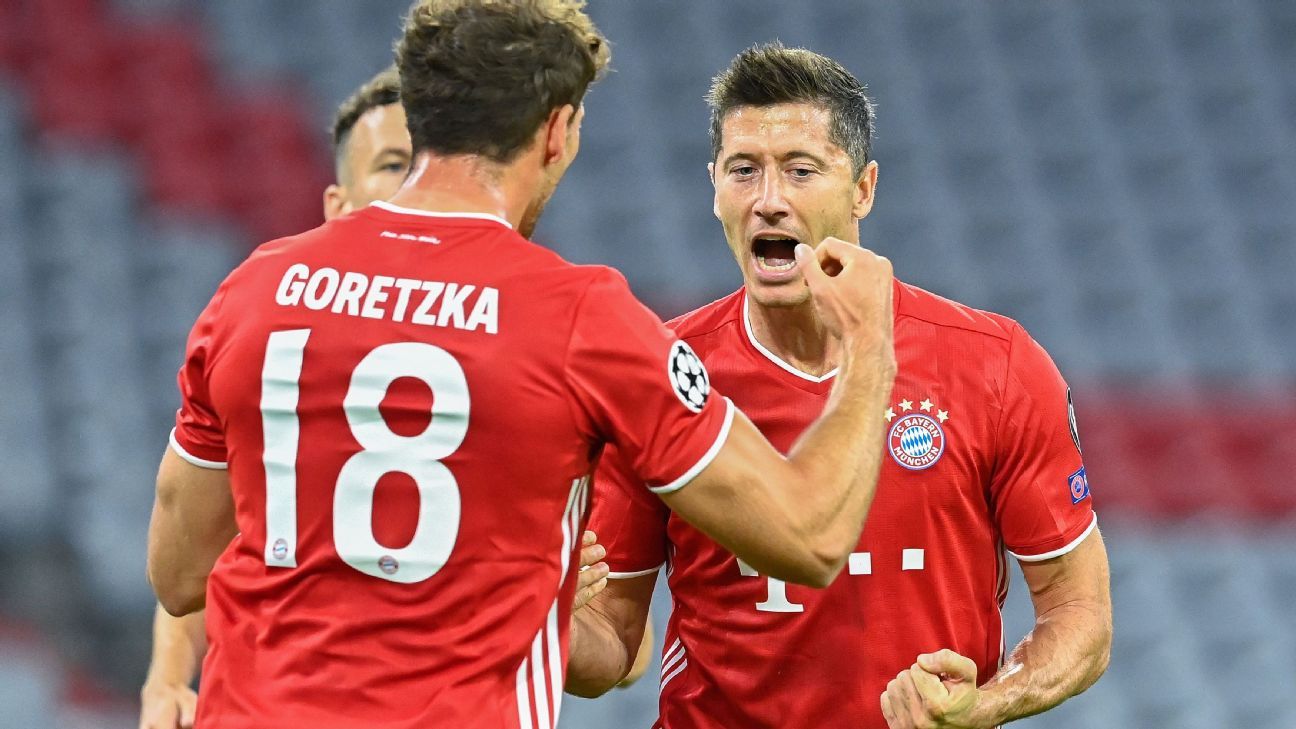 
Robert Lewandowski struck twice and set up two more goals as Bayern Munich cruised past Chelsea 4-1 on Saturday to reach the Champions League quarter-finals with a 7-1 aggregate victory and remain on course for a treble of titles.

The Bavarians will be on an 18-game winning streak across all competitions as they head into next week’s Final Eight tournament in Lisbon, where they will face Barcelona.

“We’re already excited. Barca are a quality side but we want to compete with them,” Bayern defender David Alaba said. “We will go to Portugal with confidence and, after the last few months, we have nothing to hide from.”

Bayern, who won the domestic league and Cup double and have won all eight of their Champions League games, quickly killed off the tie with a ninth minute Lewandowski penalty, after having won 3-0 in London in the first leg in February.

Polish striker Lewandowski, with 53 goals in 44 matches in all competitions this season, turned provider to set up Ivan Perisic in the 24th minute as the hosts showed no lack of fitness despite a five-week gap since their last competitive game.

Chelsea, who conceded seven goals in a two-legged European tie for the first time, did not lack match practice having played in the FA Cup final last week.

But half a dozen players were missing through injury, including Cesar Azpilicueta, Christian Pulisic and Pedro, or suspension.

“We had individual errors that gave them goals and at this level that will finish you off,” Chelsea coach Frank Lampard said. “It is a good exercise for us to go up against Bayern and their Champions League experience, with a lot of our players having debut seasons.

Chelsea did get onto the scoresheet with Tammy Abraham‘s tap-in from a Manuel Neuer pass a minute before the break but it was Bayern who were in control in the second half.

Bayern substitute Corentin Tolisso restored their two-goal lead in the 76th minute with a well-timed volley from a Lewandowski cross.

The forward then bagged his second eight minutes later with a towering header to make it 13 goals in the Champions League this season, confirming Bayern’s status as one of the favourites for the title.

The three-month stoppage caused by the COVID-19 pandemic means that the remainder of the Champions League will be played at neutral venues in one-legged showdowns.

Scotland are back at the Euros, and they’re hoping to put 23 years of hurt behind them
Denmark sends emotional message to Christian Eriksen after star’s cardiac arrest
Juventus, Milan, Man United eye Keylor Navas as PSG set for Donnarumma
Copa America – Twelve members of Venezuela delegation test positive ahead of opener vs Brazil
Man City’s Joao Cancelo to miss Euro 2020 due to COVID; Portugal call up Diogo Dalot