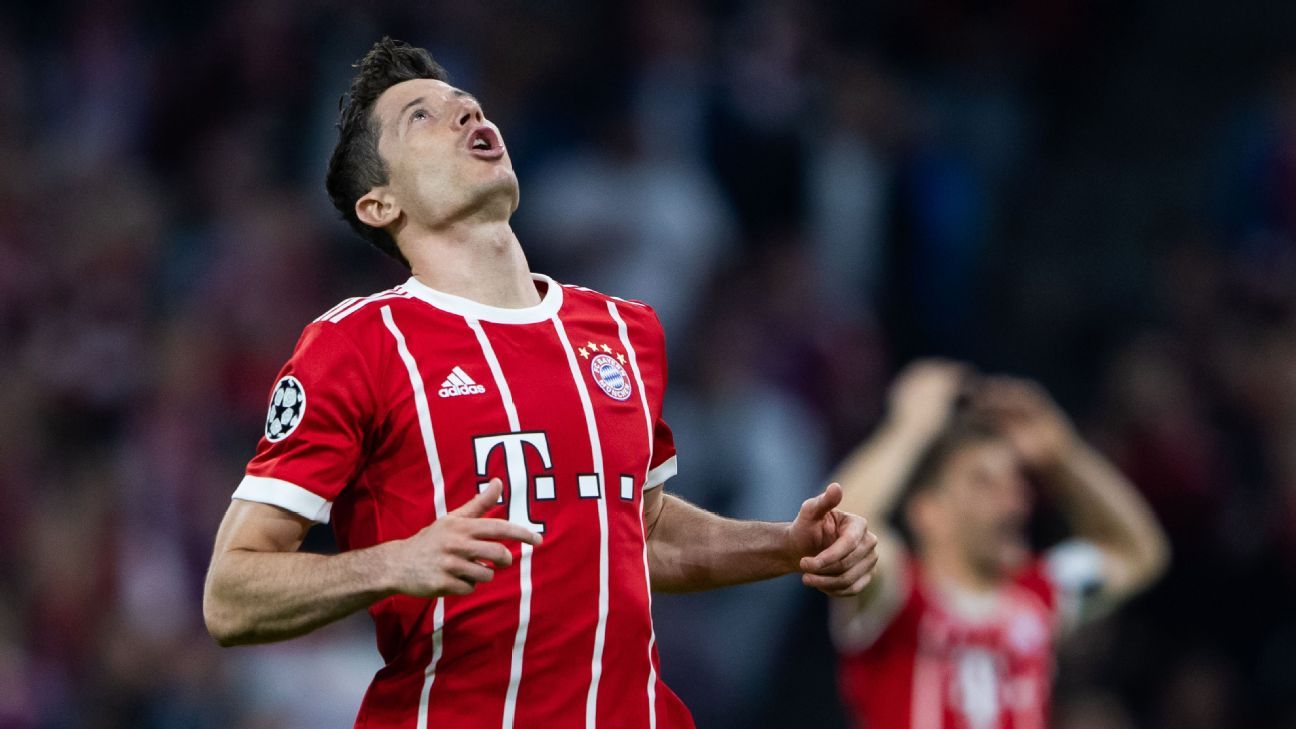 
Prematch statements rarely rise above the bland and banal at this level, but Bayern Munich’s representatives offered quite a revealing insight into their hopes and fears ahead of the Champions League semifinal second leg in Madrid.

Shortly before boarding the plane to the Spanish capital on Monday, executive chairman Karl-Heinz Rummenigge ruminated darkly on UEFA’s call-up of Turkish referee Cuneyt Cakir (“There’s no point saying anything now, but he’s refereed an incredible amount of Real Madrid games in the past”) and demanded the sort of dogged attitude that rank outsiders often cite as crucial if they are to cause an upset in a game against Bayern.

If Bayern are to stage a successful comeback for the first time in their history after a first-leg home defeat at Champions League level, helpful refereeing, a strong blue-collar ethos and good fortune are unlikely to be enough, however. They will also need their star man Robert Lewandowski to turn up, at last.

As Rummenigge pointed out in light of the criticism that was directed at the Polish striker last week, Lewandowski is having a very good season by objective standards. Thirty-eight goals in 43 games (preseason Super Cup excluded) so far leave little to be desired. “He’s a goal machine,” Rummenigge, himself a superb former forward, said. Only the fabled Gerd Muller, Bayern’s best-ever striker managed a better hit rate (0.9 goals per game) than Lewandowski has mustered. He’s averaged a quite spectacular 0.78 goals per game since joining the Reds in 2014.

Yet the debate surrounding the 29-year-old is not quite as “ridiculous” as the Bayern boss suggested.

The ex-Borussia Dortmund striker, signed on a free after a year-long pursuit, was meant to be the missing piece in a puzzle of near-world-class players. Bayern had always had top midfielders and defenders, and in the 2013 Treble-winning team, they had two of the best wingers in the game, Franck Ribery and Arjen Robben. Lewandowski was the first forward since the heyday of Rummenigge in the early ’80s who was coveted by the biggest clubs in the world — the goal machine that would deliver more European trophies, as Bayern believed.

He was bought for nights like Dortmund’s semifinal with Real Madrid in 2013, when he scored four times, and nights like Tuesday, when Bayern need goals against the world’s most efficient club team, with a depleted squad in a hostile environment, and with a referee in charge who might not favour them.

Up until now, it hasn’t quite worked out that way.

In the 2015 semifinal against Barcelona, Lewandowski played with a mask after a clash of heads and wasn’t quite himself, missing a chance in the 3-0 defeat that proved very costly. A year later at the same stage, he was on target for the winning goal in the 2-1 win vs. Atletico Madrid, but Bayern were knocked out on away goals after Thomas Muller missed a penalty. No blame whatsoever can be attached to the Poland international for last season’s quarterfinal exit against Real Madrid; a shoulder injury stopped him from playing in the first leg, and he wasn’t really in any position to influence the second leg either. His side were knocked out 4-2 in extra time.

It would be grossly unfair to point the finger at the striker for any of those past reversals, but public opinion will be less charitable if he is once again a non-entity on Tuesday. His failure to get on the score sheet despite having at least one clear run at goal last week, although lamentable, was not even the biggest concern. Former Bayern keeper Oliver Kahn noted that Lewandowski needed “to be seen more” in a game of such magnitude. He had indeed looked uncharacteristically passive and ineffective in the build-up play, just as he had done in the previous round against Sevilla.

Lewandowski without goals can still be a formidable presence, creating space for others and linking up play with runners from deep. But in the Madrid game, he had cut a forlorn figure, playing within himself, in splendid isolation from his teammates. The match had passed him by.

On the eve of the second leg, Jupp Heynckes was forced to deny rumours that the centre-forward had left an underwhelming impression in training, too. “He’s been training well,” the 72-year-old insisted, before revealing that he had sought out Lewandowski for a talk. Whether he’s been unsettled by incessant talk about a move away from Sabener Strasse in the summer or simply out of form is impossible to say.

For Bayern, though, the upshot is the same. They need goals, and they’ll need them from him — Robben is out, Ribery is ageing and Muller will be stationed out wide on the right in place of Robben. All their courage, hard work and fight will come to nothing if Lewandowski doesn’t step up to force the issue.