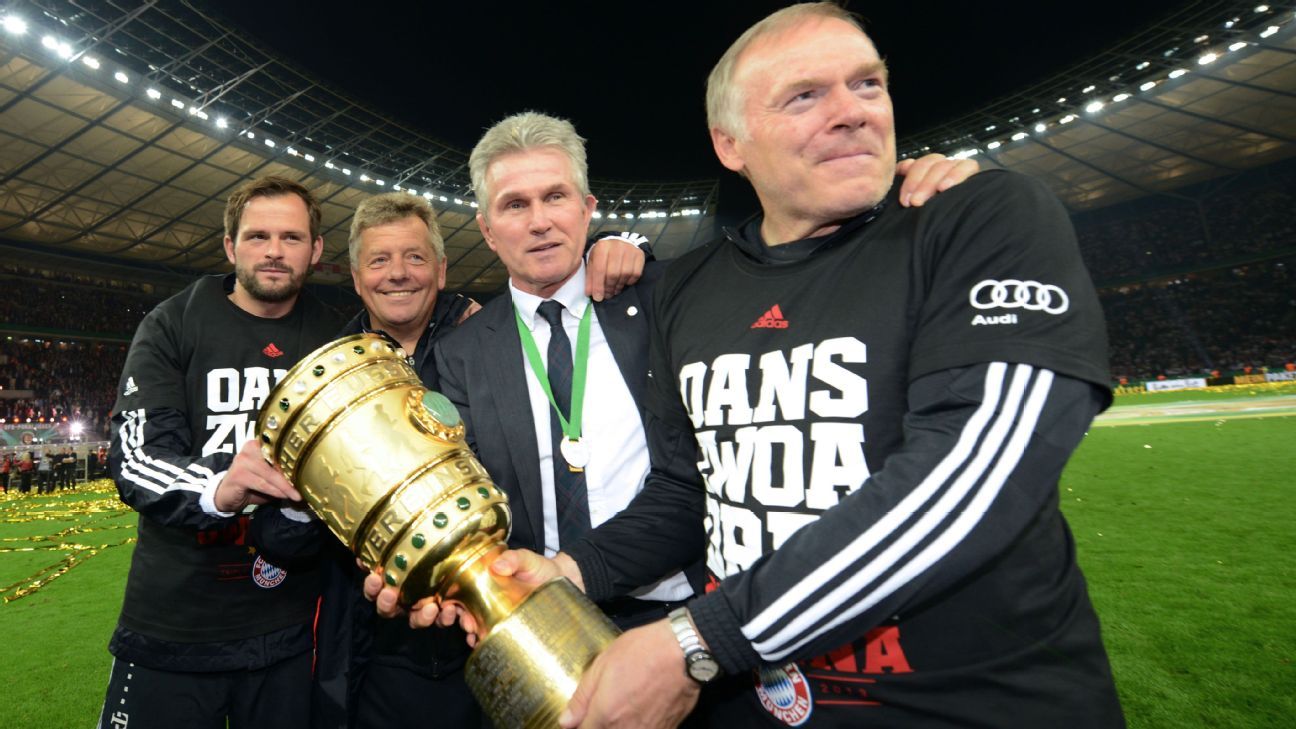 
Bayern Munich have confirmed the appointment of former head coach Jupp Heynckes until the end of the season.

Heynckes returns for a fourth spell in charge of the German giants following the departure of Carlo Ancelotti earlier this month.

Bayern announced the appointment of Heynckes, who has won the Bundesliga three times and the Champions League once across his previous spells at the club, via their Twitter accounts.

BREAKING: Jupp Heynckes will take over as #FCBayern head coach until the end of the season. pic.twitter.com/ZEFakBJ6Hp

The 72-year old wants to bring in Fortuna Dusseldorf assistant coach Peter Hermann as his assistant . Hermann was Heynckes’ No. 2 when Bayern won the Treble in 2013 and he confirmed to Bild that he has asked to be released from his contract with 2. Bundesliga leaders Fortuna, which runs until the end of the season.

“Yes I want to do it,” he said of the prospect of linking up with Heynckes again. “I received an offer from Jupp to go to Bayern with him and I want to do it. I have spoken with Fortuna and, of course, [Fortuna coach] Friedhelm [Funkel] too — it’s what I want to do.

“It’s something special with Jupp. It’s not easy for me to leave here but Fortuna is top of the table and on the right path. Tears will flow anyway.”

Hermann was Heynckes’ assistant between 2009 and 2013, with two-year spells at both Bayer Leverkusen and Bayern.

Hermann was later quoted in kicker as saying after Fortuna training on Friday that he was hopeful a move could be forced through.

“I do think an agreement will be reached,” he said. “It’s really difficult for me but Jupp and I have experienced so much together and I want do him this favour. I have so much to be thankful to him for and would like to give something back in return.”

With promotion to the Bundesliga on the line, Bild suggested Fortuna can earn at least €20 million by reaching Germany’s top tier.

Funkel said: “I would have preferred to keep him [Hermann]. I have to think about how to proceed.”

Heynckes, meanwhile, has received the backing from Bayern defender Jerome Boateng and Germany boss Joachim Low to take over the Bundesliga champions for a fourth time.

Heynckes had been in retirement since winning the Treble with Bayern in 2013, when Boateng was an integral member of the side.

“If it happens, I think it’s the best solution for Bayern and the team,” Boateng told reporters on his return to the international fold after an absence of 12 months in Germany’s 3-0 win in Northern Ireland. “It’s a great solution for the whole club because he knows it inside out. He is a brilliantly intuitive trainer, who I think gets on well with the hierarchy.

“He is massively experienced, already knows many players and all about the Bundesliga and international football. He knows how to handle players, not only superstars, but also players who aren’t first choice and not playing regularly. He can offer the team new momentum and make it better.”

“He’s an unbelievably experienced coach and, of course, he has a great aura too,” he said. “In the situation that Bayern finds itself, it’s a very good solution. If he comes back a few more times then perhaps he will become my successor at some stage!”