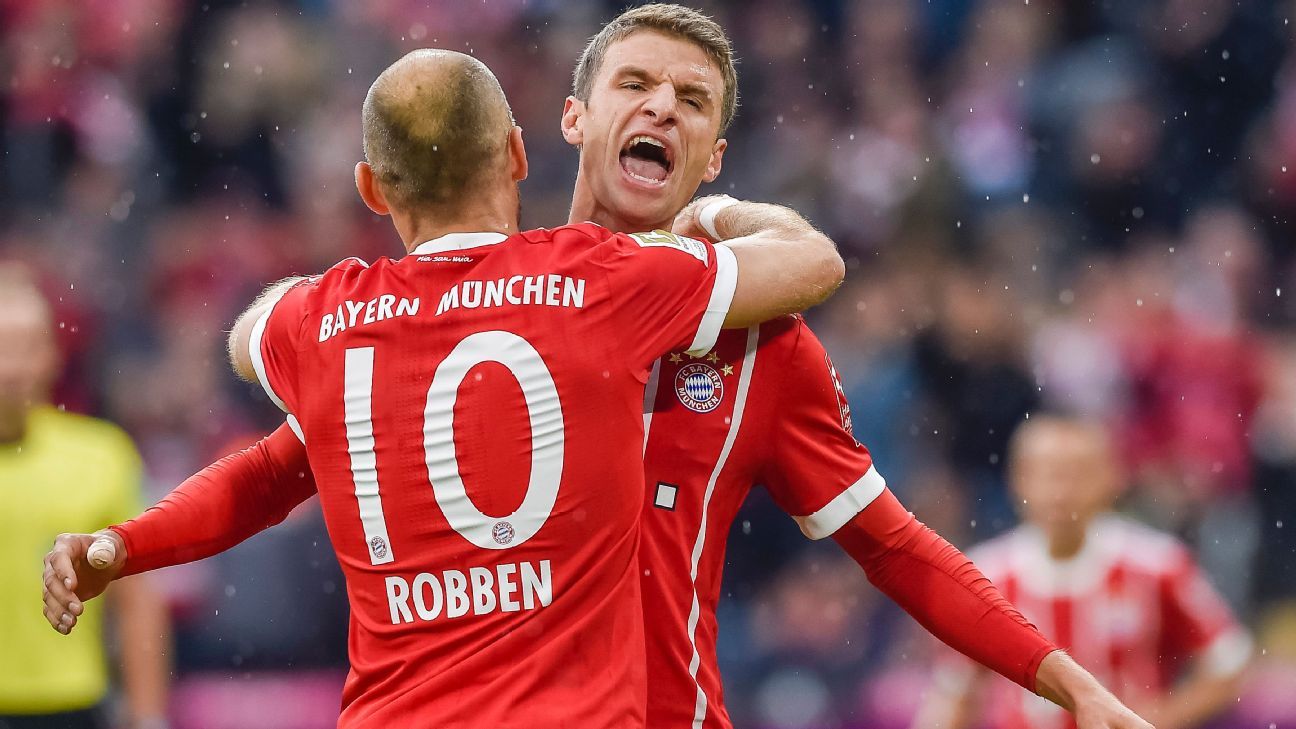 After a timid loss in Hoffenheim — their earliest defeat in a season since 2011 — the Bavarian bandwagon got back on the road on the day that Munich’s Oktoberfest got underway. Key defender Jerome Boateng enjoying a successful comeback and this was Muller’s most effective performance of the season.

It is hard to criticise when the team has won 4-0 but Bayern could have hitdouble figures with better finishing.

7 — Making five changes from the Champions League win vs. Anderlecht in midweek, Carlo Ancelotti relieved some pressure with a convincing win. A tougher test awaits against much-improved Schalke on Tuesday.

GK Manuel Neuer, 8 — Even against a timid Mainz attack, Neuer had to produce fantastic stops in each half to ensure his second league clean sheet of the season.

DF Rafinha, 6 — With first-choice David Alaba still out injured, Rafinha again filled in at left-back, only really catching the eye for a bad challenge on Guilio Donati before half-time, which earned him a deserved caution.

DF Mats Hummels, 6 — Made his one and only first-team appearance during his first Bayern spell against Mainz in May 2007 and enjoyed a mostly leisurely afternoon this time around. However, Hummels will be grateful that Yoshinori Muto could not capitalise on a sloppy late mistake to ruin Neuer’s precious clean sheet.

DF Jerome Boateng, 7 — A commanding first league start since suffering an injury during the final game of last season against Freiburg. Boateng slotted in seamlessly for an hour alongside his 2014 World Cup-winning central defensive partner Hummels, before being replaced by Niklas Sule having just picked up a yellow card.

DF Joshua Kimmich, 8 — Two more superb assists, but Kimmich is still prone to the odd defensive lapse and he was fortunate to go unpunished by a weak Mainz side. A team-best 144 touches of the ball, he constantly displayed incisiveness and quality going forward.

MF Arturo Vidal, 7 — Always to the fore, his seven attempts on goal were the most by any player. Repeatedly denied by the overworked Rene Adler in the Mainz net, Vidal also headed against the bar immediately before his substitution with 19 minutes remaining; no doubt he was hooked early with the game at Schalke in mind.

MF Thiago, 7 — Influential as always but will be tested more in Gelsenkirchen on Tuesday.

MF Kingsley Coman, 6 — A bright performance overall to end a difficult week, but the France international won’t want to watch replays of his shocking miss in the first half from close range. Coman had the beating of his marker all afternoon but again showed little end product.

MF Arjen Robben, 9 — Helped deflect Muller’s prod past a hapless Adler for the opening goal, before doubling the lead with a rare breed, a chip of the keeper with his weaker right foot that he celebrated with substitute Franck Ribery on the touchline. Robben rolled back the years with a breathtaking performance before being given a breather to a standing ovation just after the hour.

MF Thomas Muller, 8 — Turned 28 birthday on Wednesday and celebrated by adding his 97th Bundesliga goal and 97th assist on his 261st appearance. This was Muller at his most effective and a joy to watch.

FW Robert Lewandowski, 8 — Marked his 100th Bundesliga game for Bayern by adding two second-half goals to take his tally to 82. Not bad for a free transfer.

DF Niklas Sule, 6 — Gave Boateng a breather for the final half hour as Mainz were soundly beaten.

MF Sebastian Rudy, NR — Replaced Vidal with the game in the bag at 3-0 and rattled the crossbar with a thunderous strike with 10 minutes remaining.