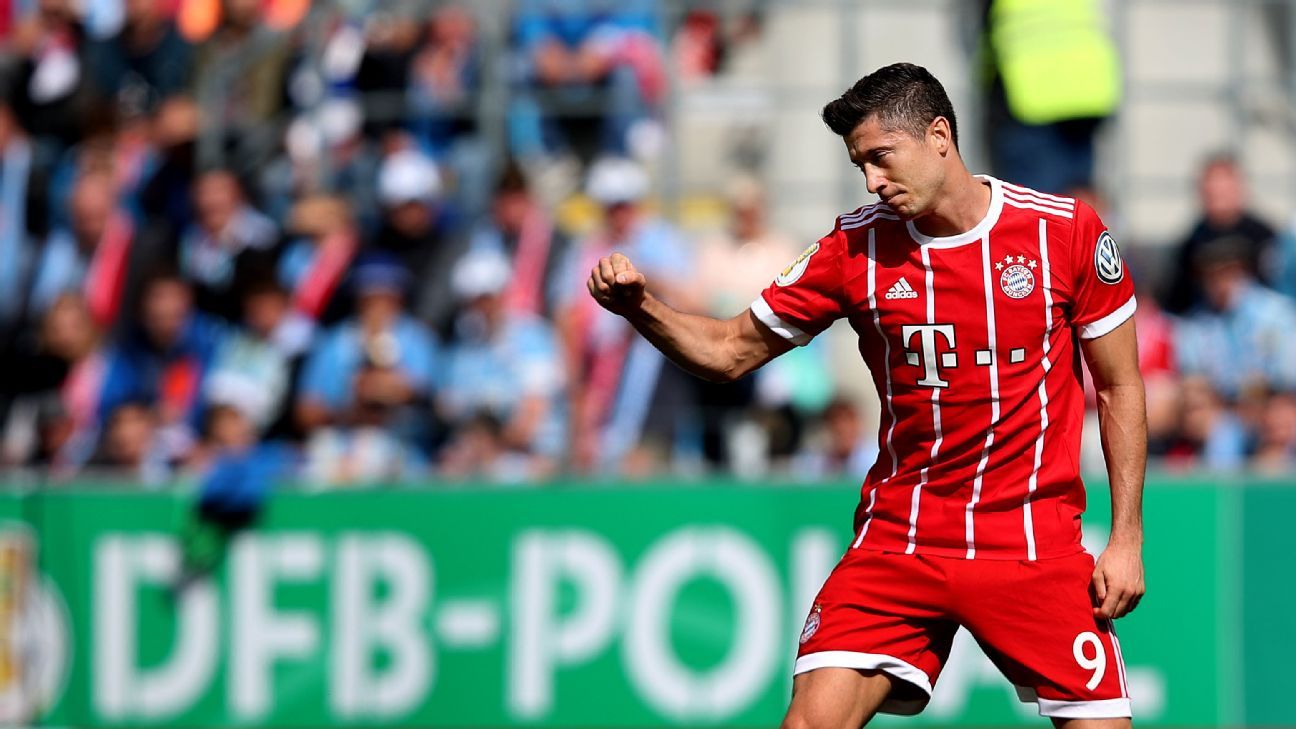 
Eighteen-time winners Bayern Munich strolled into the DFB Pokal second round with a comfortable 5-0 away victory over Chemnitz, courtesy Robert Lewandowski’s brace and goals from Kingsley Coman, Franck Ribery and Mats Hummels.

Lewandowski fired Bayern ahead on 20 minutes with the aid of a deflected free kick, which proved the difference at the interval.

Coman doubled the lead five minutes after the break from a clinical counter attack, taking advantage of a cute final pass from fellow Frenchman Franck Ribery. Lewandowski grabbed his second on the hour mark, tapping in from close range after fine work from record signing Corentin Tolisso, before being replaced by the returning Arjen Robben on 63 minutes.

Officiating in her first Bayern game, FIFA referee Bibiana Steinhaus, 38, enjoyed an untroubled afternoon in eastern Germany as the record cup winners cruised into the next round.

And man-of-the-match Lewandowski told Sky Deutschland: “I’m really pleased that we made it through the opening round. It is always important to score a few goals and make it easier for ourselves. Our opponent played very defensively, with everyone behind the ball and did not allow us much space. But we got the job done and we are in the next round.”

Elsewhere, Pierre-Emerick Aubameyang had a hat trick as Borussia Dortmund began their defence of the trophy beating FC Rielasingen-Arlen 4-0.

Marc Bartra opened the scoring early, and Aubameyang added another from the penalty spot. Aubameyang claimed his second in typical fashion after the break, accelerating away from two defenders before finishing with a chip over the goalkeeper. He took advantage of poor defending to complete his hat trick late on.

Nils Petersen opened the scoring for Freiburg in a 2-1 win at his father’s team, fourth-tier Germania Halberstadt.

Eintracht Frankfurt went down to 10 men early but still defeated fourth-tier TuS Erndtebrueck 3-0, with U.S. international Timmy Chandler getting the opener before Mijat Gacinovic and Sebastien Haller scored in quick succession in the  second half.

Nadiem Amiri scored the only goal in the 56th minute as Hoffenheim won at RW Erfurt, and Werder Bremen won 3-0 against third-division Wurzburger Kickers thanks to goals from Milos Veljkovic, Max Kruse, Maximilian Eggestein

Fortuna Dusseldorf needed extra time to see off Arminia Bielefeld 3-1, while there were also 4-0 wins for second-division sides Heidenheim and Kaiserslautern.