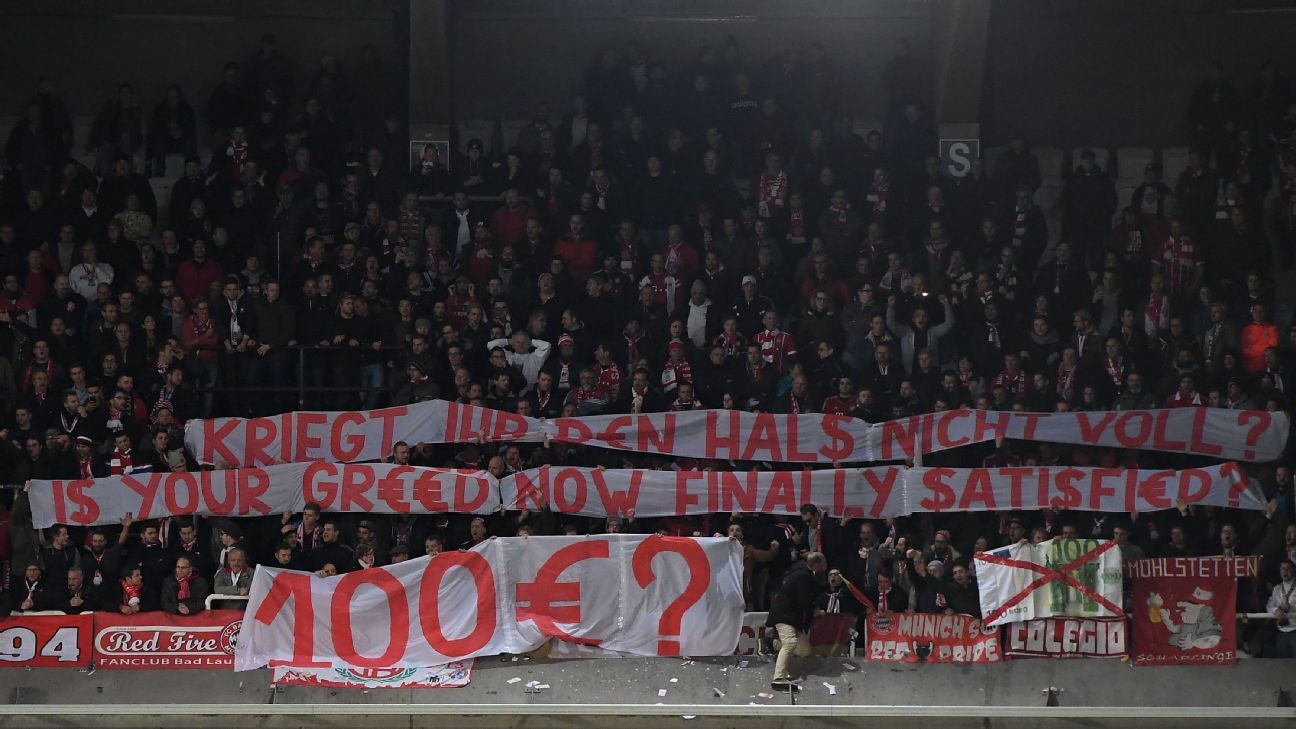 
UEFA has opened disciplinary proceedings against Bayern Munich after fans threw fake money onto the pitch in protest at ticket prices for the Champions League game at Anderlecht.

European football’s governing body said on Thursday that it was charging Bundesliga champions Bayern over an “illicit banner” and the “throwing of objects.”

The case will be heard by its ethics and disciplinary body on Dec. 7.

Bayern fans launched the fake money during their side’s 2-1 win at the Constant Vanden Stock stadium on Wednesday.

Bayern fans were charged €100 for their allocated tickets, and their protest led to play briefly being delayed.

They also displayed a banner that read: “Is your gr€€d now finally satisfi€d?”

In a statement accompanying the protests, independent Bayern fan group Club #12 said “many Bayern fans, several ultra groups among them, opted to not make the trip to Brussels” despite the champions subsidising away tickets at €70.

“This can’t be a long-term solution,” Club #12 said, adding that “protests are sadly the only option to inform the bosses in their ivory tower at UEFA that salaries for UEFA officials are not representative of the earning capacities of the average football fan.”

Club #12 said the prices had reached “a new dimension for a group stage match, even in the generally high-priced Champions League.”

The group accused Anderlecht of a breach of UEFA’s Safety and Security Regulations, which says that “unless the associations or clubs concerned agree otherwise, the price of tickets for supporters of the visiting team must not exceed the price paid for tickets of a comparable category that are sold to supporters of the home team.”

Club #12 argued that Anderlecht supporters could only buy tickets as part of a package deal including all three group-stage games, against Bayern, Celtic and Paris Saint-Germain, for a total price of €141.

It added that Anderlecht were not the only club to have bypassed the UEFA regulation, urging the governing body to close the loophole.

“We ask UEFA to implement the regulations which have been existing for years,” Club #12 said, demanding that away fans be allocated some tickets not priced higher than the cheapest tickets for home supporters. “We would welcome it if Bayern would lead the way.”

Bayern fans protested at Arsenal ticket prices in the Champions League in October 2015, with a group boycotting the first five minutes when the sides at the Emirates Stadium.