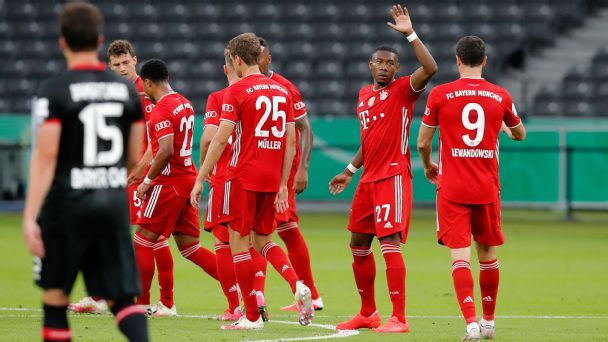 
Bundesliga champions Bayern Munich secured their second consecutive domestic double on Sunday with a 4-1 win against Leverkusen in the German Cup.

Leverkusen were on the hunt for their first title in 27 years — their last win was the German Cup in 1993 — and were hopeful 21-year-old Kai Havertz would be the key to that.

Despite pulling one back in the second half, a devastating 10 minutes in the first-half sunk Leverkusen’s hopes of derailing Bayern’s dominance in Germany.

David Alaba opened the scoring for Bayern in the 16th minute with a well-taken free kick after a silly foul by Edmond Tapsoba on Robert Lewandowski just outside the penalty area.

Serge Gnabry made it 2-0 eight minutes later. A pass from Joshua Kimmich let the 24-year-old away on the right-hand side. After taking a moment to compose himself, Gnabry hit a low precise shot across Lukas Hradecky for Bayern’s second.

Despite failing to register a goal, Leverkusen had several good shots and would have gone into the dressing room at half-time disappointed at the scoreline.

Bailey had the chance to make it 2-1 on 31 minutes but failed to convert. Havertz orchestrated the attack, playing in Moussa Diaby who crossed the ball in to Bailey. However, the winger failed to control the ball and his shot flew over the crossbar.

Had Bailey showed better control, the goal would have been unlikely to stand with replays showing the Jamaica international was marginally offside.

Leverkusen came into the second half with it all to do but a mistake from goalkeeper Hradecky on 59 minutes saw Lewandowski score his fifth Cup goal and his 50th goal in all competitions this season.

Lewandowski found himself in all sorts of space after a long ball from Manuel Neuer and hit a powerful half-volley from 25 yards out. Hradecky stopped the shot but the ball fell out of his hands and bounced into his own net. Despite a desperate attempt to wriggle the ball out of the goal, the 30-year-old managed to only push the ball further into his own goal.

Sven Bender did pull one back on 65 minutes from a close range header following a corner.

The goal marked an increase in tempo from Leverkusen and Bayern were put under pressure following several good chances.

Leverkusen’s “King Kai” put several promising crosses into the box with each just missing their target and Bailey saw a shot head over the bar after a slight deflection.

Bayern never looked like settling down though and Lewandowski secured his second on 89 minutes with a dink over Hradecky.

The drama didn’t finish there with Havertz scoring a penalty in the 94th minute following a handball in the box.

In the end, Bayern held Leverkusen off and go into the Champions League — where they will play Chelsea — with the hope of securing three trophies this season.

The win marked Bayern Munich’s 20th German Cup title in their 24th final appearance, while no other German club has more than six such titles