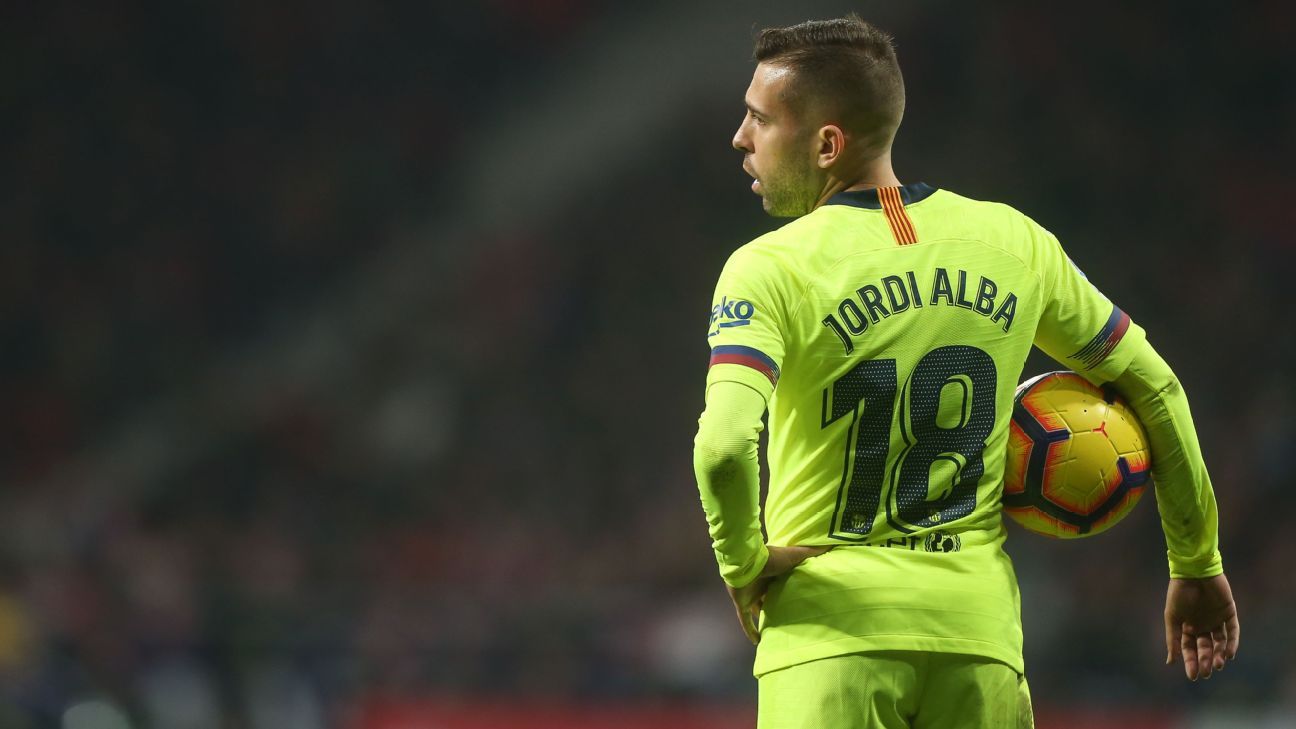 
Barcelona left-back Jordi Alba has said it is “strange” that the club have still not offered him a new deal but stressed it remains his intention to finish his career at Camp Nou.

Alba, 29, is out of contract in 2020 and talks have not yet begun over new terms despite Barca’s former director of football Raul Sanllehi, now at Arsenal, promising him a new deal over two years ago.

With the defender moving into the final 18 months of his current contract, he’s been linked with Manchester United and Juventus in recent weeks, but he says he has no plans to leave.

“[There’s] no renewal news, it’s something which is still there,” he told reporters after Barca’s draw with Atletico Madrid on Saturday, confirming what sources had told ESPN FC last week. “I don’t know what the club think of me, it’s a bit strange because there’s not long left [on my contract].

“My intention is to end my career here. Let’s see.”

Alba, who re-joined Barca from Valencia in 2012, said he has been given no clues about when — or if — the Catalan club’s hierarchy will broach the issue.

“I don’t know what the directors’ intention is or when they will think it’s convenient to call me — if they think it is,” the Spain international said.

Meanwhile, Rafinha will miss the rest of the season after rupturing a cruciate ligament in his left knee during Saturday’s draw against Atletico Madrid.

❗INJURY REPORT. @Rafinha has a torn left ACL and will undergo surgery in the coming days. pic.twitter.com/tk3Y7XIVPT

The midfielder, who was sidelined for eight months in 2017 with a meniscus problem in his other knee, will undergo surgery in the coming days. Sergi Roberto will also be sidelined for up to a month after pulling a hamstring against Atletico.

Roberto’s injury leaves Barca short in the full-back positions, with Alba the only left-back in the first team squad and Nelson Semedo now the sole right-back.

With Rafinha and Roberto both missing for a chunk of time, coach Ernesto Valverde may look to give more minutes to Carles Alena and Denis Suarez.

Barca face PSV Eindhoven in the Champions League on Wednesday. A place in the round of 16 is already assured but a win will confirm their progression as group winners, ahead of Inter Milan and Tottenham.