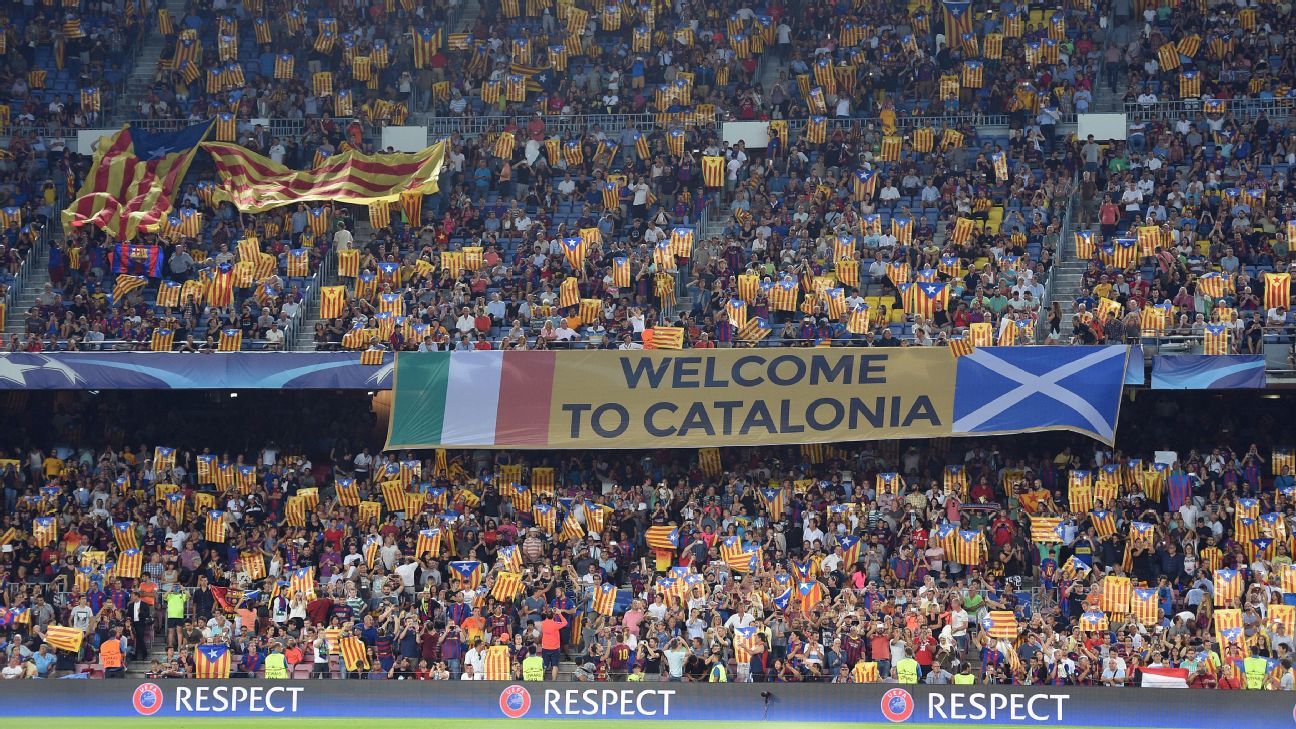 
Barcelona coach Ernesto Valverde wants to keep the focus on football after Catalonia’s parliament voted to establish an independent republic on Friday.

Barca have vocally supported the right for the people to be allowed to vote in an official referendum on Catalonia’s future and played a league match behind closed doors earlier this season to “send a message” to the world about the ongoing political situation.

But they have never positioned themselves as for or against independence, and Valverde has always steered clear of mixing sport and politics.

“It’s a strange question for a coach,” he said in a news conference when asked for his opinion on Catalonia’s unilateral declaration of independence.

“I can’t deny that I am following the situation — like everyone else — and that I have a personal opinion, but I would rather focus on sporting issues.

“What I say doesn’t mean anything. There are so many changes at the moment in the current political climate that I don’t know how it will end — it can change every half an hour.

“Today’s a day with so many things happening and changing… In my case, right now I am the coach of FC Barcelona and my job is to make sure the team to win and I am sure the politicians are trying to do the best job they can, too.”

Valverde said his players, like him, are also focused on football and that there are no political divisions inside the dressing room.

One of the unknowns of an independent Catalonia would be where the region’s top flight football clubs — Barca, Espanyol and Girona — would play their football.

“It’s a hypothetical situation and it’s certainly not my role to make any comment on that matter,” Valverde said when asked about the possibility of Barca leaving the Spanish league. “The only thing I know is that I am preparing for a La Liga game against Athletic [Bilbao] this weekend.”

Club president Josep Maria Bartomeu said last weekend that Barcelona are committed to remaining in La Liga, but the club told ESPN FC on Friday: “For the moment Barca have no plans to comment on events today.”

La Liga and the Royal Spanish Football Federation [RFEF] were not available for immediate comment on how the Catalan clubs could be affected by independence, while both UEFA and FIFA told ESPN FC they would have no comment on the situation.

Earlier on Friday, Girona insisted Sunday’s home game against Real Madrid will go ahead as scheduled despite reports that the match could be suspended.

In the meantime, Valverde is preparing his players for Saturday’s La Liga game at San Mames against Athletic, the club he left in the summer to take over at Camp Nou.

“It will be special,” he said of his return the Basque Country. “Of course, there are people [there] that I have shared lots of emotions with over the years… but this is a football match and you need to forget the niceties and focus on the game.

“I’m a professional and the objective is to win the game. Emotional matters will be left for after. I was there for four years this time, there is a wonderful atmosphere at the club and it was a great place to work, but I’m going there to win, regardless of having lots of friends there. They will still be friends whatever the result.”

Valverde also confirmed that Jordi Alba should be available for selection after missing the last three games with a thigh strain as league leaders Barca look to extend their unbeaten streak in all competitions to 14 games.