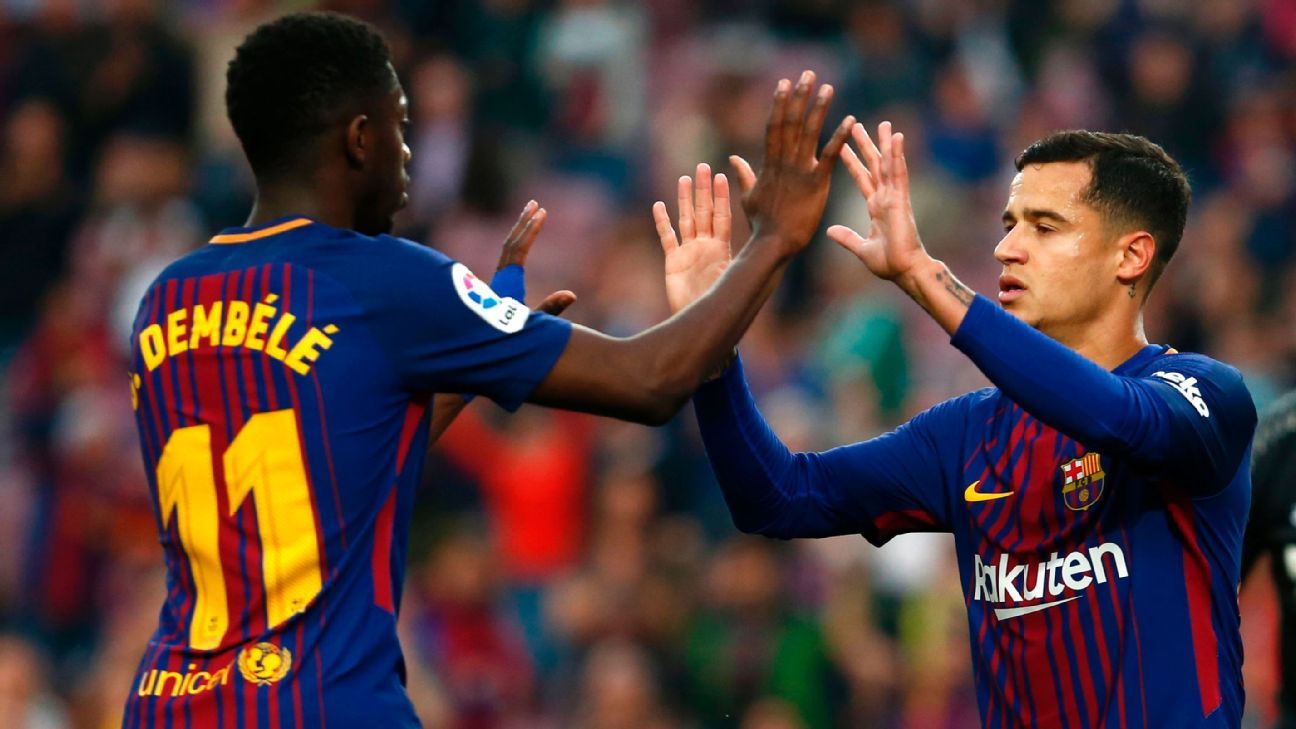 
Ernesto Valverde said it’s not a problem finding room for both Ousmane Dembele and Philippe Coutinho as he finds ways to fit Barcelona’s two most expensive signings into the same side.

The two were both regulars at the start of the season, but Valverde has preferred to use either one or the other since bringing midfielder Arthur Melo into the team against Tottenham in October.

Dembele was initially the player to drop out of the side, but it was Coutinho who lost his place for last week’s derby win over Espanyol — although both started in a heavily rotated side against Spurs in midweek.

“The coach is pro-Barca, he wants the team to win,” Valverde said in a news conference ahead of Sunday’s trip to Levante in La Liga when asked if he was pro-Dembele or pro-Coutinho.

“I understand these questions, but it’s a long way from being a problem having them both. It’s an advantage. They could even play together, as they have done this season. These questions are inevitable, but we know we have the option of using them both.”

Coutinho’s form has come in for criticism in the local media since he returned from an injury last month. The Brazil international — Barca’s record signing at €160 million — has scored five times this season, but is without a goal since opening the scoring in October’s Clasico against Real Madrid.

“I am happy with everyone,” Valverde added when pressed on Coutinho’s recent performances. “Sometimes some players play; others time others play. Of course, you always ask me about those that are not playing.

“Coutinho has given us a lot, gives us a lot and will keep on giving us a lot. Maybe he’s not started all the games but he’s started some and throughout the season he will start a lot more.”

Dembele, meanwhile, has been impressing on the pitch despite suffering punctuality problems off it. The France forward was two hours late for training last Sunday but kept his place against Spurs, scoring a brilliant individual goal in the 1-1 draw.

Dembele has scored or assisted on nine goals in his last nine games and Valverde attempted to draw a line under his discipline problems.

“It doesn’t seem like anything from another world to me,” the coach said. “In the background, managing a football team is about taking young players, who everyone wants to be a success, to win and to do well. From there, things come up, but that’s everyone’s objective.

“We try to keep everyone on the same path. Sometimes some [players] steer off it and that generates a lot of noise, but we focus on what’s important. I have always considered [Dembele] one of the most dangerous players in the world. But I also think the same about Coutinho. And about other players. We have several, that’s why they’re in the squad.”

Rafinha, Sergi Roberto and Malcom are all missing for the Levante game this weekend, although the latter two are both back in training.

Samuel Umtiti is also out with a knee injury. He is currently undergoing treatment in Qatar. Valverde said he’s “optimistic” the France defender will be able to return without undergoing surgery, but suggested the club will look to sign a centre-back in January if he’s ruled out for a sustained period of time.

Levante were the only side to beat Barca in La Liga last season — beating them 5-4 in the penultimate game of the campaign — and Valverde says that will be on his players’ minds when they look to restore their three-point lead at the top of the table.

“We know what happened there, it’s very clear in our memory,” he said. “We won’t struggle to motivate ourselves: we’re playing to stay top, there are two games left before Christmas and we suffered a lot there last year.”