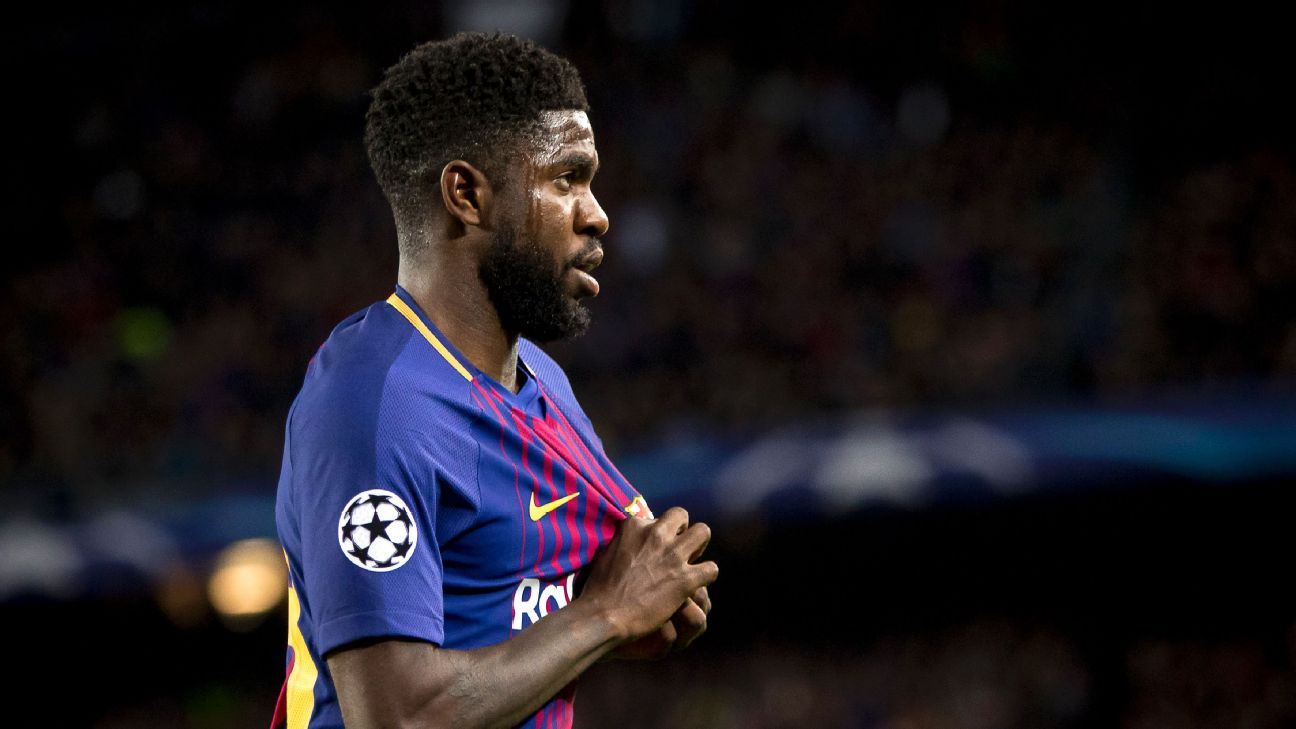 
Barcelona president Josep Maria Bartomeu says the club is keen to renew Samuel Umtiti’s contract but suggested they will not pay above and beyond to keep hold of him.

France international Umtiti is in the second year of a five-year deal but his relatively low release clause of €60 million has led to fears he could leave Camp Nou this summer.

Manchester United are among the clubs reported to be prepared to pay the centre-back’s buyout fee.

Umtiti, 24, has remained relatively quiet over his future, refusing to answer a question about United in an appearance on French television last month.

However, he responded to the speculation which followed that interview by kissing the Barca badge when celebrating a goal against Roma.

Diario Sport report that negotiations over new terms and an increased release clause have slowed because the player’s agent — who is also his brother — is demanding a wage which would place Umtiti in the second tier of earners at the club, along with Sergio Busquets and Gerard Pique.

Bartomeu did not confirm that but did say that Barca must be careful not to break their wage structure when dealing with new contracts.

“Umtiti is very important, he knows that, the fans know that,” the president told Cadena Ser. “He’s only in the second year of his contract but our desire is for him to renew his deal.

“But, as directors, we have to make sure [players’ wages] are within the salary structure to remain a competitive and sustainable club.”

Umtiti has been a regular since joining from Lyon for €25m in 2016. Despite missing part of the current campaign with a hamstring problem, he has made 38 appearances in all competitions this season alongside Pique in the middle of Barca’s back four.

Meanwhile, Bartomeu also denied that coach Ernesto Valverde’s job would have been on the line if the Catalan side had failed to beat Sevilla in the Copa del Rey final.

Barca are unbeaten in La Liga this season and need just one point from Sunday’s trip to Deportivo La Coruna to wrap up the title and complete a second double in three years.

Mundo Deportivo reported before last Saturday’s cup final that some members of the board would have pushed for a managerial change if Barca lost.

Barca went on to beat Sevilla 5-0, producing one of their most emphatic performances of the season, but Bartomeu insists Valverde’s position was never under threat regardless of the result.

“It’s false that Valverde’s job was ever in danger,” he said. “No one on the board has ever doubted him. Everyone felt bad after Roma, Ernesto especially, but no one had any doubts. It’s simply not true.”

The shock defeat to Roma in Europe has overshadowed what has largely been an excellent campaign for Barca in terms of results.

As well as winning the Copa del Rey for a fourth consecutive season, they recently broke the record for the longest-ever unbeaten run in Spain’s top flight and could yet become the first-ever side to go an entire La Liga campaign unbeaten.

“We value everything,” Bartomeu said when asked if Valverde’s domestic success was less impressive given Barca’s failings in Europe for a third consecutive season. “We value the Copa del Rey, above all because of how we won it this year. And we’re one point away from winning the league. It’s a dream to win the double after how the season started.

“Valverde has been very important in [the success]. He has transformed the team. Neymar’s exit was a big moment and we had to come through that pain. And Roma was a blow because we are ambitious and wanted to win all three trophies. We were close. It wasn’t to be in Rome but the team has responded.

“We like Ernesto because he’s an intelligent guy, he manages the team well and he reads games brilliantly. There’s a good atmosphere in the dressing room and I have complete confidence in him.”