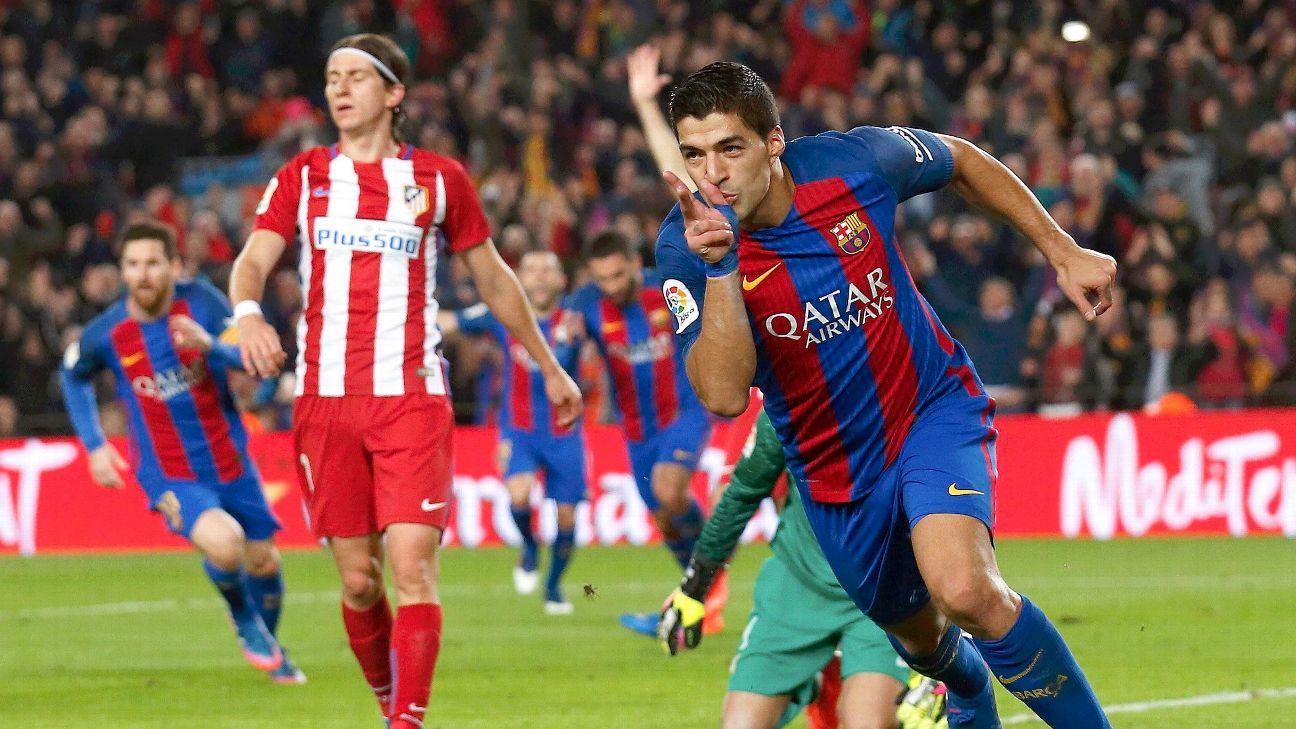 
If a television documentary crew was given unfettered access to Diego Simeone’s house, it would be no shock to find he had a little wax effigy of Lionel Messi with big needles sticking out of it. Of course nothing drives this elemental competitor to distraction more than those two Champions League final defeats to Real Madrid in Lisbon and Milan, but if anything comes close, it’s the hex that Messi and Barcelona hold over him in La Liga and the Copa del Rey.

Notwithstanding twice knocking them out of Europe, Simeone hasn’t won at home against Barca since signing for Atletico, and Los Rojiblancos haven’t tasted league victory against the Catalans in Spain’s capital for nearly 10 years. By their brutally competitive standards, it’s a shameful record.

Since a team spearheaded by the man who’s now Manchester City’s all-time leading goal scorer (Sergio Aguero) and protected by Manchester United’s most important footballer (David De Gea) won 2-1 against a Pep Guardiola XI, Atleti have never earned a cigar against Barca. Close, but never lighting the stogie up.

They’ve flopped at home to Guardiola, Tito Vilanova, Tata Martino, Luis Enrique and Ernesto Valverde, and the most galling element is that on eight occasions they’ve been pipped by a single goal (1-2 six times). During that spell, it’s Messi who’s most often risen to the occasion — six goals and one assist across those eight single-goal Barcelona wins.

And if you’re one of those who actually expect another guaranteed away win for the Spanish champions (I’ll have a glass of whatever it is you’re drinking, by the way), then that’s the formula for which you’ll be praying. The big performance.

The last remaining vestige of the golden era, when Barcelona’s elongated run of imperious success at Atleti’s home began, is the way in which their talented players dig deep to produce a barnstorming, focussed, aggressive performance when it really counts.

Talent is a given. Even in the eras within living memory when Barcelona were in “crisis” and failing to win trophies, there was talent oozing from every dressing room locker at the Camp Nou.

What has ebbed away, match by match, board decision by board decision, and what has been masked by Messi’s all-time brilliance, is Barcelona’s ability to control matches.

Atleti can look towards this contest — one in which victory could put them top and help leave the leaders down in fourth if Alaves and Sevilla both win — with optimism because of the chronic disorder that has plagued Barcelona’s worst performances this season.

Two of them came in the past fortnight: the off-the-ropes win at Rayo Vallecano, having been out-footballed for at least an hour, and then the tactically abysmal home defeat to Real Betis.

Study the high points of Barcelona’s wins against Tottenham, Sevilla, PSV, Inter and Real Madrid this season, and only a fool would deny that, on form, they can look like Europe’s most dangerous and irresistible side. Study most of the rest of the matches and only the most one-eyed Barcelona fanatic could ignore the vast lagoons of space between their defence and midfield, the rag-tag-and-bobtail gaps horizontally between midfielders, the lack of ability to turn and run back if the opposition sprint or pass past them.

Please take note that in 2009-10 and 2010-11, when Guardiola’s team was at their peak, they won the title conceding 24 and 21 goals respectively. Even in Luis Enrique’s 2015 Treble-winning triumph for a much more open, much less controlling side, the goals-against column read 21 again. This term, already, they’ve conceded 18. It’s another shocking stat.

Effectively, Barca play Jake LaMotta football now. Assault them with blows and you can put them on the ropes — dizzy, dopey, vulnerable, looking like a sitting duck. Let them assault you with blows, and the picture is startlingly different — flurries of clever, punishing jabs bring the crowd to their feet, the eulogies to our lips and the prospect of this being a triumphant season from the unimaginable to the feasible.

It’s a team of extremes: vulnerable and vindictive in nearly equal measure.

But given Atleti are the rivals on Saturday, the current state of affairs in the club that has dominated Spain for nearly 15 years is particularly pungent.

While Sergio Busquets — who’s still only 30 — is as intelligent, as technically exquisite, as capable of making ridiculously complicated parts of football look simple, its crystal clear that the playing style that Barcelona have been trying on, like an ill-fitting sport coat, does not suit him in any way whatsoever. Never Olympic fast, neither his ability nor his enthusiasm to doggedly run because his team is being dragged around like a discarded plastic bag on a windy day are on the increase.

Once he had arch disciples next to him: Xavi and Andres Iniesta in their prime.

Once the team around him pressed, they won the ball back quickly. The concept was that Barca’s front six, perhaps even their front six and their two full-backs, passionately believed in the superiority of regularly sprinting just five or six metres to press rather than having to regroup by running 20 metres to get men behind the ball — or worse still, chase the ball as it disappears towards Marc-Andre ter Stegen’s goal.

These days, Busquets can look like a beautiful ballroom dancer gamely executing his divine, elegant twirls and sweeps at a full-on rave where everyone is leaping around with little thought to energy, order or anything except how to keep in time with the flashing lights and the 150 beats per minute.

Thus, when it comes to Rodri Hernandez, it’s absolutely unavoidable to congratulate Atleti’s transfer team and snort in derision at Barca’s scouting and planning.

On Saturday, Busquets will face this 21-year-old who can become his nemesis, but had the Catalans been in any way clear about signing for football worth instead of whim and availability, could have been Robin to his Batman for several seasons to come. How Rodri and Busquets fight for territory, use the sweetmeats of quality possession and dictate both the direction and tempo of this crucial match will be a joy all on its own.

Rodri, signed up from Villarreal very early last season on a deal that wasn’t enacted until last summer, isn’t a Busquets clone. Nobody in European football quite resembles the Catalan’s wits and wisdom on the ball in central organising midfield, but this kid comes close. His repertoire is bulging with gifts: recuperation of the ball, athleticism, street smarts, reliability, accuracy, power, height, an innate knowledge of match tempo.

As far as the balance of power in La Liga goes, it’s a good thing that Barcelona’s transfer gurus were asleep at the wheel when it became obvious that the right price could prise this kid away from Villarreal. At an eventual cost of only €25 million, if this kid reaches his full potential, the price will be one of the great modern investments. If Madrid, Barcelona or even Manchester City come calling covetously to try and enlist him, he’ll cost them five times what Atleti paid.

Is this the weekend when the youngster’s coronation is completed by a crowning performance against the player he most resembles?

Barcelona will be without Ivan Rakitic, it’s a doubt that Philippe Coutinho is ready in time, Messi is short of match fitness since his arm fracture and Ter Stegen spent the international break with club physios trying to eradicate pain in his back following that remarkable soft-hands error that cost what became Betis’ winning goal at Camp Nou.

Rodri won’t win this match on his own, but how he copes in the battle of wits, territory and possession against Busquets, will go a long way to determining two things. First, whether Atleti’s horrible, decade-long drought without a home Liga win over Barcelona is about to end. And second, whether Simeone can forget about that little waxwork doll of Messi and store the needles back in the sewing kit.

This promises to be a catalytic weekend at the Metropolitano.