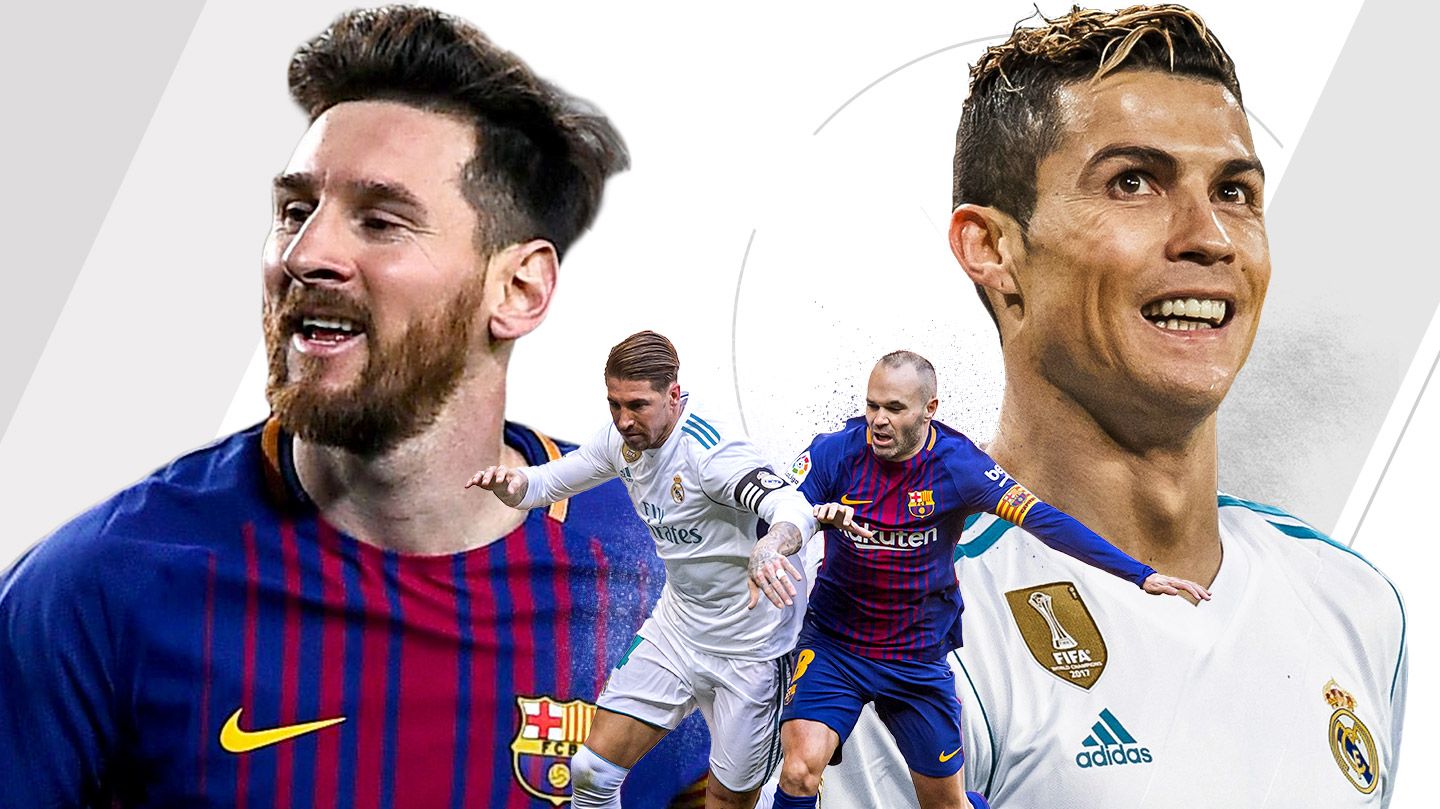 
Sunday sees Barcelona and Real Madrid meet in El Clasico. With Barca having already clinched the Liga title and Madrid preparing for the Champions League final, there is little riding on the match itself.

However, it remains club football’s biggest game; we asked our writers to look at the topics and themes being discussed ahead of this latest showdown.

“Nothing’s better than a double,” boasted the front cover of Barcelona-based newspaper Diario Sport on Monday. Well, a treble would be, as would a double that included an unbeaten league season. You can’t help but feel that even the editors weren’t totally convinced by their headline, which might as well have read: “Not even Real Madrid’s third consecutive Champions League trophy can top this.” But maybe it could, and as the posturing gets underway, Barca need to avoid defeat against Madrid and finish the campaign unbeaten — something not done in Spain’s top flight since 1932 when Madrid managed it in an 18-game season — to strengthen their argument. — Sam Marsden

While Barca have imposed their seven Liga titles in 10 years on Real Madrid, there has been another, more barren, run. Did you know that the Catalans have only won three of the last 11 Camp Nou Clasicos in all competitions? It’s a truly extraordinary sequence, still more if you consider that Lionel Messi, Andres Iniesta, Sergio Busquets, Gerard Pique & Co. have enjoyed such powerful domestic superiority.

What’s more remarkable is that Madrid, so good at the Camp Nou in recent times, have only won two of their last 10 at home vs. Barca, conceding 28 goals in the process. Prediction? That the pattern changes on Sunday. Home win! — Graham Hunter

With 32 goals in La Liga this season, Messi has all but wrapped up a fifth career Pichichi as the league’s top scorer. Ronaldo, meanwhile, is well back on 24; 16 have come in his last eight games, but a slow start and being rested for four of Madrid’s last five away trips have put paid to the 33-year-old’s chances of adding to the three times he has won the award.

Messi is the Clasico‘s all-time leading scorer; the penalty he netted in December’s clash at the Bernabeu was his 25th goal in 37 games vs. Madrid. Ronaldo has 17 in 29 vs. Madrid and the last five he has managed in La Liga were scored at the Camp Nou. — Dermot Corrigan

To pasillo or not to pasillo?

“You’re driving me mad with all this pasillo stuff,” said Ernesto Valverde, but that didn’t stop them. Nor did Zidane saying: “We’re not doing it, end of story.”

Tradition says that a team that has just won a title gets a pasillo (a guard of honour) from their opponents as they run onto the pitch for their next game. Barcelona won the league last week; this week, their opponents are Real Madrid. And they refused. Valverde understood why. The problem, he said, is that rather than become a homage, it has become a humiliation. The last time it happened, it certainly was.

Back in 2009, Barcelona applauded Madrid onto the pitch. On the morning of the game, Marca’s front page gleefully depicted the Bernabeu pitch with red dots showing the visitors where to stand beneath the headline: “Barça, it’s just here.” Marca gave away posters of Barcelona’s humiliation. Some Madrid fans wore T-shirts declaring: “I saw the pasillo” and there were even supporters who turned up, watched the guard of honour and left. They missed a 4-1 win. — Sid Lowe

The man with the whistle isn’t too worried

“The Clasico is easy,” says Eduardo Iturralde Gonzalez, the man who refereed more first-division games than anyone else.

Say what?! The biggest game on the planet is easy? The game where every decision is dissected, analysed and then interpreted through the prism of their bias to demonstrate your “bias?” The game with everything riding on it, where every mistake is not a mistake but a conspiracy and half the country will be out to get you?

“It’s true,” he says. “They’re games where there are relatively few fouls and, especially, not many offsides. Watch closely on Sunday: I think you’ll see that there won’t be many. It’s curious, I don’t know why it happens — someone should study it — but there are hardly any.”

Iturralde was in charge when Barcelona beat Madrid 5-0 in 2010, having previously taken charge of two 3-0 wins for Barcelona, including the day that Ronaldinho got a standing ovation from the Bernabeu. Jose Mourinho pointed that out the day before, of course. That night, Barcelona took Madrid apart. “Iker Casillas, who I got on well with, said to me ‘bloody hell, Itu, I like you, but don’t referee us any more.’

“The stats say I’ve been good for Barcelona, but the stats are fine to read, nothing else. It’s true that in a Clasico, there’s much more media attention, but that didn’t really bother me much. In the end, you get used to the insults. It’s more or less normal. What does sit badly is when they question your honesty, when they say you blow [the whistle] the way you do because you want benefit a certain team.”

“The Clasico is rarely so bad. And this time, with Barcelona having owned the league and Madrid focused more on the Champions League final, a game with few fouls, few offsides, and no points really in play, it’s the kind of game that any referee would like. No pressure, no tension, just enjoy it.” — Sid Lowe

Friends across the lines

The “decaf” nature of Sunday’s game may emphasise the many friendships that span across the two squads. Tensions having lowered considerably from Jose Mourinho’s tempestuous spell as Madrid manager, while the teams feature teammates from six World Cup-bound countries: Spain, Brazil, Germany, France, Croatia and Portugal.

Even longtime rivals Sergio Ramos and Gerard Pique have settled their differences, with both members of a “cross-Clasico” WhatsApp group and going into business together off the pitch. — Dermot Corrigan

During 2010-11, the rivalry hit its bitterest level in living memory and Spain coach Vicente Del Bosque warned that any player, who carried the ill feeling over to national-team duty, would be dumped. Such was the antipathy that Casillas, Carles Puyol and Xavi called a summit to end the snarling. So for those who desire the 2010 World Cup winners to achieve similar in Russia, there must have been trepidation when Pique recently admitted there is a WhatsApp group, featuring Madrid’s Spanish contingent, in which he has gleefully provoked and teased them this season.

But as long as there’s no ultraproblematic incident Sunday, that’s apparently not a big deal. According to Pique: “I can joke around with those guys, because they are my brothers on the Spanish national team. We might hate each other’s clubs, but we are all playing for the same country, with the same dream, and that’s something that I’m very proud of.” — Graham Hunter

The current climate is a far cry from 2011, when four games in 18 days tipped Jose Mourinho and Pep Guardiola over the edge. Mourinho kept prodding, accusing Guardiola of criticising referees, and the Barca coach finally bit back. In a tirade that drew applause from his players when he returned to the room where they were eating, Guardiola called Mourinho “the f—ing man” in news conferences but promised his side would do the business on the pitch.

Seven years later, the media adds fire to the Clasico, but the coaches, Barcelona’s Ernesto Valverde and Zinedine Zidane of Real Madrid, could hardly be more placid. Neither loses his temper in the press room nor rises to provocative questions about the other side. — Sam Marsden

It’s early 2003 and Barcelona learn that Sporting Lisbon need to sell. There are two big targets: A 19-year-old, right-footed left winger called Ricardo Quaresma and a right-footed right winger, who just turned 18, by the name of Cristiano Ronaldo. Barca are in a trough; Luis Figo, himself originally recruited from Sporting, hasn’t been properly replaced since jumping ship for Madrid. The scouts do their work, Quaresma is signed and he lasts one season at the Camp Nou. The other kid? Well, you know.

Five years later, when Sir Alex Ferguson blocked Ronaldo moving to Madrid, Pep Guardiola was taking over at Barcelona. Club executives went to the Portuguese superstar and promised to pay the same transfer free and wages their rivals were offering. They even teased Madrid president Ramon Calderon about doing so. But Ronaldo had his dream and politely declined. Imagine him and Lionel Messi together. Frightening. — Graham Hunter

Zinedine Zidane has said Real Madrid will not give Barcelona a pasillo guard of honour for winning La Liga, but the editor of Madrid-based newspaper Diario AS, Alfredo Relano, says both teams should award one to Andres Iniesta. The midfielder is a rare species: someone who transcends the Clasico rivalry.

As part of a select group that includes Ronaldinho, Johan Cruyff and Diego Maradona, he’s one of just four Barca players to be given an ovation by Madrid supporters, and on Sunday, he makes his 38th and final appearance in this game. Iniesta will hope to go out with his 17th win, while a fourth goal would be the cherry on the goodbye cake. — Sam Marsden

Last Clasico for some Madrid stalwarts?

Madrid’s squad had been remarkably stable in recent years; each member of Zidane’s likely XI on Sunday has been at the club for at least three seasons. But that could change in the summer, with once-untouchable Karim Benzema and Gareth Bale having lost their galactico status. Should neither man start, they can’t really complain: Benzema has nine goals in 30 Clasicos, while Bale has scored just once (the 2014 Copa del Rey final winner) in nine games against Barca.

If Madrid president Florentino Perez is planning a big shake-up, this might also be a final Clasico for goalkeeper Keylor Navas and, perhaps, midfielders Isco and Mateo Kovacic. Meanwhile, though Ronaldo’s complex contract and tax situations are unresolved, he will surely remain at the club. — Dermot Corrigan

History, tradition and continuity looks over Barcelona players before every game, a physical reminder that this goes back a long time, that others were there before them. Along orange corridors and into the home dressing room at the Camp Nou, players’ names are written on the front of simple red lockers, the lists growing over the years.

Every time Gerard Pique gets changed, for example, a quick glance reminds him of the men who changed there before him, whether good, bad or indifferent: Santiago Ezquerro, Javier Saviola, Guardiola, Steve Archibald, Diego Maradona. Neymar followed Ronaldo into his. Some “decorate” them, there are quotes and pictures. Corinthians 9:24, for example. “Do you not know that in a race all the runners run, but only one gets the prize? Run in such a way as to get the prize.” — Sid Lowe