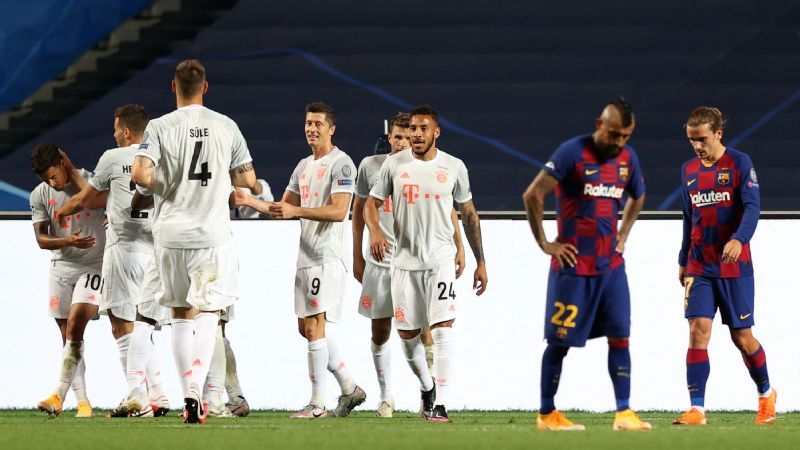 
Bayern Munich totally embarrassed Barcelona in a 8-2 Champions League win on Friday night to book a spot in the semifinals of the tournament in Lisbon.

The loss was Barcelona’s worst-ever in the Champions League, while Bayern became the first team to score eight goals in a UCL knockout-round game.

The match got off to a cracking start with Thomas Muller putting Bayern ahead early and David Alaba conceding an own goal to Barcelona minutes later to put the scoreline at 1-1 inside of the opening 10 minutes.

Bayern then went back in front just past the 20-minute mark when Ivan Perisic picked up a pass from Serge Gnabry and fired past Marc-Andre ter Stegen with a shot that took a slight deflection and wound up in the roof of the net.

It was 4-1 in Bayern’s favour soon after as a rapid-fire few minutes saw Muller set up Gnabry with a lovely first-time pass for a goal before notching his second of the match at the near post from a Joshua Kimmich assist.

The German champions took the three-goal lead into the dressing room, with Barcelona reeling after an opening 45 minutes that saw them concede four in the opening half of a UCL knockout-round game for the first time in club history.

Luis Suarez looked to have given Barca a lifeline in the second half with and early goal, but Bayern hit right back when Alphonso Davies tip-toed down the endline and cut a pass back to Kimmich for an easy first time finish to make it 5-2.

Bayern continued to pile on, this time through Robert Lewandowski, who headed home a cross from Barcelona loanee Philippe Coutinho.

The Brazil international then scored a goal of his own minutes later and added a second before full-time to complete the Bundesliga champions’ 8-2 thrashing of Barcelona.

Hansi Flick’s side, the first to ever score eight goals in a Champions League game, now await the winner of Saturday’s match between Manchester City and Lyon to see who they’ll face in the semifinals on Wednesday, Aug. 19.