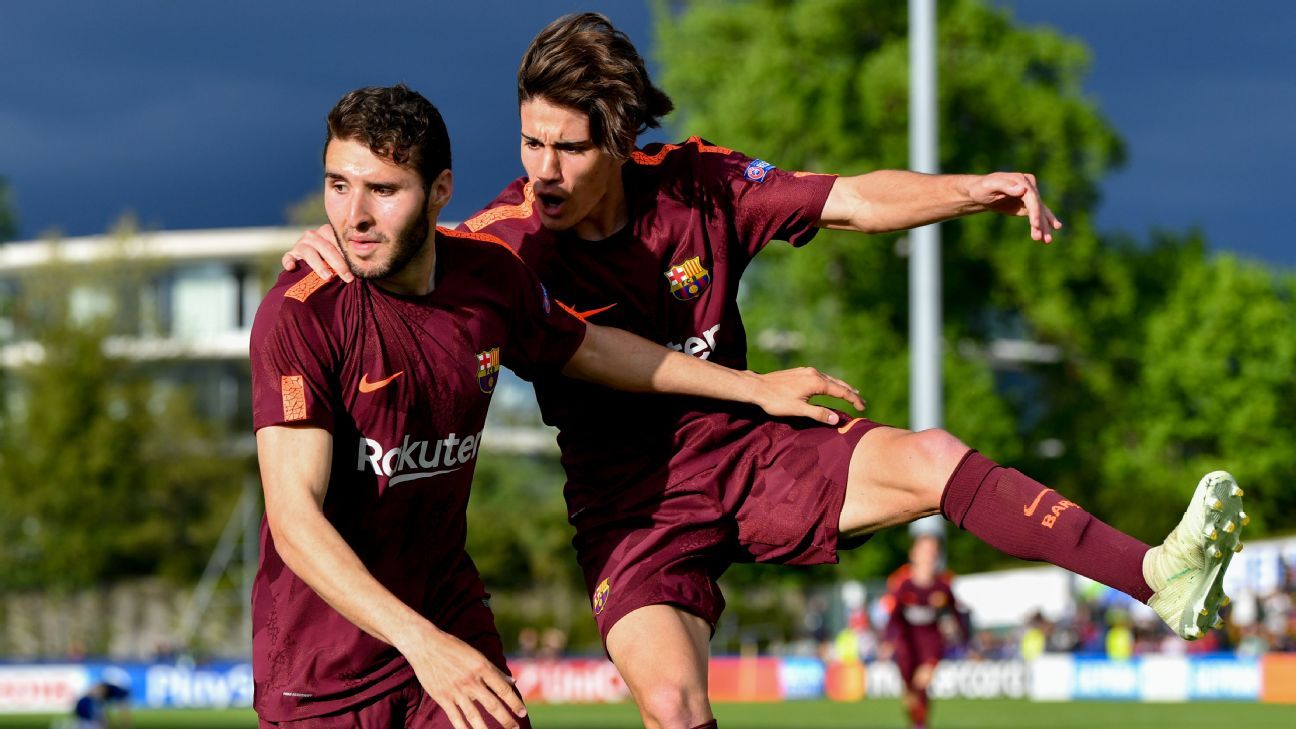 
BARCELONA — On Tuesday, Barcelona’s victorious under-19 team returned from Nyon. At the airport, a worker greeted them with a rendition of “Championes, Championes” and then belted out the club’s anthem.

For the second time in the tournament’s five-year existence, Barca won the UEFA Youth League, beating Chelsea 3-0 on Monday. They had beaten another English side, Manchester City, in a nine-goal thriller on Friday to make the final, before an Alejandro Marques brace and a late Abel Ruiz effort propelled them to the trophy over the Blues.

The Catalan press, often gloomy about La Masia in recent years, have used it as vindication of the club’s academy at a time when some of their most talented youngsters — Jordi Mboula (Monaco), Sergio Gomez (Borussia Dortmund), Eric Garcia (Manchester City) — have left in the belief their development is better served elsewhere.

Meanwhile, players have been sourced from outside the club, such as Arsenal’s Marcus McGuane and Montreal Impact’s Ballou Tabla, to help the B team in their battle to stay in the second tier of Spanish football. Though many would have preferred the club to look within.

That argument will be strengthened following the success of the U-19s, led by highly-rated coach Garcia Pimienta. A candidate to take over from Gerard Lopez (if he’s pushed) as B team manager with survival in the second tier of Spanish football at stake, Pimienta knows the club’s academy like few others, plays the style Barca demand and has consistently got the best out of players at all age levels.

Venezuelan forward Marques was the star of the Youth League triumph, with goals in each round from the quarterfinal on, including two in the final. Midfielder Alex Collado has also had a stunning season and Jandro Orellana is another one making waves for club and country, but here are five players Barca may have the biggest hopes for.

Perhaps the most talked about player coming through Barca’s academy at the moment, Ruiz isn’t actually a regular with the U-19 team. Instead, he’s already playing week in, week out for Gerard’s B team. However, he travelled to Nyon this week to boost Barca’s chances of winning the cup.

Already a star for Spain at various youth levels, Ruiz is a traditional No. 9, although he occasionally plays wide for the B team. Stronger than your average 18-year-old, he moves well, links play and scores goals (including a penalty for the first team in the recent Catalan Super Cup final). Amid interest from elsewhere, Barca expect to tie him down to a new contract this month.

While it’s impossible for the fans to get close to Lionel Messi and Co, access to Barca’s B team players is simpler. After each home game, around 100 young supporters wait by the players’ exit at the Mini Estadi and grab selfies with their favourites. One of the players in demand after a recent home match was Riqui Puig. The 18-year-old has broken into the B team in recent months and has even trained with the first-team, but he barely looked older than some of the youthful fans asking for his autograph before he left with his mum.

Puig is a midfield player who used to operate as a No. 10 but has now dropped deeper. Given his size, he may have been let go by some clubs but not Barca. He ran the game against Chelsea and is now getting plenty of time on the ball against men twice his size and his age. And he doesn’t look intimidated.

The goal scorers and the midfield technicians will always get the headlines at Barca, but the Catalan club see in Pena a potential long-term successor to Marc-Andre ter Stegen in goal. They recently renewed the 19-year-old’s deal and he should take over goalkeeping duties with the B team next season.

Barca fought off interest from Bayern Munich to keep hold of Morey last summer. With Sergi Palencia’s progress stalling, there’s no reason the attacking right-back can’t break into the B team next season. Still 18, he’s been one of the standout players for the U-19s this season after progressing through the academy.

Not the size of an average Barca full-back of recent years, Miranda is perhaps more Filipe Luis than Jordi Alba in stature. But he’s brilliant nevertheless — for Barcelona and for Spain. The 18-year-old was one of his country’s stars (along with Ruiz and Morey) as La Roja reached the Under-17 World Cup final earlier this year, losing to England. He can also play further forward and is a real danger in the final third thanks to the quality of his deliveries.