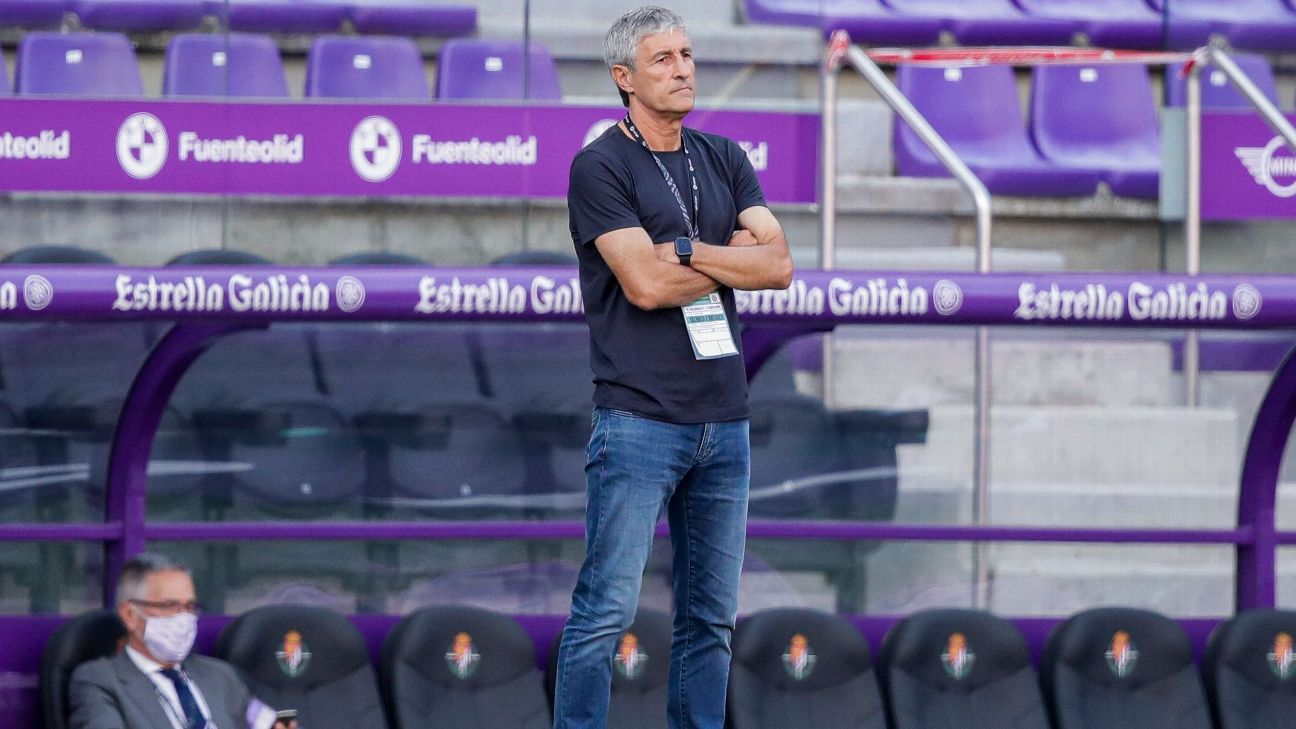 
Barcelona president Josep Maria Bartomeu held crisis talks with coach Quique Setien on Friday with the team in a delicate situation after losing La Liga to Real Madrid, sources have confirmed to ESPN.

Bartomeu wanted to assess the coach’s state of mind and if Setien feels strong enough to lead Barcelona through the crisis. Sources told ESPN that Setien will manage the team on Sunday in the last game of La Liga season against Alaves and Bartomeu’s idea is for him to still be in charge in Aug. 8, when they play against Napoli in the second leg of the Champions League round of 16.

Barca captain Lionel Messi‘s critical remarks, branding the club “inconsistent” and “weak” while stating the need to “change a lot” following Thursday’s 2-1 home defeat to Osasuna, looked to be directed at Setien.

According to sources, Bartomeu is aware of the tense relationship between the players and Setien but he hopes that the five days off the team will have next week after La Liga is over, will help to decompress the situation.

Thursday’s shock result allowed Madrid to clinch their 34th league crown with a game to spare, with Barca settling for second place. The Catalan giants could still avoid a first trophy-less season since 2007-08 with success in the Champions League when the competition resumes next month.

Reports that Barca could promote reserves coach Francesc Xavier Garcia Pimienta in place of Setien is unlikely as he is “not the profile they are looking for,” according to club sources.

Setien said after Thursday’s defeat that he is “hopeful” of guiding Barca in next month’s Champions League but admitted he “doesn’t know” if he will still be in charge by then.

Asked if he believed he will be coaching Barca against Napoli, Setien told reporters: “I hope so but I don’t know. I agree with him [Messi] with respect to a few things.

“We have to be self-critical. I feel capable [of turning things around] but the self-criticism has to be carried out by everyone.

“We will have time to rest and the team will arrive fresh to face the competition with optimism. I’m sure we will be a different team. We will face this competition [Champions League] with the maximum guarantees.”

The same sources admit that while Setien has a “very good knowledge of football,” they recognise the coach has made “mistakes” in managing the return of Luis Suarez to the team from injury and benching Antoine Griezmann in several games.

Luis Suarez speaks about Lionel Messi’s future at Barcelona and debates whether he’ll seek a change.

Sources from the Barca changing room claim the job is “too big” for Setien and that when he “tried to impose something, it was too late. At times it feels like he wants to be sacked.”

Bartomeu does not like to make rushed decisions and his move to sack Ernesto Valverde in January following defeat to Atletico Madrid in the Spanish Super Cup semifinal was not liked by the team, including Messi.

He accepted responsibility for Thursday’s loss.

“I’m the coach and the one who is responsible [for the defeat],” he said. “But we took 10 corner kicks and had we scored one of them, we would not have lost the game. We have to be demanding and there are things to improve. Many things are going to be tough, including the Champions [League], but we have improved on many other things.”

“You can’t burn everything, we’ve done some good things,” Setien said. “It was just not to be and this is part of sport.”

Setien’s appointment in January following Valverde’s sacking had already taken fans by surprise considering the Spaniard’s biggest career achievement was guiding Betis to a sixth-placed finish in the 2017-18 campaign.

Bartomeu handed Setien a vote of confidence earlier this week when he said he expected the coach “to continue in charge next season.”