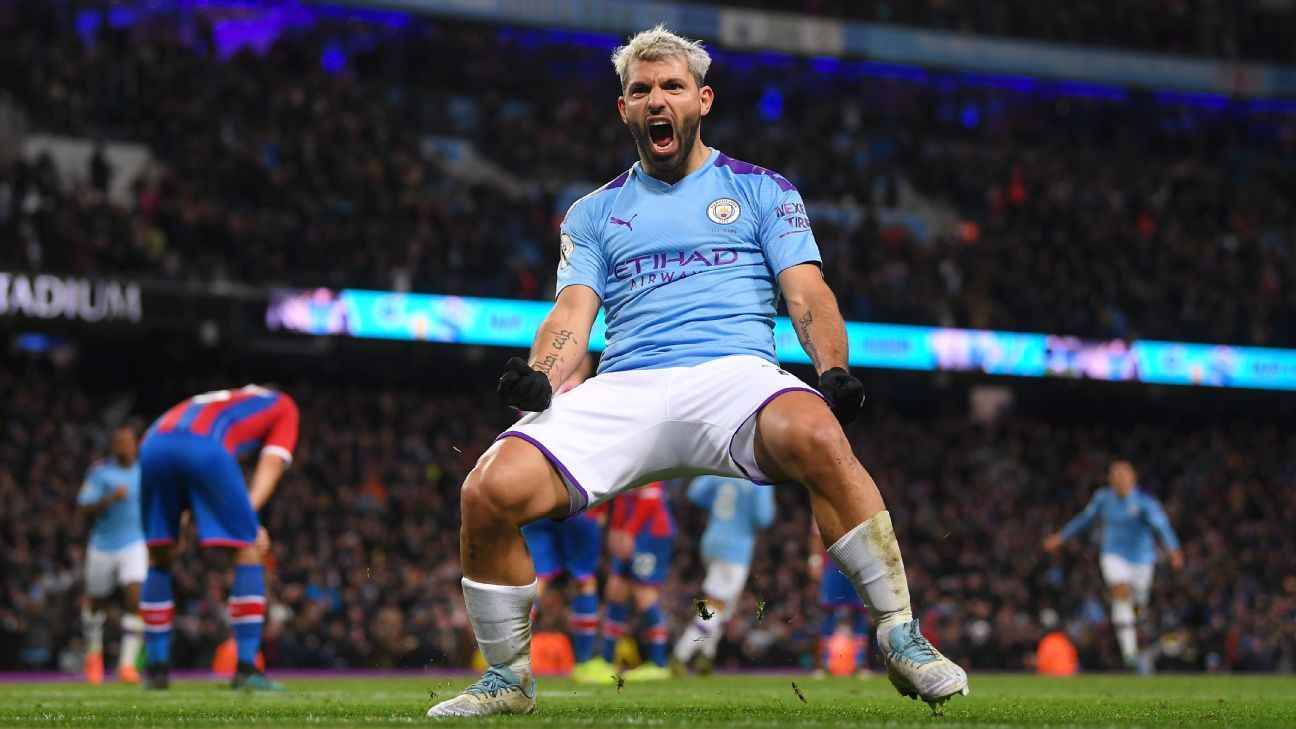 
The transfer window opened in early January, and speculation is heating up about potential deals. Check out the latest gossip below, and see all official deals here.

Manchester City striker Sergio Aguero is on the radar of Barcelona when he becomes a free agent next summer, according to The Sun.

Aguero, 32, is in the last six months of his contract at City and is yet to agree a new deal, which means he is free to talk to clubs outside of England.

Though his season has been ravaged by injury, he is still one of the best strikers around, and Barcelona may be looking for a short-term replacement for Lionel Messi if the Argentina international follows through on his threat to leave Camp Nou when his own contract expires in 2021.

Aguero’s £240k-a-week wages could be a stumbling block, while PSG have also shown interest. The striker has always said he wants to return to Argentine club Independiente to end his career but he may have a few years left at the top in Europe yet.

14.20 GMT: Manchester City have reportedly accepted a €5m bid from Barcelona for Eric Garcia, which would see him move in January, says Mundo Deportivo.

Garcia, 20, said he wouldn’t sign a new contract at City and the defender’s current deal expires in the summer of 2021.

City held out for around €20m in the summer, but the two clubs couldn’t come to an agreement and the asking price has now been significantly reduced given the Spaniard can move for free in six months’ time.

Other top clubs were interested, but Garcia always wanted to return to his former club Barcelona, with City set to receive another possible €5m in add-ons. The deal just needs to be signed off by the new president after Jan. 24 — or all the candidates have to agree the signing can be made given the exceptional circumstances…

Jose Mourinho has a go at Arsenal’s Mesut Ozil after he said he would rather retire than sign with Tottenham.

13.26 GMT: Sky Sports says that Nice could be set to loan another Premier League player — having already snapped up William Saliba from Arsenal.

The report reads: “Jesse Lingard‘s representatives have held initial discussions with Nice over a loan move. An official approach is expected in the next week. Manchester United have yet to decide whether to allow Lingard to leave in this transfer window.”

13.14 GMT: Bournemouth could be set to sign Jack Wilshere.

Wilshere, 29, has been training with the club since he was released by West Ham over the summer as the former Arsenal midfielder spent a loan spell on the south coast in 2016-17.

“He’s really enjoying his time here so we will have to maybe have a discussion in the next week or so,” Bournemouth manager Jason Tindall said. “Whenever you have a player of Jack’s quality training with you, it would be foolish to say there is not a chance of wanting to do something.”

12.52 GMT: Borussia Dortmund are drawing up a list of possible replacements for winger Jadon Sancho, if he leaves the club in the coming months.

Sancho has been repeatedly linked with a €120m move to Man United and Dortmund are eyeing VfB Stuttgart’s Tanguy Coulibaly, according to France Football.

Coulibaly, 19, only joined Stuttgart from PSG on a free in 2019 and has two goals in 14 Bundesliga appearances for the club.

12.15 GMT: Moussa Dembele is signing for Atletico Madrid on loan from Lyon and the French club have found their replacement.

Fabrizio Romano reports that Leicester striker Islam Slimani has just completed his medical and will be announced soon.

Since he bought the French club in the summer of 2011, Sheikh Tamim bin Hamad al-Thani has always had a dream: bringing either Cristiano Ronaldo or Messi to the Parc des Princes. He tried many times, but it never materialized. However, he knows that this time, Messi’s mind is very much open and the desire and determination to put a plan together to try to bring him to Paris is very much there.

Messi stands above Pele, Ronaldo as all-time top one-club goal scorer The Barcelona captain has not yet decided what he’ll do in the summer. He will be able to leave Camp Nou for nothing unlike last summer, when he tried to force a move out despite still being under contract. This time, it will be different.

Will he really end his 20-year love story with the city and the club that gave him everything? Some believe that because of the chaos at the club over the past few years, the run of bad results and the lack of direction, he will definitely want to leave. Others trust that deep inside, he only wants to stay and finish his incredible career in Barcelona and if he is convinced that the conditions are there (new president, better team, Xavi involved in some capacity…) for more success, he would stay.

But if Messi does leave, can PSG really recruit him this summer? Of course. Is it likely or realistic? That’s uncertain. The priority in Paris is to extend the deals of Neymar and Kylian Mbappé. They both expire in June 2022, and new long-term contracts for both forwards would mean continuing to build a very competitive team around them, as well as securing their values in the event they want to leave in the future.

10.59 GMT: Ole Gunnar Solskjaer said Paul Pogba is “at his best” after the midfielder’s goal against Burnley sent Manchester United top of the Premier League.

The Frenchman scored with a sublime volley to earn United a 1-0 win at Turf Moor and ensure Solskjaer’s team head into Sunday’s crucial clash with champions Liverpool three points clear at the summit.

“I’ve always said Paul is a big player for us,” said Solskjaer. “He is a good character in the dressing room, he is always the one the lads look to and he’s a world champion of course, and I think he’s at his best at the moment.”

It is the first time United have topped the Premier League in January since 2013, when Sir Alex Ferguson’s team went on to win the title and victory at Burnley sets up a mouth-watering trip to Anfield on Sunday.

10.22 GMT: Erling Haaland can have his pick of clubs when he wants to leave Borussia Dortmund, but where should he go?

Kasey Keller and Steve Cherundolo agree the list of strikers ahead of Erling Haaland is shrinking quickly.

Diaz, 21, joined the Rossoneri on a season-long loan from Real Madrid in the summer and has scored four goals and set up three more in 22 appearances in all competitions since.

Having managed only 21 appearances, six as a starter, for Real Madrid since signing for the club from Manchester City in January 2019 for a fee of over £15m, Diaz is reportedly open to continue at Milan beyond this summer.

Los Blancos have no intention of letting Diaz leave permanently, but are open to extending his loan stay at the San Siro for a further season.

09.09 GMT: Luka Jovic‘s loan move from Real Madrid to Eintracht Frankfurt is set to be made official today.

Eintracht Frankfurt sporting director Fredi Bobic has confirmed that his club is on the verge of signing Jovic on loan for the remainder of the season.

“Luka Jovic is on the verge of joining our club until the summer,” Bobic said. “There are still a few details to be sorted out, including the medical. But if all goes well, he will soon be with us.”

The Serbia international will return to the Bundesliga club on a six-month loan with no purchase option included in the deal. Jovic, who signed a six-year contract with Madrid after moving to the Spanish giants on a reported €60m deal in the summer of 2019, has had limited playing time with Los Blancos.

The 23-year-old has scored two goals in five appearances in all competitions for Madrid this season. He has not travelled with the team to Malaga for Thursday’s Spanish Supercopa semi-final against Athletic Bilbao, having previously missed Madrid’s goalless draw at Osasuna on Saturday.

Jovic impressed at Eintracht scoring 27 goals during the 2018-19 campaign that led to Madrid acquiring him that summer.

08.30 GMT: The Bundesliga’s English contingent could increase this summer, with Bayern Munich linked with a move for Reading defender Omar Richards. The 22-year-old is out of contract in the summer and, according to the Guardian, he will agree three-year deal with the German and European champions. The former England Under-21 international will provide competition for first-choice left-back Alphonso Davies. Ex-Chelsea midfielder Jamal Musiala is also at Bayern.

Kasey Keller questions if Bayern’s defence is suited to playing a high line after giving up 24 goals in 15 games.

The youngster did sign a new contract that is set to keep him at Stamford Bridge until 2024, but the report indicates Bayern haven’t been thrown off the scent and are monitoring how much game time he’s getting under Frank Lampard this season.

Last summer Chelsea rejected a loan offer-plus-£70 million purchase option from the German champions, which provides an idea of how much Bayern will have to pay to secure his signature.

The Guardian is reporting that Arsenal are hoping to make an offer for Shakhtar Donetsk‘s Manor Solomon this summer.

The Gunners have already made a few moves during the January transfer window with the belief being that manager Mikel Arteta will be making wholesale changes over the course of the next few windows.

After a handful of strong performances in the UEFA Champions League, Solomon has emerged as one of the main men that Arsenal are monitoring.

Wolverhampton Wanderers are no longer looking into deals for Divock Origi or Olivier Giroud, the Daily Mirror reports.

Following Raul Jimenez‘s fractured skull injury it seemed as if Nuno Espirito Santo was going to be dipping into the transfer market for a new striker, but after recalling Patrick Cutrone from Fiorentina, that no longer appears to be the case.

Nuno was said to be on the hunt for Chelsea’s Giroud or Liverpool‘s Origi, but instead, he’s been told to utilise the resources he has at his disposal as Wolves’ small squad continues to struggle.

– The Daily Mail is reporting that Arsenal and Chelsea are two of the clubs considering a move for Bursaspor sensation Ali Akman. The 18-year-old already has nine goals in 16 appearances over in Turkey this season, and while Galatasaray and FC Salzburg attempted to put forward a bid in December, their inability to sign him has opened the door for Europe’s elite to test the waters.

– Celtic have joined Rangers in the race to sign Wigan Athletic starlet Kyle Joseph, the Daily Mirror reports. With the Latics being in a difficult financial position it’s starting to seem as if their top players could end up leaving sooner rather than later, with Joseph being available for the likes of the two Scottish sides in a pre-contract deal this summer. Tottenham Hotspur are also interested in the player.

Leicester’s win over Chelsea rekindles dream of another title run, while piling pressure on Lampard
Was Bayern Munich’s throwback kit to blame for their shock DFB Pokal exit?
Man United’s Fernandes first to win four Player of Month awards in same year
Real Madrid see Aguero, Milik and Giroud as options
Can Bayern fix their defensive woes before it costs them more trophies?