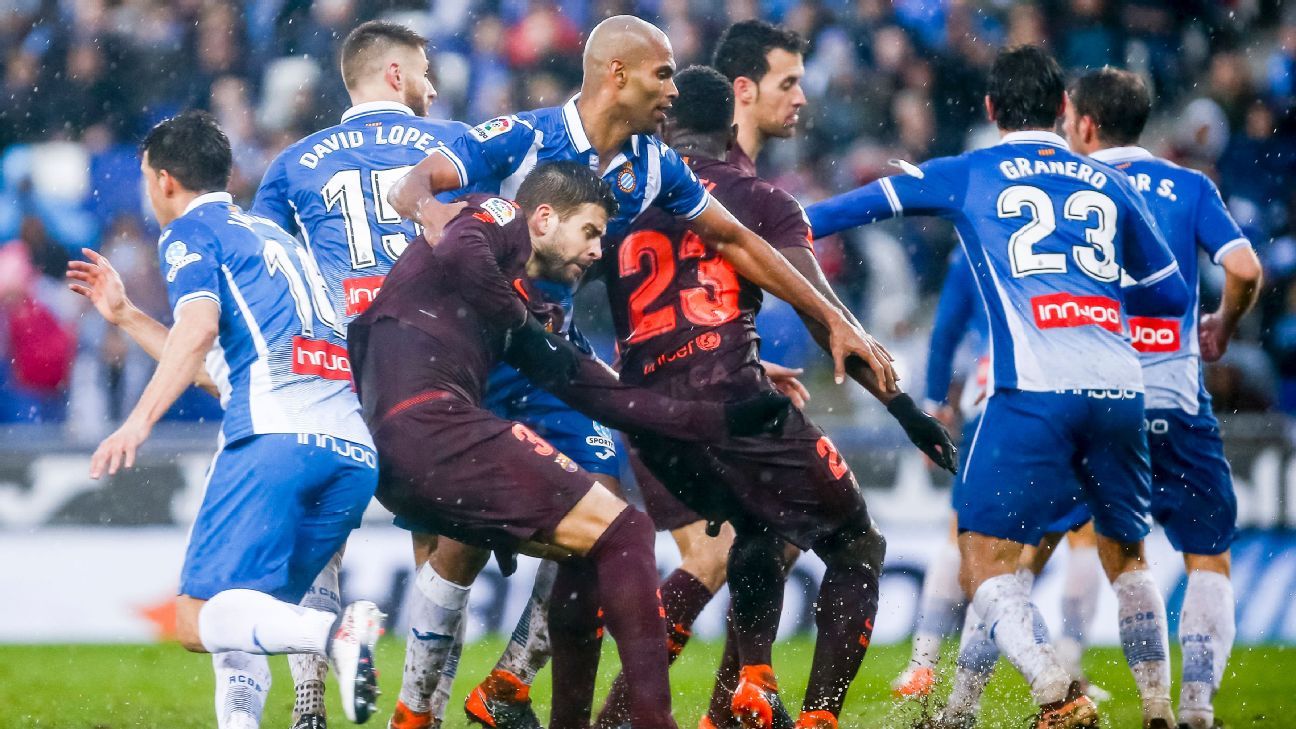 
BARCELONA, Spain — Ernesto Valverde has called for both sides to show each other respect when Barcelona travel to Espanyol in the Catalan derby on Saturday.

Last year’s four meetings between the two sides were marred with spats on the pitch and mud-slinging off it.

Defender Gerard Pique referred to Barca’s city rivals as “Espanyol from Cornella” after a Copa del Rey game between the two sides in reference to the area of Barcelona where they have played their home games since 2009.

Espanyol labelled it an attempt to discredit them and subsequently reported Pique to the Royal Spanish Football Federation (RFEF) for his comments.

Pique scored a late equaliser when the two sides met the following week in the league, celebrating by raising his finger to his lips in front of the Espanyol fans, telling them to be quiet.

However, despite last season’s string of fiery encounters — the sides met three times in two weeks in January — Valverde does not expect Pique to be the centre of attention this weekend.

“Pique’s having a really good season,” the Barca coach said in a news conference on Saturday. “We don’t have to think anything special about him and things that haven’t happened.

“The important thing is what happens on the pitch. And after, whatever happens, we have to shake hands. I hope that everyone shows respect and that there’s a good atmosphere.”

Barca returned to the top of the La Liga with last week’s win over Villarreal, while Espanyol, who were second at one point, have slumped to seventh. They’re seven points off the top.

“There’s no distance [between the two sides] but that doesn’t matter anyway,” Valverde added. “Points don’t count in this fixture. It’s played more with the heart than the head.

“Beyond their defeat to Girona [in their last match at Cornella-El Prat], they’ve been really strong at home. It’s a test of fire for us, especially as we have struggled to win away from home.”

Barca hope to welcome back Luis Suarez and Arthur Melo for the fixture, but Sergi Roberto, Samuel Umtiti, Rafinha and Malcom are all still missing.

Valverde highlighted the importance of Arthur, a summer signing from Gremio, to the team. The Brazilian midfielder’s not played since the 1-1 draw with Atletico Madrid at the end of November.

“He gives us a lot, that’s clear,” the coach said. “He helps us to keep the ball, gives us control, he wants the ball. The team is together in possession when he’s there because of his passing.

“Arthur helps in all those facets of the game. We hope he’s ready but there are options if he’s not: Arturo [Vidal], [Carles] Alena… Arturo is more vertical. Alena is similar to Arturo, but different, because he can drop deeper in terms of keeping the ball.”