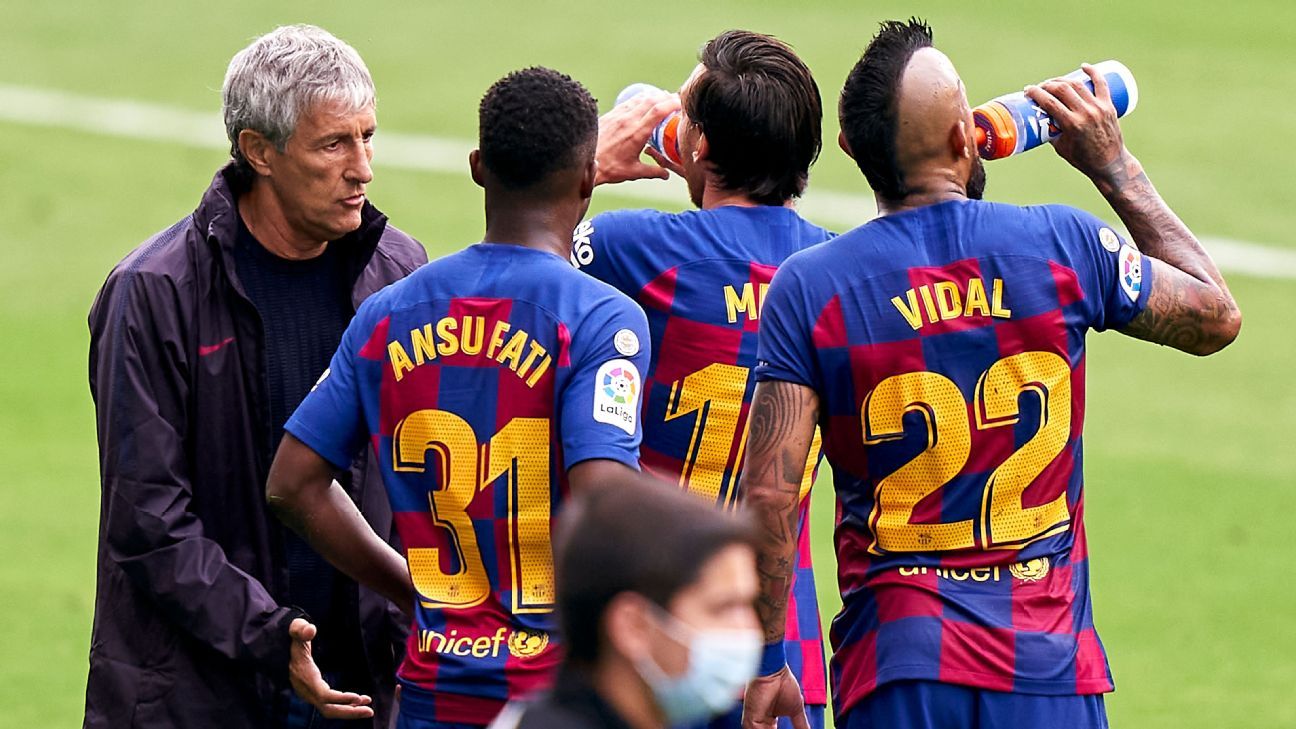 Barcelona manager Quique Setien’s relationship with his players is already showing signs of straining, with various sources having told ESPN they didn’t click from day one.

Barca led La Liga in January when Setien replaced Ernesto Valverde, who was sacked after the Spanish Supercopa defeat to Atletico Madrid in Saudi Arabia. However, Saturday’s 2-2 draw at Celta Vigo, coupled with Real Madrid‘s win at Espanyol on Sunday, saw them fall two points behind Zinedine Zidane‘s side at the top of the table with just six games to be played.

Setien signed a contract with Barca until 2022 — with a get-out clause in 2021 if the newly elected president does not want him to continue — but results and performances have quickly seen him lose credit with the players and the board of directors.

Luis Suarez appeared to deflect the blame on to Setien in Vigo on Saturday. Asked to explain Barca’s poor away form, he told the reporter the players were giving everything on the pitch and that “managers are there for a reason.”

On Monday, Setien tried to play down Suarez’s comments in his news conference ahead of Tuesday’s clash with Atletico Madrid. He said: “These little controversies will always exist. Everyone has their own way of seeing things. It’s normal.

“I wasn’t an easy player, either. We have to convince the players that the common idea is what’s important. The communication between us is good and I don’t give it any importance.

“When you don’t win, because of an isolated play at a certain moment, like the foul for Celta’s equaliser, everyone sharpens the knives. This is the circus we’re involved in. But the relationship we have with the players is good. It’s true there are sometimes disagreements, but I don’t see any problems worthy of talking about.”

Meanwhile, images over the weekend emerged of Lionel Messi giving Setien’s assistant, Eder Sarabia, the cold shoulder in the second half at Balaidos. During the drinks break, Sarabia twice tried to relay information to Messi, but the Argentina captain walked away from him on both occasions.

Sarabia previously made headlines in March, when he drew criticism for his language and touchline demeanour during the 2-0 loss to Madrid at the Santiago Bernabeu.

Sources have told ESPN that despite Setien’s best efforts, he and his coaching staff have struggled to win round the players, many of whom supported Valverde, since taking charge.

Sarabia often leads training sessions, where there has also been conflict. He demands intensity at all times, which has generated moments of tension, forcing Setien to become a firefighter.

Elsewhere, Marc-Andre ter Stegen has preferred to work with Jose Ramon de la Fuente as his goalkeeper coach instead of Jon Pascua, who arrived with Setien in January. The Germany international has a great relationship with De La Fuente, which has raised questions about the need for two goalkeeping coaches.

More recently, the doubts the players maintain have extended to the board.

President Josep Maria Bartomeu replaced Valverde with the hope of triggering an attitude change among the squad. But results and performances have left a lot to be desired.

Setien has overseen 17 games since taking charge, winning 11 of them, including all eight at Camp Nou, but results away from home and the level of performances have increased concerns in his ability to manage the club.

Of the 11 wins, seven have been by one goal, with Barca struggling to make the most of their possession. Meanwhile, they have won just three times on the road, failing to at Valencia, Athletic Bilbao, Napoli, Madrid, Sevilla and Celta.

A stoppage-time goal was needed to beat third-tier Ibiza in the Copa del Rey. That was followed by a 2-0 defeat to Valencia at Mestalla, when Setien played with three centre-backs. Those performances were put down to teething problems, but that didn’t prevent criticism. After losing to Valencia, Setien said it was just “one loss.”.

The Copa del Rey elimination to Athletic, despite an encouraging performance, added to the worries and a source said the substitutions in March’s loss to Madrid at the Santiago Bernabeu revealed Setien’s lack of understanding of his squad as Barca dropped off dramatically physically in the final third of the game.

Barca no longer analyse upcoming opponents live — restricting themselves to video analysis — and a source inside the dressing room told ESPN it feels as though they are creating their own problems by not working on positional play in training. Barca are finding it difficult to create and score at times.

Setien was not Barca’s first choice in January. He was appointed after sporting director Eric Abidal and CEO Oscar Grau failed to convince Xavi Hernandez to take the job during a trip to Qatar. Xavi rejected the job because the timing was not right.

Another coaching change has not been ruled out if Barca fail to deliver in La Liga or the Champions League this season.