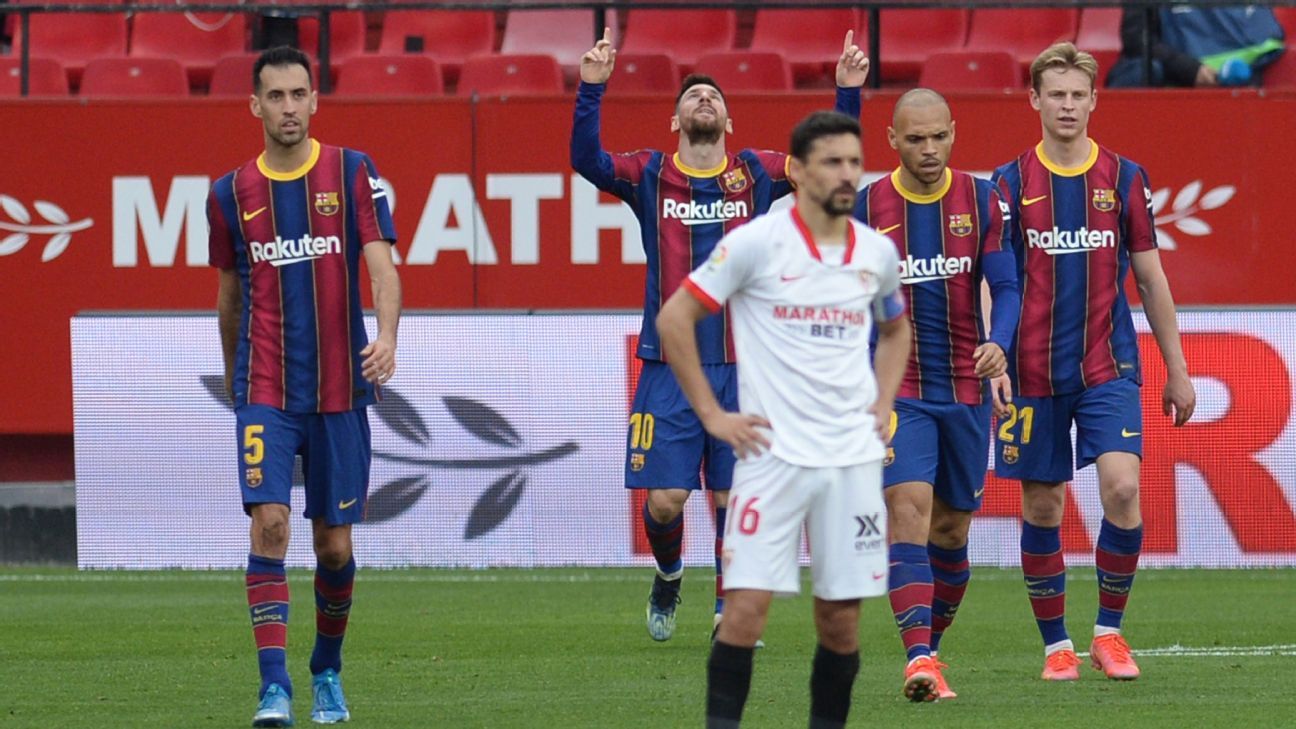 
Gerard Pique has warned Barcelona‘s La Liga title rivals that the Catalan side are right back in the race after an impressive 2-0 away at Sevilla FC on Saturday.

Goals from Ousmane Dembele and Lionel Messi temporarily moved Barca up to second in the standings, two points behind leaders Atletico Madrid, who have two games in hand and travel to Villarreal on Sunday.

Real Madrid, who face Atletico next weekend, are third, one point behind Barca ahead of Monday’s fixture against Real Sociedad.

It’s been quite a turnaround for Barca, who were 12 points off the pace and sat seventh in the table after losing to Cadiz in December. Koeman’s side are unbeaten in 15 league games since then and Pique says they are brimming with confidence after earning a first win against a top-four side this season.

“The league is on, of course it is,” Pique told reporters as Barca chase a third title in four years after missing out on top spot last season to Madrid.

“Teams have come back from worse situations in the past and the team, despite those two games recently [against Paris Saint-Germain and Cadiz] have done well in 2021. We can be confident.

“Sevilla, at their ground, haven’t had a shot on goal against us or even created a clear chance. It’s not the ideal situation, sure, but I have faith in the team.”

Pique was one of three Barca players to set alarm bells ringing in the win at the Sanchez Pizjuan when he was taken off in the second half with a knock. He said his change had been pre-arranged with coach Ronald Koeman but Barca will have to wait and see how serious knocks are to Pedri and Ronald Araujo.

Pedri injured his calf muscle and will undergo tests on Sunday, while Araujo was taken off as a precaution, shortly after replacing Pique, after appearing to re-injure his ankle in his first appearance following a three-week layoff.

A formation change helped Barca get the better of Sevilla, with Koeman switching to a back three and using Sergino Dest and Jordi Alba as wing bacs.

“Above all, we changed the shape because we wanted to try and press Sevilla high, but also playing with three centre-backs and wing backs made it easier to stop Sevilla playing,” the Barca coach told a news conference.

“It was a risky system. Without the ball, we pressed, we tried to play one vs. one. We wanted to take advantage of Dembele’s pace and the first goal was an example of that. How we played without the ball was the key and, overall, it was a really complete performance.”

Barca meet Sevilla again on Wednesday at Camp Nou in the second leg of their Copa del Rey semifinal. They trail 2-0 from the first leg.

“Of course we believe we can turn it around, but it will be a very different game,” Koeman said. “The first thing is to show ambition. If we produce a complete performance, we have a chance.”

After Arsenal sacked him, Emery regrouped and moved on. The Gunners have yet to do the same
Van der Sar talks up Man United role but no contact about replacing Woodward
Man United owner Avram Glazer refuses to apologise over European Super League involvement
Ed Sheeran becomes Ipswich shirt sponsor, but which other music icons did the same?
Arsenal’s Aubameyang opens up on malaria diagnosis ahead of Europa League semifinal