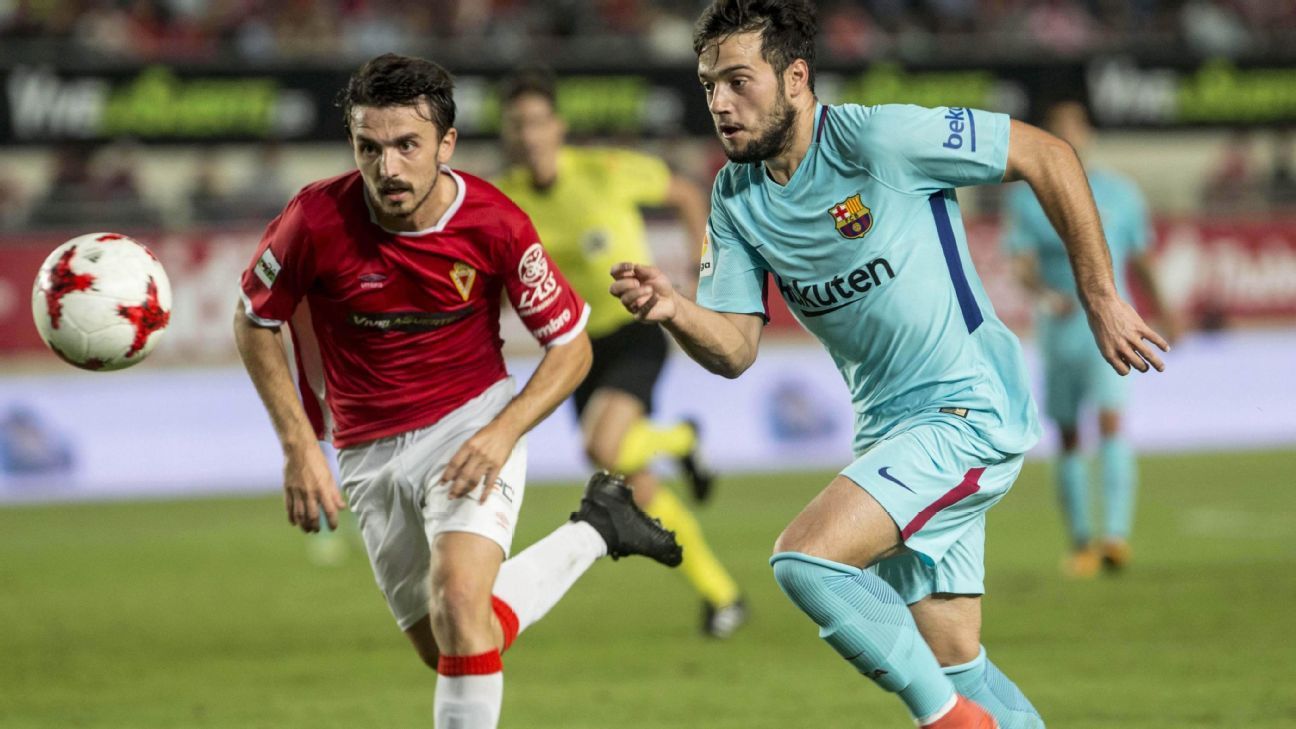 
Jose Arnaiz had a night to remember as he scored on his Barcelona debut as the Catalan side took a huge step towards the last 16 of the Copa del Rey with a 3-0 first leg win against Real Murcia.

Paco Alcacer and Gerard Deulofeu were also on target, but it was Arnaiz who caught the eye with a brilliant second-half display, capped with a fine solo effort.

Arnaiz, 22, joined Barca’s B team in the summer from Real Valladolid in a deal worth €4 million.

Four goals in nine appearances have since catapulted him into first-team coach Ernesto Valverde’s plans and on Tuesday he was one of two reserve team players, along with Carles Alena, to start in a much-changed Barca side at the Nueva Condomina.

“It’s impossible for it to have gone any better. I’ve started the season well and I hope I can continue like this.

“Making my debut with Barca’s first team, it’s what you dream of as a kid, to debut for a team as big as Barca. I’m so happy. I will always remember it.”

There was also a debut for teenage left-back Marc Cucurella, who replaced Lucas Digne for the final 10 minutes, and Valverde was happy with the contribution of all three Barca B players.

“They responded well to the opportunity they were given,” Valverde said in a news conference. “Arnaiz scored, Cucurella made his debut and Alena participated well.

“Arnaiz has confidence, he’s good in one-on-one situations, has a good shot… Without space, he struggled, but in the second half, when the opposition opened up, he was able to show off his best qualities. When he gets the ball in front of him, he has scoring in his head.

“They are all players we think can help us. They’re with the B team, but this is the first step. Let’s see if they can help us in the future, too.”

Unlike Arnaiz and Cucurella, Alena has played for the first team before. The 19-year-old made his fifth official appearance for the club — his first under Valverde — against Murcia and is hungry to be involved more.

“I think I played well,” he told reporters[http://www.sport.es/es/noticias/barca/carles-alena-este-ano-que-tengo-que-dar-salto-6377362]. “I’m happy, although I am aware I have to keep working harder. This year I have to take a leap forward and I have to work hard to be in the first team next season.

“I need to keep improving in training to be ready if my moment comes. I want to have more chances with Valverde. Games like this give me a lot of confidence.”

Alena, Arnaiz and Cucurella are all likely to make way this weekend’s trip to Athletic Bilbao with Lionel Messi and the six other first-team players given time off this week et to return.

Saturday’s trip to San Mames, which gives Barca the chance to stretch their unbeaten run to 14 games in all competitions, will be particularly special for Valverde, who left the Basque club to take over at Camp Nou in the summer.

“It will be an emotional game for me,” the coach said. “It always has been when I have been back there with other teams, too. I won’t talk about statistics, though, because it’s not gone well!

“Athletic are extraordinarily strong at home, so apart from the fact I’m going home and all those emotions, they will make it difficult for us.”