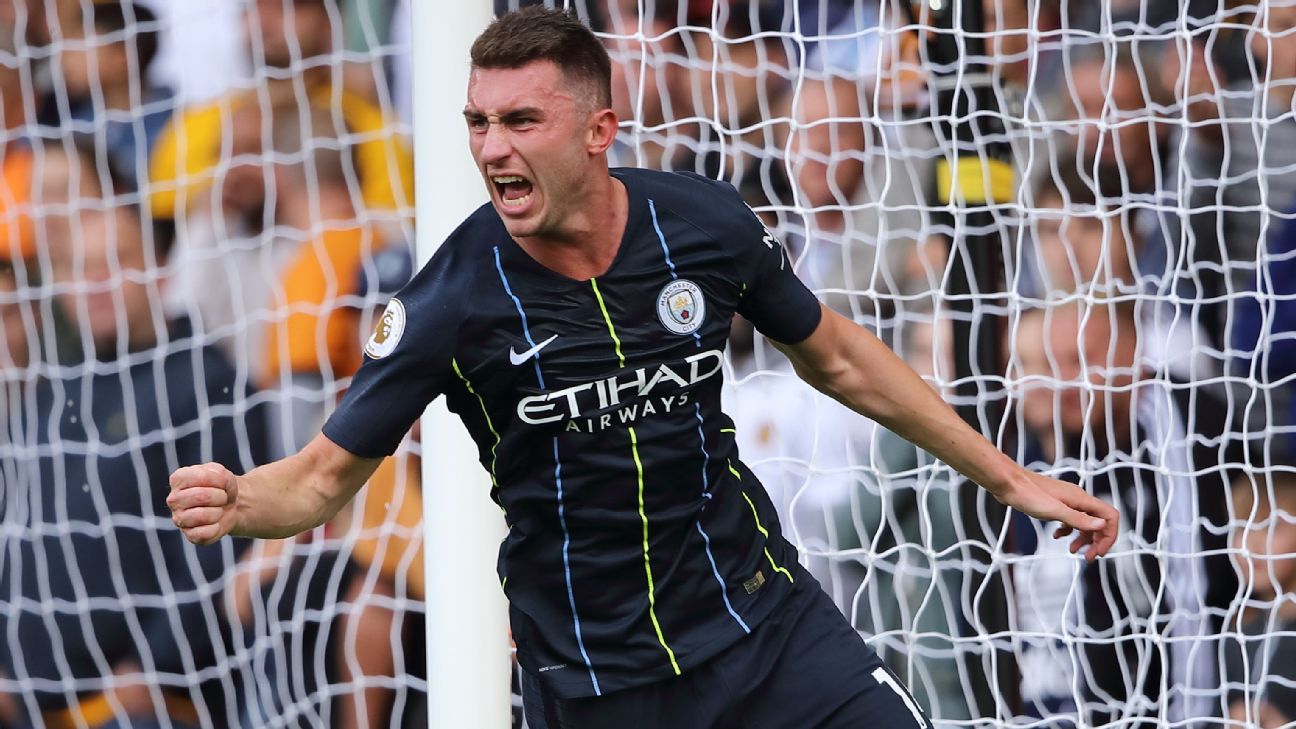 
Only one outfield player has completed every single minute of Manchester City’s outstanding start to the Premier League and Champions League this season, yet bizarrely, he is still yet to earn a single international appearance.

While his teammates were flying to all corners of the globe, Aymeric Laporte was again snubbed by Didier Deschamps ahead of France’s Nations League defeat to the Netherlands. That was followed by a friendly with Uruguay when Deschamps started with Mamadou Sakho of Crystal Palace — above the relegation zone on goal difference — and 32-year-old Marseille defender Adil Rami.

Insiders at City have told ESPN FC that they are perplexed at Laporte’s continued exile from the international setup after an exceptional start to the season. The 24-year-old has quietly become one of the most dependable defenders in the Premier League, with City conceding just five goals all season with seven clean sheets.

That is done in a side in which Pep Guardiola puts the focus on attacking, with the demands on keeping the opposition out much tougher. Laporte, his central defensive partner and goalkeeper Ederson are often the only three players occupying the back two-thirds of the pitch. Not only that, he is expected to play his part by keeping the ball moving quickly in City’s possession-based game and his contribution this season has seen him make more passes than any other player in the Premier League, with the exception of Chelsea’s Jorginho.

Guardiola has no doubt of his quality, and why would he? Laporte has never been on the losing side in a record 21 Premier League appearances. “He has a good personality and the arrogance to play at a high level,” the City boss said in November. Deschamps doesn’t agree.

France have strong options in the centre of defence, with Real Madrid’s Raphael Varane and Barcelona’s Samuel Umtiti the starting partnership for the World Cup final victory over Croatia. On top of that, there are a lot of highly rated young players coming through, such as Presnel Kimpembe of Paris Saint-Germain and Borussia Dortmund’s Dan-Axel Zagadou. But it would still seem strange to leave Laporte out of his latest squads, particularly with space for Rami and Sakho, whose clubs have conceded 21 and 17 goals respectively.

A suggestion put forward is that Laporte is not committed enough to playing for France. Laporte, born in Agen in Southern France, moved to Spanish side Athletic Bilbao as a 16-year-old and stayed for eight years.

It saw him flirt with the possibility of playing for Spain when he first began to be overlooked for Les Bleus. He was picked for three internationals between Oct. 2016 and Mar. 2017 without playing a single minute. After being left out of the next eight games, Laporte said: “I have always said that my country is France, but if I am not selected then there is an alternative.”

Laporte had showed his desire to play for the French when he played in 16 under-21 internationals in just two years — missing only two appearances because of a knee injury. His under-21 boss Willy Sagnol, a former teammate of Deschamps, wasn’t as convinced by his attitude.

“Every time he arrived at a gathering, he always had a problem: thigh, back, head, ear, toe — we always asked the question whether he was happy to come. As he was not training, he was not playing, and suddenly he was not happy,” Sagnol said in October. “It was hard to manage. I have never felt a real desire on his part to wear the blue jersey.”

Laporte, fellow surprise omission Germany’s Leroy Sane and Claudio Bravo of Chile were the only senior City players to miss the World Cup, and he admitted it was tough to watch from afar. “It was jealousy to be honest,” he said in preseason. “It didn’t come as a surprise to me that I wasn’t involved. I hadn’t been in the previous squad that had been named without me. But it was still a little disappointing for me not to be involved.”

Four months on and Laporte is still no nearer Deschamps’ squad.

Another reason given for his continued absence is that he is seen as a complex loner who doesn’t integrate into the squad. But sources have told ESPN FC that suggestion is completely refuted with Laporte settling quickly into the City squad after making the difficult decision to leave Athletic behind. He is happy at City since moving in January and has enjoyed short breaks to Greece and Italy with teammates Sergio Aguero and Brahim Diaz.

Laporte’s continued absence is a huge benefit to Guardiola, who has a first-choice defender enjoying a rest at every international break. But the Catalan believes it’s important for his players to gain experience by playing at top-level tournaments with their country.

“Laporte is not selected but he will be selected,” Guardiola said in October. “It is difficult to find a better left central defender than him in the world.” The City boss is rarely wrong, but Deschamps shows no signs of proving him correct.