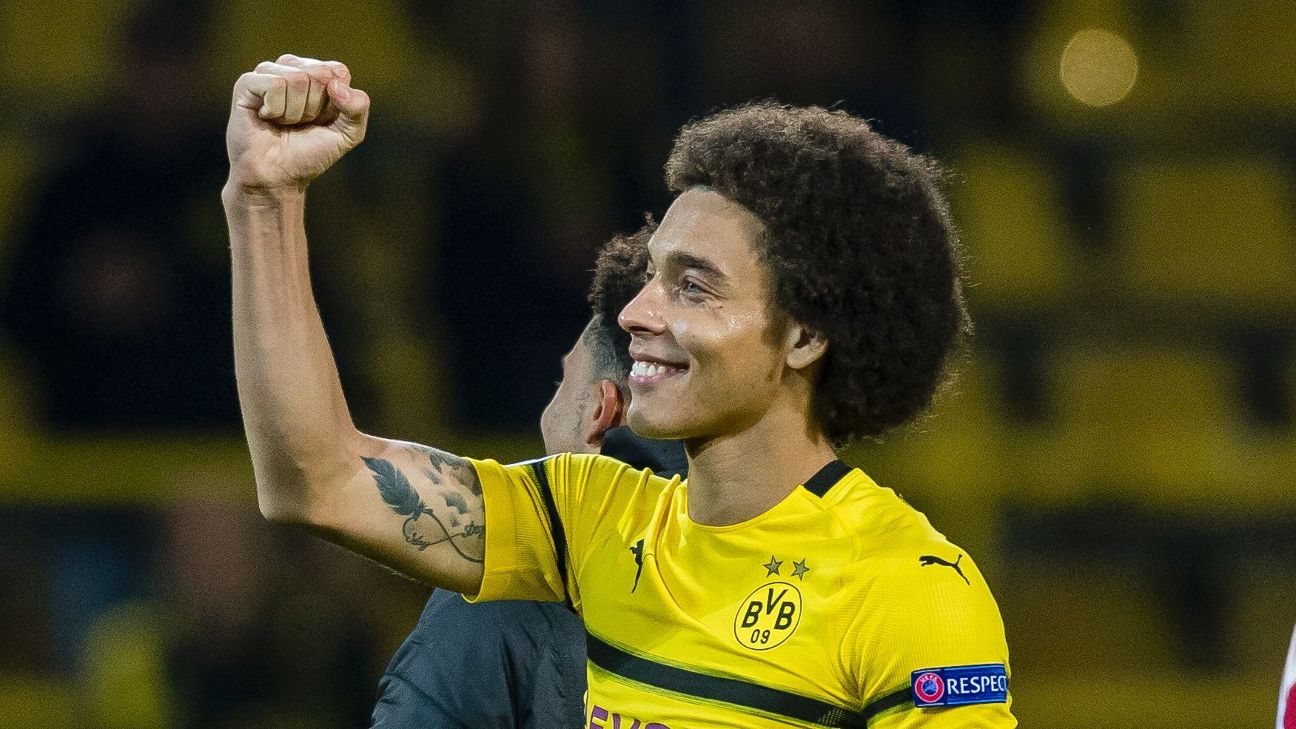 
DORTMUND, Germany — Borussia Dortmund have their desired start in the Champions League as they beat AS Monaco 3-0 on Wednesday night and now have six points in Group A after two rounds.

The Black and Yellows had to make do without Christian Pulisic, as the 20-year-old picked up a torn muscle fibre before the game and is likely to miss the next league match against Augsburg as well as the international week with the United States.

His absence showed in the first half, as “super-sub” Jadon Sancho, who extended his contract until 2022 on Tuesday, struggled in a rare start from the beginning. But the Englishman showed his class six minutes after the break, feeding half-time substitute Jacob Bruun Larsen with a perfectly-timed pass. The 20-year-old kept his composure and slotted home. After 72 minutes, Paco Alcacer doubled the lead — just two minutes after thwarting a penalty. Dortmund continued to create enticing scoring chances but would only score in stoppage time as Larsen’s clever low cross connected with Marco Reus at the far post.

Once the Black and Yellows were 2-0 up, the Westfalenstadion was bouncing and singing at full voice. After last year’s Champions League disaster, a dominant and controlled win was important for the home crowd. And once again, the Black and Yellows improved as the game went on. It’s hard to grasp how they look like a team that is completely unable to create any threat and from one second to another, they are producing killer through-balls on a conveyor belt.

If one wants to find a criticism, Dortmund’s first-half performance wasn’t too encouraging, but performances in recent weeks have shown that Lucien Favre’s side always performs better after the break. Another concern is Pulisic’s injury and the fact that Sancho went off after 82 minutes, holding his thigh.

7 — Favre just has the magic hands right now. His first substitute opened the scoring, while a young team showed a mature performance on the international stage.

GK Roman Burki, 7 — Burki’s abilities were tested for the first time after 19 minutes as he defused Jemerson’s thumper from distance.

DF Lukasz Piszczek, 5 — The Pole was back in the starting line-up after missing two games and it became apparent how big the difference in pace is in comparison to Real Madrid loanee Achraf Hakimi. Piszczek hardly made his experience count, unnecessarily misplacing two passes that made life very hard for his teammates.

DF Manuel Akanji, 9 — Manuel Akanji was as dominant as one can be in defence. His development has been quite remarkable.

DF Dan-Axel Zagadou, 8 — Remarkable is also a way to describe Zagadou’s development. The 19-year-old often struggled severely in his previous appearances but in the past two games, he looked extremely composed.

DF Abdou Diallo, 7 — Diallo improved as the game went on. Especially his dribbling on the left side proved some cheers from the ranks. Defensively he looked untroubled for the most part.

MF Axel Witsel, 9 — Around the hour mark there was a moment when the match was almost wild but the Belgian calmed the match down before Dortmund were susceptible to a counter-attack while being 1-0 up.

MF Thomas Delaney, 6 — While Delaney’s forward passes are rare, his defensive presence cannot be discounted in the Champions League.

MF Marius Wolf, 4 — The 23-year-old was at the end of Dortmund’s best chance in the first half, forcing Diego Benaglio to a spectacular save after taking a shot on the turn. Benaglio injured himself and had to be subbed off and Wolf followed suit at the break as he otherwise offered too little going forward.

MF Marco Reus, 8 — Reus woke up in the second half. He won the penalty, assisted Alcacer’s goal and fired home for Dortmund’s third in stoppage time.

MF Jadon Sancho, 7 — Things were not as easy for Sancho at the beginning but he delivered in the second half with a perfectly timed assist. Midway through the second half, he put the ball over the goal frame in a one on one with the keeper.

FW Paco Alcacer, 8 — The Spaniard confirmed the first impressions of his substitute appearances. He is a highly intelligent striker that makes life incredibly hard for defenders due to his elusiveness. In the 70th minute, he smashed the ball on the floor in frustration having just pinged a penalty against the crossbar but just two minutes later, the Spaniard made up for it as he rounded Danijel Subasic and hit it past two defenders.

MF Jacob Bruun Larsen, 8 — The Dane showed his intelligence and composure as he scored Dortmund’s opener and assisted the last goal of the night.

MF Julian Weigl, 7 — With a bit over 20 minutes to play, Weigl produced one amazing through ball that was not converted and otherwise looked very comfortable in midfield.

MF Maximilian Philipp, NR — Was brought on for the injured Sancho in the final 10 minutes.