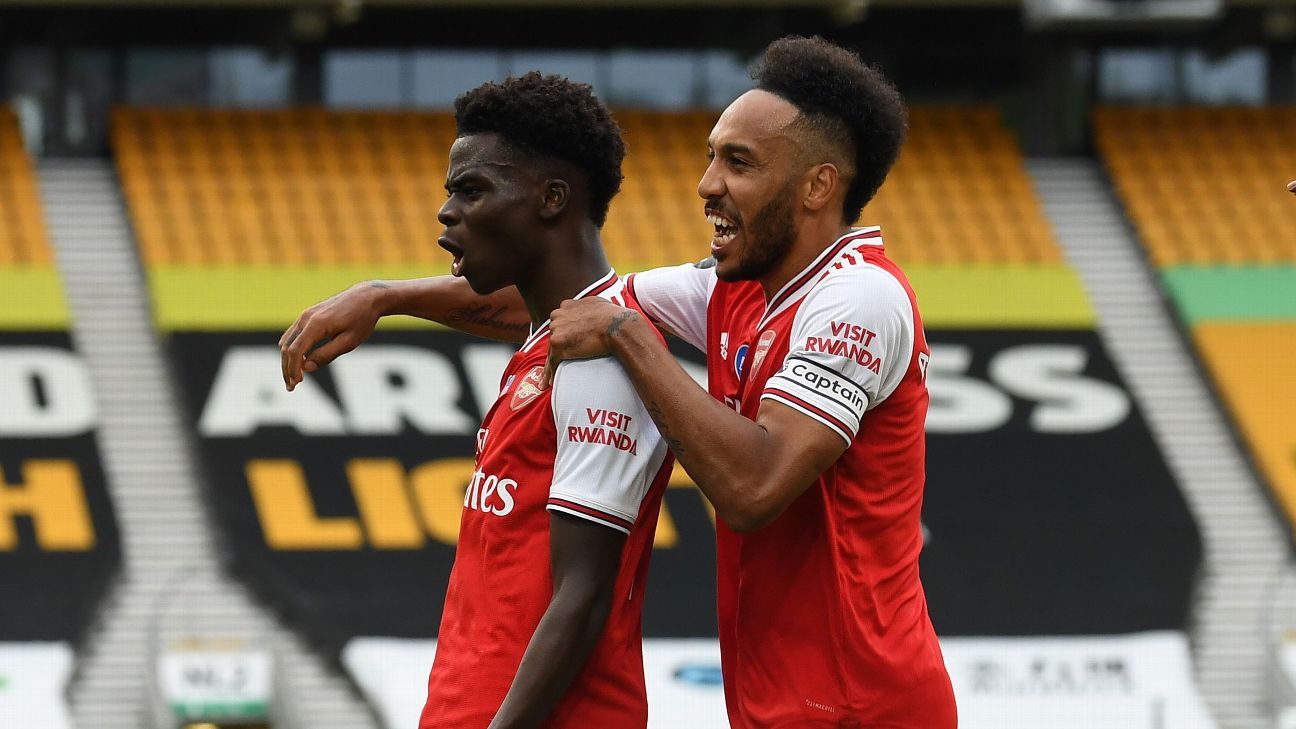 
There was a tantalising glimpse into Arsenal’s future when Bukayo Saka scored the 43rd-minute goal that set up the Gunners’ crucial 2-0 Premier League victory at Wolves. The teenager’s first league goal not only dented the home side’s hopes of Champions League qualification, but also boosted Arsenal’s previously flickering prospects.

It has been a memorable week for Saka, 18, who days earlier ended uncertainty over his future by signing a long-term contract. At Molineux, he put the finishing touch on a move started by Pierre-Emerick Aubameyang, whose clever pass on the edge of the Wolves penalty area enabled Kieran Tierney to cross for Saka to open the scoring.

Aubameyang’s contribution was vital and reflective of his overall display, which set a fine example as Arsenal’s captain. If the club’s future is to be successful one with the likes of Saka, Eddie Nketiah and Joe Willock to the fore, the 31-year-old skipper must be the next player to extend his stay at the Emirates Stadium.

With the former Borussia Dortmund forward in the team, manager Mikel Arteta can plan the next stage of his rebuilding job with confidence. If Aubameyang does not agree a contract to replace the one that expires next summer, though, all of the promise and progress of recent games risks being shunted into reverse.

Promise and progress was seen on Saturday. Arsenal had to ride out heavy Wolves pressure in the second half, showing the kind of resolve so often absent from the red-and-white shirts, before sealing the three points four minutes from time when substitute Alexandre Lacazette doubled the lead with his first away goal in the league since February 2019.

Incredibly, this was the first time Arsenal had earned an away win against a team placed higher in the table since winning at Leicester in September 2015. Having looked to out of the race for Champions League qualification after losing at Brighton two weeks ago, they have hope.

“Every game now, we have no margin for error, we know that,” Arteta said. “We try to go again and start thinking about Leicester (Arsenal’s next opponents, on Tuesday) tomorrow, but I am in the race to try and win against Leicester and we will see what happens, but it (Champions League) looks possible.”

Sealing a place in club football’s biggest competition would hand Arteta a fast-track pass to resolving the problems in his in-tray, starting with Aubameyang. Sources have told ESPN that the Gabon international is open to staying, but age dictates that his next deal offers a final chance to land a big rise.

He will not be short of offers. Since arriving in England for £56 million ($79m) in January 2018, Aubameyang has scored 63 times in 102 games overall; in midweek, he netted against Norwich to hit the 50-goal mark in the league in his 79th appearance, four games quicker than Arsenal’s all-time record scorer, Thierry Henry.

Aubameyang is second only to Leicester’s Jamie Vardy in the race for the Premier League Golden Boot — Vardy leads 21-19 — and it is safe to say that Arsenal would be languishing in mid-table without the goals of their talismanic forward. But his performance at Wolves, where Arsenal ended the 100% winning run of Nuno Espirito Santo’s side since the restart, showed there is much more to Aubameyang’s game.

His awareness in the build-up to Saka’s goal highlighted his ability outside the penalty area, while he showed leadership and desire in the by helping out defensively as Wolves chased an equaliser. At times, he was almost doubling up at left-back with Tierney.

Arteta has made it clear that he only wants players with the right attitude — a mantra alluded to more than once when asked to justify the ongoing absence of Mesut Ozil and Matteo Guendouzi, neitjer of whom featured on Saturday — and in Aubameyang, he has the perfect embodiment of what he expects.

When the captain and star striker leads by example, it is easier for the manager to ensure that others follow. Saka and his fellow youngsters look up to Aubameyang and follow his lead, hence the reason why it is so important for Arsenal to keep him. If he does depart, there is little veteran leadership elsewhere.

Arsenal are at least a year behind Chelsea and Manchester United in terms of squad evolution and this summer will see the manager clear out players who do not fit his requirements. Aubameyang should not be one of those; the club’s path back to where it expects to be will be shorter with him on the journey.