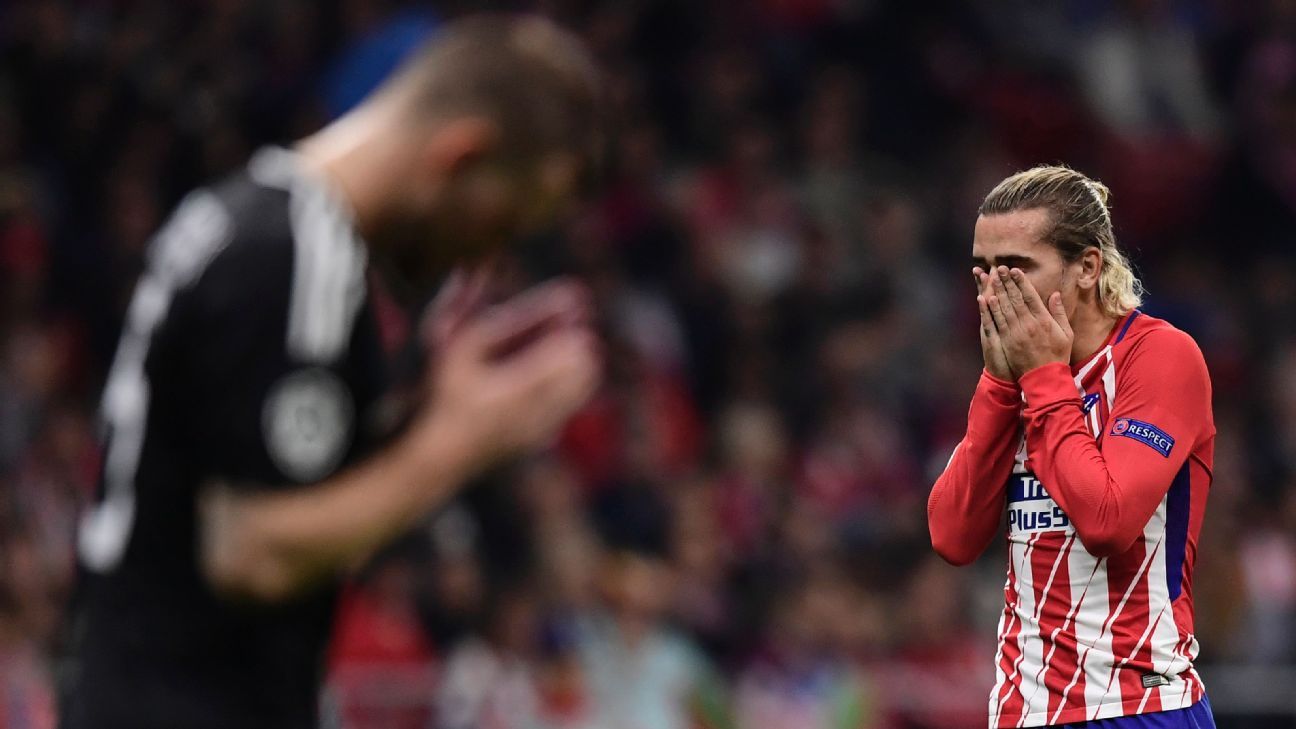 
MADRID — Atletico Madrid began 2017-18 boasting of how they had overtaken giants Bayern Munich and Barcelona to move into second place in the UEFA rankings for club competitions.

However the 2014 and 2016 Champions League finalists now find themselves almost out of the competition already following Wednesday’s 1-1 home draw against rank outsiders Qarabag.

The most obvious problem for Atletico in four Group C games so far has been missed chances.

They dominated when drawing 0-0 in gameweek one at group leaders Roma, whose goalkeeper Alisson was man of the match. But that set a pattern. Simeone’s side have scored just two of the 76 shots they have taken in four outings in the competition: those were an Antoine Griezmann penalty in the 2-1 home defeat against Chelsea, and Thomas Partey’s 25 yard stunner out of the blue against Qarabag. Many “ordinary” chances have come and gone, and they are now woefully short of confidence in front of goal.

That has been made worse by the fact that the returning Diego Costa cannot play until January due to the club’s FIFA ban on registering new players throughout 2017. Griezmann appears still affected by last summer’s indecision over his future, and has just three club goals this term, and none in his last six outings.

Niggling injuries to key midfield playmaker Koke and winger Yannick Carrasco have come at a bad time too; Koke’s ability to unlock defences has been especially missed. Of Simeone’s supposed best XI only two of the front six were available against Qarabag. Kevin Gameiro has just one goal this season, and knows he is only marking time until Costa can come in.

Meanwhile the defensive solidity upon which Atletico built their success in recent years has deserted them. The trademark of Simeone’s side used to be how comfortably they soaked up pressure for long periods, then struck clinically when the time came. They were also physically and mentally resilient — so it is remarkable that seven of the 10 goals conceded this season have been headers.

“Our identity was to not concede goals, and then take the chances we made,” club captain Gabi admitted on Wednesday night. “It’s the other way around now.”

When signing his new contract in September, Simeone claimed that the FIFA transfer ban had actually been a positive — as the club had focused on retaining key players coveted elsewhere, including Griezmann, Koke and Saul Niguez.

However the inability to strengthen the squad where it was needed has hurt them badly. Wednesday’s substitutes, the uninspiring Nico Gaitan and Fernando Torres, made zero impact and great club servants like Diego Godin and Juanfran are showing their age at present.

An inevitable settling in period at their new Wanda Metropolitano home is also not helping. Atletico lost just one of the 23 European games under Simeone at their old creaking Vicente Calderon, conceding just six goals in over 2,000 minutes of football. Opponents used to hate playing at probably the most intimidating stadium to visit in Spain.

The modern Wanda is much more welcoming. On Wednesday it was amazing to see Qarabag, beaten 6-0 at Stamford Bridge a few weeks ago, passing the ball around confidently and making Atletico chase them, even when reduced to 10 men.

Such scenes must have hurt Simeone especially, and the Argentine was hoarse when he faced the press an hour after the final whistle. “Any explanations would just be excuses,” he admitted, while also pointing out that during his time in charge his team had specialised in winning tight “arm-wrestles” which they have been failing to do recently.

It is true that six of Atletico’s last seven games in all competitions have been draws. They are the only team to take a point domestically against runaway La Liga leaders Barcelona, but were also unable to beat third tier Elche in the Copa del Rey. The breaks are not going their way, and they do not expect them to at present.

Next up to visit the Wanda are stumbling Real Madrid on Nov. 18, with a must-win UCL game against Roma the following Wednesday. Two ground-out victories would change the mood considerably.

If that happens, come January things might look very different. Especially if Costa and fellow summer signing Vitolo (on loan at Las Palmas) can hit the ground running. Further arrivals are also possible when the window opens.

The problem is that by then Atletico are likely to be in the draw for the Europa League — a competition they won in 2012 but had assumed they had outgrown.

“Looking at it now, the Europa League seems like shit,” Gabi admitted forthrightly late on Wednesday night. “Although if we have to play in it, we will try and win it, like always.”

A miracle escape in the Champions League is also possible, but nobody around the Wanda really believed that on Wednesday night.