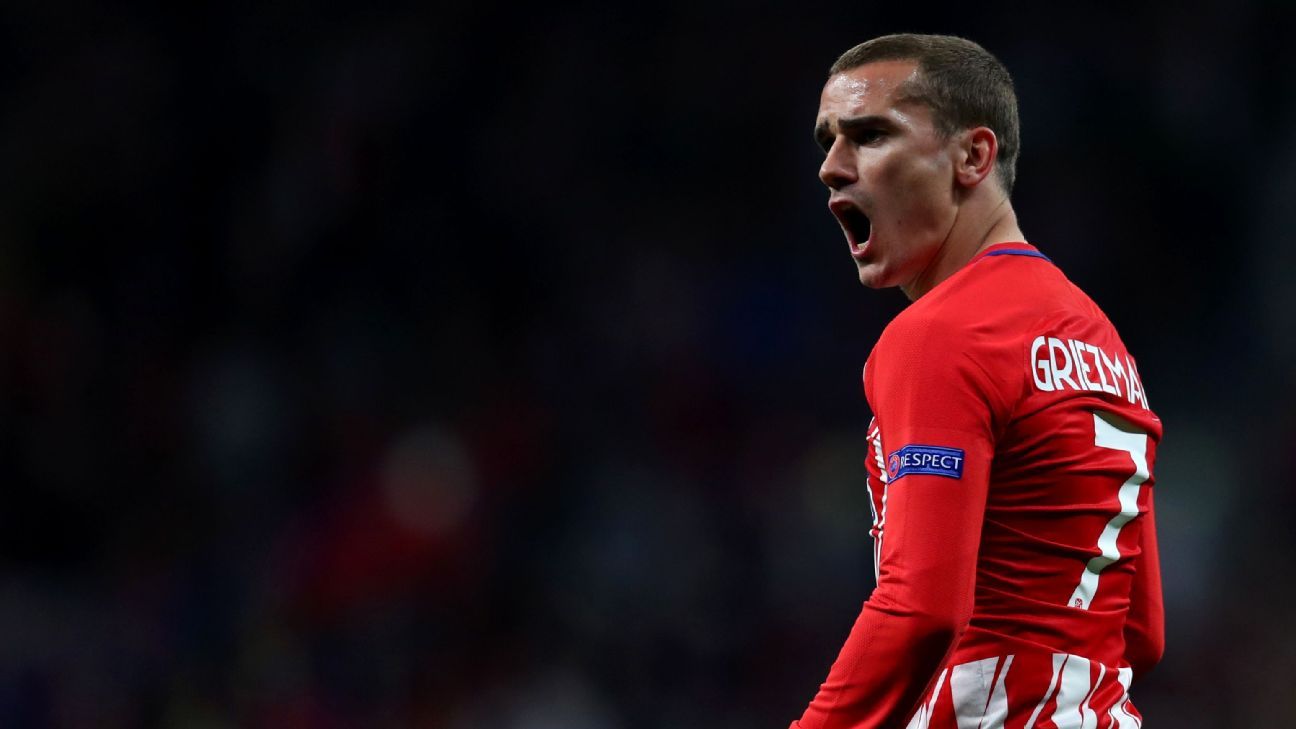 
On the wall of Antoine Griezmann’s beautiful villa in the exclusive Madrid suburb of La Finca, there are two David Beckham shirts: one bearing the crest of Paris Saint-Germain and the other in the colours of LA Galaxy.

The London-born midfielder who became a legend for Manchester United — leaving home young, coping with the fight that a southerner had to show to be accepted in the gritty north, letting his talent speak more loudly than his words — was, and remains, Griezmann’s primary hero.

The Lyon-born striker who had to shuck off homesickness after moving south, move to a new country, learn a new language and fight off the stigma of an ill-advised choice of when and when not to fiesta in Paris discos if you are on international duty could have chosen much worse than the former England captain in his search for inspiration.

It’s also true that Griezmann’s passion for the NBA is as fundamental, as much of an obsession, as Gareth Bale’s for golf or Gerard Pique’s for tennis. If the Frenchman had been born taller, then who knows, basketball’s gain could easily have been football’s loss.

He’s such a fan that he has regularly travelled to the United States to watch the Los Angeles Lakers and the Golden State Warriors, but his team is the Chicago Bulls — always has been, always will be, good times and bad.

On Wednesday, Griezmann returns home. Lyon, the club where he was told he was too small, that they had no faith he’d even make it as a professional footballer, never mind into their youth academy, which was about 40 minutes’ drive from his front door.

You know, already, that this is feasibly the Frenchman’s last important game for Atletico Madrid, the club where he has been taken from raw, untamed talent and turned into one of Europe’s superstar strikers.

Exceptional at what he does, still burning with the passionate need to win more trophies and earn more recognition and of an age that the queue for his services is understandably huge. Barcelona have made no secret of their willingness to pay, at least, €100 million — possibly as much as €115 million — for his talents.

Atleti have made no secret of their fury that this subject has become so noisily public in advance of their Europa League final against Marseille.

Leaving aside the narrative about whether Atletico are about to add to their rich vein of strikers who in recent years soared and then flew away (Diego Forlan, Fernando Torres, Sergio Aguero, Radamel Falcao and Diego Costa), Wednesday isn’t simply a trophy opportunity for Griezmann. It’s a chance for him to settle his Rojiblanco account properly, leave evidence as to whether he’s good or great and mimic his two great inspirations: Beckham and Michael Jordan.

Griezmann at Atleti has been a success, no question.

The club has benefitted in points, in reputation and financially, in terms of Champions League revenue (one final, one semifinal, one quarterfinal since he joined), and the 27-year-old heeded Diego Simeone’s plea to stay and help fill the new Wanda Metropolitano Stadium last summer instead of, as planned, joining Manchester United. If he’s sold for his buyout clause (which drops to €100 million on July 1) then Atleti will profit by €70 million.

But there are provisos. In each of his seasons in the Spanish capital, there have been gaps to show that he isn’t yet the finished article: scoring droughts, dips in intensity, occasional clips round the ear from Simeone and one penalty in particular.

Two years ago in Milan, the Champions League final was a Madrid derbi for the second time in three years. Madrid, winners the last time, led again. Then, a penalty for Atleti. Griezmann stepped up to take it and sent Keylor Navas the wrong way, but his overly powerful shot cannoned back off the bar and away to safety.

Fate dictates that had that gone in then, all other things being equal, Yannick Carrasco’s subsequent goal for Atletico would have made them European champions for the first time. Fate also dictates that Griezmann, for whatever reason, had absolutely no problem in subsequently burying his penalty in the spot-kick shootout that his team lost, thanks to Juanfran’s heartbreaking miss.

From that painful night in Milan, until he faces Marseille at Stade Lyon this week, two years have passed in which Griezmann helped steer France to the final of Euro 2016 with seven goals, including two beauties against Germany to eliminate the world champions in the semifinal.

But the final, again, wasn’t his moment.

A clear-headed chance, set up by Kingsley Coman, fluffed. Another bouncing off the post from Andre-Pierre Gignac’s shot but slithering away from Griezmann because, well, sometimes that’s just what fate has in store for you.

He looks youthful, boyish in countenance and slender rather than all muscle and power. He acts youthfully too; funny in person, full of boyish and witty enthusiasm when he scores and celebrates with a dance, a stance or even, back at Real Sociedad, by occupying a car parked just behind the goal and encouraging his teammates to come and join him for a drive.

But he’s not a kid. Twenty-seven already and without a major senior trophy to his name. Time is ticking.

Wednesday beckons. In theory, Atleti have the advantage over Marseille — in fact, almost all of the advantages. They have a better squad, more quality man for man, far more experience in big finals — and in winning them — and against French opponents who are likely to lose at least one of their stars to injury.

The fact remains, however, that this is time for Griezmann to dig deep within the well of his own ability, his own determination to win big. If, and even if he’s not fully decided it’s clearly at the forefront of his mind, this feels to him like the moment to leave Atletico Madrid and to line up with Lionel Messi, Luis Suarez and his countryman Ousmane Dembele at Barcelona next season, then he needs to sign off like his heroes did.

Having fallen foul of Sir Alex Ferguson (they made up in due course), Beckham’s last Champions League game for Manchester United was a two-goal performance in a 4-3 win over Real Madrid at Old Trafford. That same season, Beckham scored in his final home game in a victory that would clinch the Premier League title for the wearer of that famous United No. 7 shirt.

But, his being Beckham, there was more.

At Madrid, again, his relationship with his manager fractured because he admitted that he was going to head to Major League Soccer and to Los Angeles that summer. Fabio Capello stopped using him and told him that he wouldn’t play again.

Departures, as Griezmann needs to realise, are not often harmonious. But Beckham produced “the right stuff.” He trained harder, began to be trusted and picked, and helped inspire Real Madrid to one of only four Liga titles in the past 15 years.

His last game for Los Blancos? A title decider won 3-1 at the Bernabeu.

For the Galaxy, he played his last match in an MLS Cup final against the Houston Dynamo in December 2012, and lo and behold, the right stuff surfaced again, and so did the winning score line: 3-1, glory and goodnight.

Jordan, too, didn’t merely have apparently perpetual greatness during his trophy-littered career; he knew what the all-time golden goodbye should look and feel like.

Game 6 of the 1998 NBA Finals — you remember, right? Five-point-two seconds left, Bulls losing, Jordan from 20 feet for the winning points in his last competitive action for the team Griezmann adores.

Two things we can say about Griezmann: He’s special, and we don’t yet fully know whether he’s great.

Whether he opts to stay and take on the challenge of taking Atletico to the Champions League final in their own stadium in June 2019 or jumps ship to try to help Messi & Co. get there is completely up to him.

Either way, now, against Marseille on a night when some of the ghosts of Milan 2016 can be laid to rest, is the time for him to show how much in common with Jordan and Beckham he possesses.

Atletico Madrid’s three-for-one offer for Antoine Griezmann rejected by Barcelona
Man City reserve goalkeeper Scott Carson relishing role as mentor to Zack Steffen but still hopes to play
Liverpool vs. Leicester City – Football Match Report – November 22, 2020
For Arteta and Arsenal, the honeymoon may be over
After his England breezed past Iceland, Southgate has plenty of questions to answer ahead of Euros