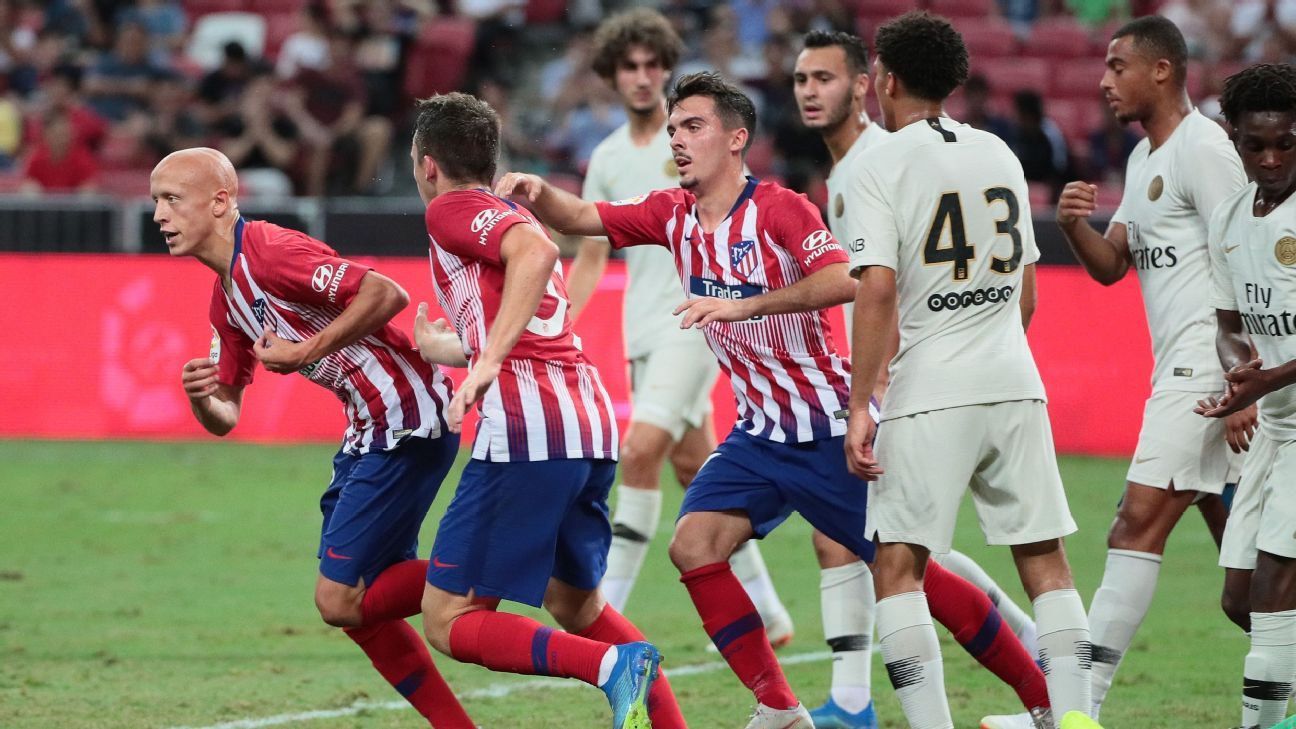 
Atletico Madrid coach Diego Simeone said his younger players had given him a “positive feeling for the future” despite Monday’s last-gasp 3-2 International Champions Cup defeat to Paris Saint-Germain in Singapore.

An Atletico team featuring just three of last season’s senior side went into the break 1-0 behind thanks to Christopher Nkunku’s close-range effort near the half hour mark, and fell two down with 20 minutes remaining when Moussa Diaby took advantage of slackness at the back.

The Rojiblanco youngsters kept battling and 17-year-old Victor Mollejo rammed home after a scramble at a corner to become the first player born in the 21st century to score for Atletico, before pressure from Borja Garces, 18, led to PSG centre-back Antoine Bernede put through his own net.

Even after PSG youngster Virgiliu Postolachi curled home a winner for the Ligue 1 side with the very last kick of the game, the Atletico coach told the postgame news conference that he was happy with how his team had performed.

“Atletico played well, the young and older players,” Simeone said. “It was a nice game, we played with almost 10 youth-teamers… The kids competed very well, and left us a positive feeling for the future. This gives them experience for what is coming.”

Less impressive were senior forwards Kevin Gameiro and Luciano Vietto, who both missed chances to score, amid continuing rumours they will be sold before this summer transfer window shuts.

“It is good that the team created chances,” Simeone said when asked if he was disappointed with the pair’s displays. “It is about patience and working with them.”

Having beaten Arsenal on penalties in their first ICC game last Thursday, Atletico now head back to Europe for upcoming friendlies at Stuttgart and Cagliari, ahead of their final ICC game against Inter Milan at the Wanda Metropolitano on Aug. 11, then the UEFA Super Cup meeting with neighbours Real Madrid in Tallinn on Aug. 15.

“We are working on getting the balance between what the players need and what we need to get everybody ready for Aug. 15,” said Simeone. “We are proud to be competing against big teams. We wanted to get into these tournaments, and I hope we can grow as a club and a team with these preseasons.”

Back in Madrid on Monday, Atletico presented their new €70 million signing Thomas Lemar at the Wanda Metropolitano.

Having had less than two weeks’ holidays after winning the World Cup with France in Russia, Lemar admitted he had already experienced how tough preseason training at Atletico was after joining up last Friday.

“I’ve not had much holidays, but that is not important,” Lemar said. “I am really looking forward to playing, to meeting the coaching staff, the players… Holidays will come another time. Now I just want to settle in as quickly as possible.

“I am seeing that it is different from what I knew at Monaco, much more demanding, more difficult, I am getting used to it bit by bit.”

Lemar said his fellow World Cup winners — and now new clubmates — Antoine Griezmann and Lucas Hernandez had helped persuade him to join a club where the demands are high.

“That was not decisive in my choice, but it did have an influence,” he said. “Antoine and Lucas told me a lot about the club, how things are done here. I am very happy. I know there are demands here, if I have to run more, cover more ground [in games], then I like that idea.”

Also joining Atletico this summer have been Portugal winger Gelson Martins, former Villarreal midfielder Rodrigo and back-up goalkeeper Antonio Adan from Real Betis. Lemar was asked if he hoped to follow World Cup success with victory in the 2018-19 Champions League final, which is being played at the Wanda Metropolitano.

“Of course we have that as an objective,” he said. “We will do everything to go as far as possible, and to try and win the Champions League.”