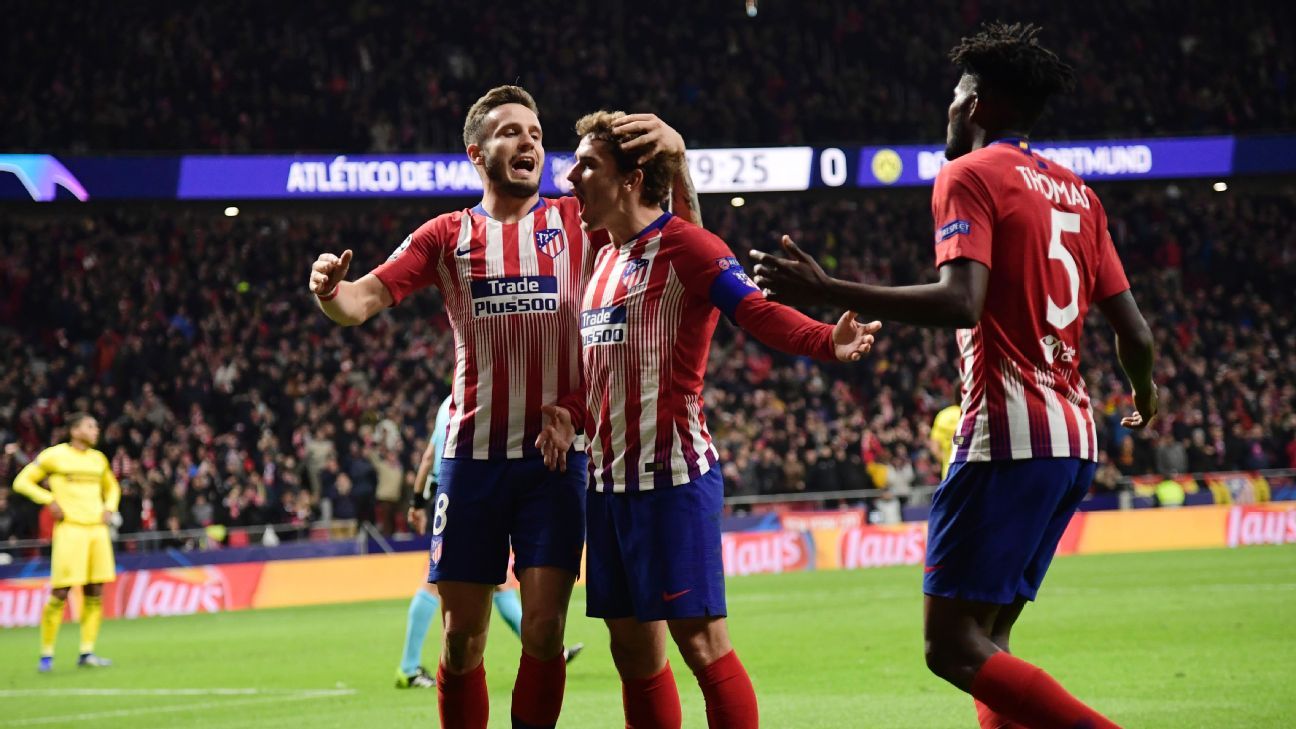 
Atletico Madrid dominated a toothless Borussia Dortmund to win 2-0 in their Champions League Group A match on Tuesday, exacting some revenge for last month’s heavy loss in Germany and snapping their opponents’ unbeaten run this season.

Saul Niguez fired the hosts ahead in the 33rd minute and Antoine Griezmann added another in the 80th in a one-sided match that ended Dortmund’s unbeaten run in all competitions since the start of the season.

The Germans, who had close to 65 percent possession, did not manage a single shot on goal in the entire match and had a total of just two efforts off target.

“We really wanted to give them a game after they hammered us in Germany,” World Cup winner Griezmann told reporters.

“We learned from our errors and delivered a much better image of ourselves tonight. We had important players injured but the team has respond.”

The result lifted Atletico to nine points, level with leaders Dortmund, with two games left in the group stage.

Belgium’s Club Bruges are third on four points after beating AS Monaco 4-0 earlier on Tuesday with the top two advancing to the knockout stage.

Dortmund, who face Bayern Munich in the Bundesliga on Saturday, found themselves on the backfoot from the start with Diego Simeone’s team eager to make amends for their 4-0 demolition in Dortmund last month. The injury-hit Spaniards, missing several regulars including captain Diego Godin and Koke, still packed a considerable punch, and Angel Correa tested keeper Roman Buerki early on.

With Dortmund opting to defend in numbers rather than attack, the breakthrough for Atletico came when Saul fired in to complete a swift move that had split open the German defence.

Dortmund, the last German team to win a Champions League game at Atletico in their title-winning 1996-97 season, were in disarray and Saul went close to a second goal in the 41st minute, firing narrowly wide.

Buerki rescued Dortmund twice more before the visitors were saved by the halftime whistle.

The Swiss then denied Correa again on the hour before Dortmund had a rare chance of their own with substitute Raphael Guerreiro’s header.

Atletico captain Griezmann put the result beyond doubt when he broke free, charging into the box and slipping the ball past Buerki to seal victory on his 50th Champions League appearance.

“Atletico did it really well, waiting for us and we just lost the ball far too often and then it becomes really difficult against such a team,” Dortmund coach Lucien Favre said.

“Having so much possession, that is positive, but we have to do more with this. We were too static.”