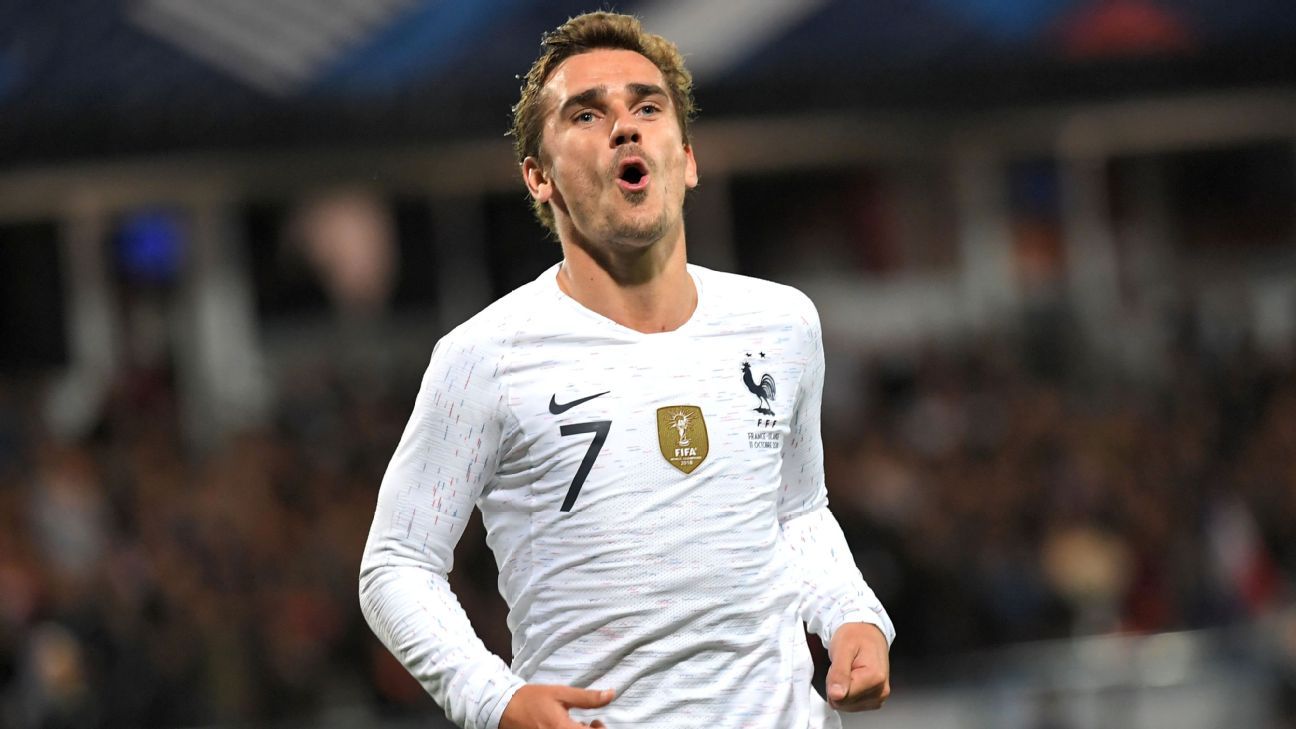 
Atletico Madrid forward Antoine Griezmann told ESPN FC that he dreams of winning the Ballon d’Or and that the opportunity to do so motivates him every day.

Griezmann, 27, won the World Cup with France in July and was named the man of the match in the final, scoring four goals in seven games during the competition.

He is one of the leading candidates to win the top prize in world football, along with Juventus’ Cristiano Ronaldo, Barcelona’s Lionel Messi and Real Madrid’s Luka Modric.

“I actually do [dream of winning it],” Griezmann told ESPN FC. “I’m not afraid of saying it. I dream of the Ballon d’Or, of the Champions League, of winning the World Cup. I dream of a lot of things. I dream of having three children. Those dreams motivate you when you wake up each morning and you have goals to achieve.”

Griezmann, who came third in the Ballon d’Or balloting in 2016, has spoken about how much he wants to win the prize and believes he has a chance to finally do so when it is given out in Paris on Dec. 3.

“On a personal level, that’s the highest you can get,” Griezmann said. “It’s the most historic award, the most prestigious one. However, I also am a player who thinks collectively over individually, but it would be nice [to win it] for myself, because of everything I’ve gone through, especially after having to separate myself from my family at 13 years old.

“Since I was 13 until 18 years of age, when I signed my first professional contract, those were tough moments. Only because of that it would be incredible for my parents, my siblings and for myself.”

Modric, who won the Golden Ball at the World Cup, was honoured with FIFA’s The Best award in September, beating Ronaldo and Liverpool’s Mohamed Salah in the voting.

Griezmann found it odd that he was not named among the finalists, but said he was more aggravated that none of his France teammates were recognised.

“It wasn’t only about me,” Griezmann said. “It was about other French players (being snubbed) as well. I haven’t been able to understand it, but I haven’t tried to, either. It was surprising to see that no world champions were considered.”

Shortly before the World Cup began, Griezmann made the choice to sign a new contract with Atletico and reject an offer from Barcelona — a decision he unveiled in a short documentary that he said was meant to show how much he agonised over his options.

One reason he chose to stay with Atletico, who he joined from Real Sociedad in July 2014, was the support demonstrated to him by coach Diego Simeone and captain and defender Diego Godin after he was whistled in the final La Liga game last season, a 2-2 home draw against Eibar.

“[Simeone] and Godin came to me after the match at the Wanda Metropolitano in which I was booed,” he said. “It was a message from Godin: ‘I will go to your place so we can have a chat.’ I didn’t know that [Simeone] was with him, and I see [Simeone] stepping out of the car.

“I was amazed. ‘What are you doing here? What do you want?’ ‘Nothing,’ he said. ‘We have been talking and we wanted to see how you have been.’ He told me that I didn’t have to make a decision straight away but that I had to take things calmly. He advised me to talk it out with my relatives and close people and then [he told me] about all what I represented for the club and for himself.”

Griezmann, who signed the contract through June 2022, now hopes he can continue to live up to the example he set with France by winning with Atletico.

“It felt good,” he said when asked about returning to the club in August. “There was a huge responsibility — even more so than after the World Cup, I’d say, since everyone’s going to keep an eye on you. They’re going to watch what you do at training sessions or off the pitch. You have to always portray a good image and also set an example.”

Tuchel to maintain his edge on Guardiola?
Barcelona boss Ronald Koeman gets two-match ban, to miss Atletico Madrid clash
How the hit show strives to get the soccer right
Real Madrid’s Courtois critical of ref’s no-call in draw vs. Villarreal
FIFA’s biennial World Cup proposal may be flawed, but it would address inequality among soccer nations