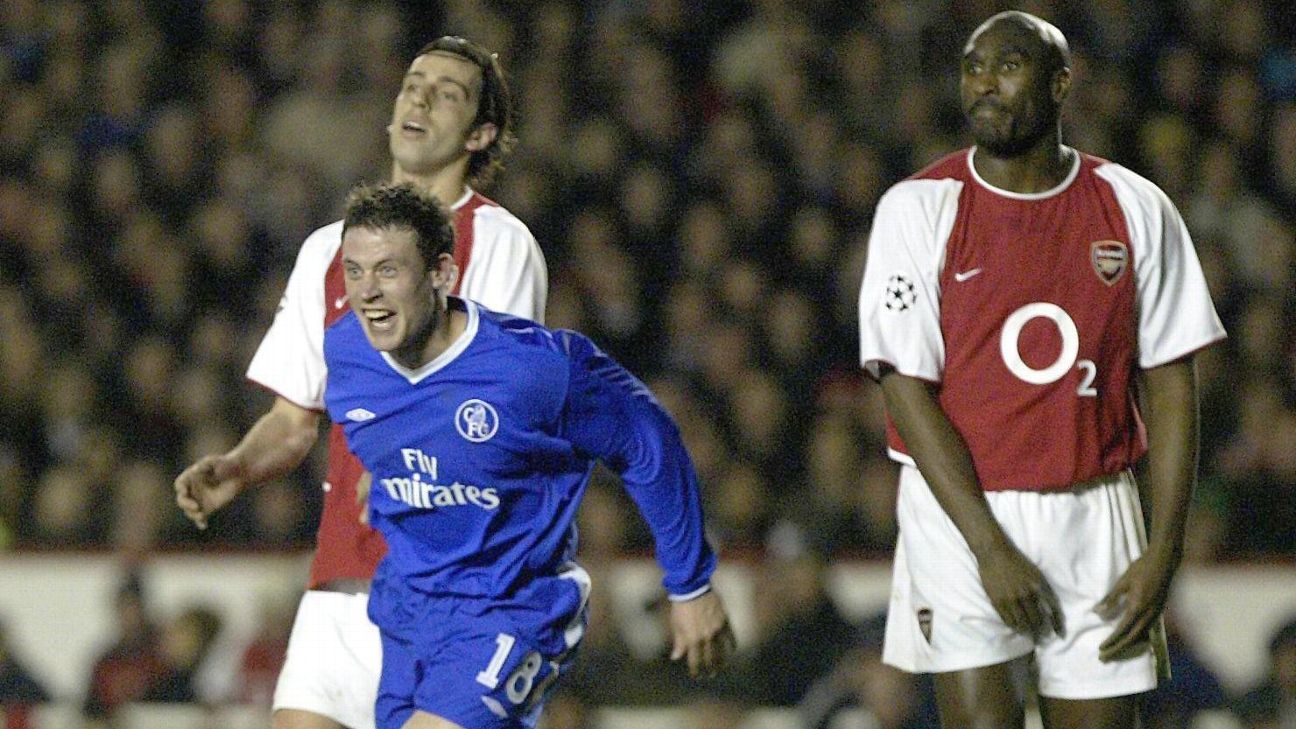 
On Wednesday night at the Wanda Metropolitano Stadium, Chelsea produced the kind of away performance that Premier League clubs have proven almost entirely incapable of on the Champions League stage in recent years, dominating genuinely elite opponents in Atletico Madrid on their own pitch.

But where does it rank among Chelsea’s best Champions League performances on the road?

For much of this balmy spring evening at the Mestalla it appeared as though Fernando Morientes would be the man to crush Chelsea’s dreams again.

Three years after tearing the Blues apart with Monaco, the Spaniard connected with Joaquin’s cross on 32 minutes to give Valencia a 2-1 aggregate lead in a tight and tense Champions League quarterfinal second leg.

Chelsea’s pressure was relentless. Andriy Shevchenko levelled the tie from close range five minutes after the interval but Santiago Canizares was in spectacular form in the Valencia goal as they searched for a winner — until a low shot from Michael Essien, surging forward from right-back, beat him in the final minute.

One of the most remarkable underdog triumphs of recent years, and probably the most surreal match in Champions League history.

Chelsea came to Camp Nou to defend the 1-0 lead given to them by Didier Drogba’s first leg strike, but Sergio Busquets equalised for Barcelona on 35 minutes and Andres Iniesta quickly capitalised on John Terry’s brainless sending off to add a second.

From that moment things got weird. Ramires immediately put the 10 men back in front with a sensational lob and Barcelona laid siege to Chelsea’s penalty area. Lionel Messi crashed a spot kick off the crossbar early in the second half, but it seemed only a matter of time.

Only it wasn’t. As time ticked down with no breakthrough, Pep Guardiola’s men grew anxious and desperate. An aimless clearance from Ashley Cole gave Fernando Torres the freedom of Camp Nou to race away, round Victor Valdes and confirm Chelsea’s place in the Champions League final.

Rafa Benitez had actually lost his status as Chelsea’s chief Champions League tormenter with a two-legged semifinal defeat in the previous season, but Anfield remained an utterly joyless visiting ground on the European stage for the Blues until this emphatic quarterfinal first leg mauling.

Torres primed Chelsea for more misery when he fired Liverpool ahead after only six minutes, but Guus Hiddink’s men did not wilt and instead exploited the home side’s frailty at defending set pieces to take control of the tie.

Branislav Ivanovic attacked two inviting corners to head powerfully beyond Pepe Reina either side of half-time, and Drogba underlined Chelsea’s dominance when he clinically converted Florent Malouda’s low cross after a flowing move.

Chelsea just about completed the job with a breathless 4-4 draw at Stamford Bridge, only for Barcelona to break their hearts in the semifinals.

The only group stage match on this list, though it had all the tension and intensity of a knockout affair.

Atletico under Diego Simeone have established a reputation as the best defensive team in the world, so the reasonable conclusion was that Chelsea were in serious trouble once Antoine Griezmann put them ahead from the penalty spot in the 40th minute after David Luiz had been penalised for grabbing Lucas Hernandez.

Chelsea had edged Atletico up to that point, pinning the home side back for long spells with Eden Hazard drifting dangerously around Alvaro Morata. The pair combined to devatastating effect on 59 minutes, the Spain international coolly glancing a pinpoint cross into the far corner to bring Chelsea level.

Cesc Fabregas missed a gilt-edged chance to beat Jan Oblak from close range shortly afterwards, and Antonio Conte appeared to be settling for a creditable draw when Michy Batshuayi and Willian replaced Morata and Hazard eight minutes from the end.

But there was one final twist, as Chelsea pounced on some uncharacteristically unfocused Atletico defending with a surgically precise passing move that ended with Batshuayi slotting the ball past Oblak in the 94th minute.

Arsene Wenger’s team that would go on to become the “Invincibles” were at the peak of their powers when they welcomed Chelsea — a team they had not lost to in 17 previous meetings in all competitions — for the second leg of a Champions League quarterfinal.

Arsenal already had the advantage over Claudio Ranieri’s men after netting an away goal in a 1-1 draw at Stamford Bridge, and extended it when Jose Antonio Reyes fired through the legs of Marco Ambrosio on the stroke of half time.

Chelsea’s response was stunning. Lampard lashed in when Jens Lehmann spilled Claude Makelele’s fierce long-range strike into his path, and Wayne Bridge initiated a slick one-two with Eidur Gudjohnsen before slamming in the winner.

Ranieri described it as “the most electric thirty seconds of my entire life in football,” though it’s a fair bet that Leicester City surpassed it on their miraculous run to the Premier League title.