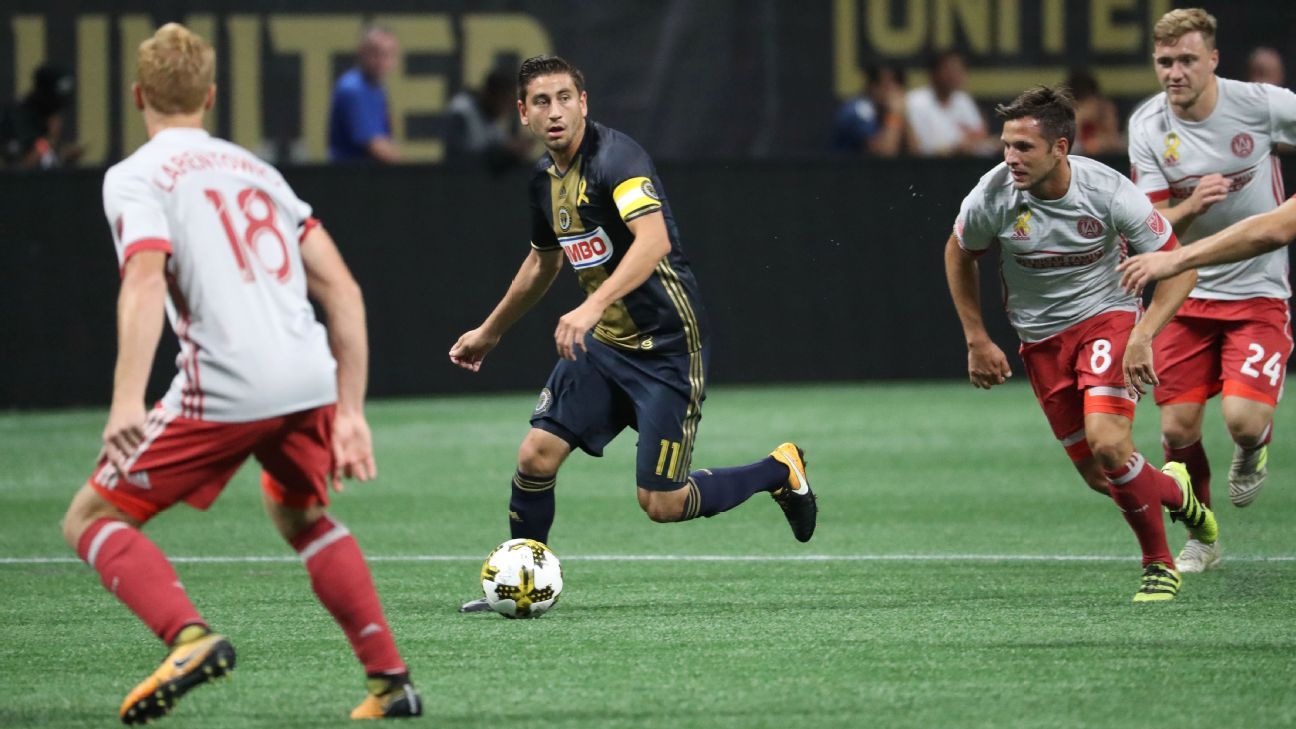 
Atlanta United clinched a Major League Soccer playoff spot on Wednesday night, beating the Philadelphia Union 3-0 to become the first expansion team to make the postseason in its first year since the Seattle Sounders in 2009.

Leandro Gonzalez Pirez set up the hosts’ opener with an incisive through ball to Julian Gressel, who took two touches and then deftly scored at the far post with the outside of his right foot.

Atlanta would double its lead before the break. Gressel set up Josef Martinez with a perfect pass and the Venezuela international, who beat his defender and fired a left-footed shot past Andre Blake to make it 2-0.

Following Atlanta’s second, Martinez, who now has 18 goals on the season, ran to the sidelines and grabbed a Miguel Almiron jersey and held it aloft and then kissed it to honour his injured teammate. Almiron is set to miss at least three weeks with a hamstring injury but will be ready for the playoffs.

Tata Martino’s team had numerous chances to extend its lead in the second half, with a Hector Villalba goal in the 55th minute ruled out by the video assistant referee because Martinez was offside in the buildup.

Villalba was free in the Philadelphia penalty area again, but his low line drive was scooped up by Blake.

C.J. Sapong had a golden chance to get Philadelphia on the board, but his headed shot from a Fabinho cross went right to Atlanta’s Brad Guzan.

And with time running out, substitute Jacob Peterson sealed matters for Atlanta, picking up a long through ball and beating Blake before slotting home into an empty net.

The win and berth in the playoffs was a fitting birthday present for Atlanta team owner Arthur Blank, who turned 75 on Wednesday.

Nemanja Nikolic scored twice in the second half to break Chicago’s season goal record with 20 and the Fire beat the San Jose Earthquakes 4-1.

Chicago clinched a playoff spot with the victory and Montreal’s loss to New York City, while San Jose lost for the first time at home in eight matches.

Nikolic made it 3-0 in the third minute of the second half to break a tie with Ante Razov for Chicago’s goal record and then added another in the 65th by heading in a ball that deflected off the crossbar.

Nikolic is tied atop the Golden Boot race with Portland’s Diego Valeri.

Eighteen-year-old Djordje Mihailovic opened the scoring in the 14th minute with his first MLS goal. In the 40th, Michael de Leeuw volleyed a cross in front of the goal and Luis Solignac headed it home for his seventh goal of the season.

Chris Wondolowski headed in San Jose’s lone goal in the 87th minute, tying him for third in MLS history with Jaime Moreno at 133 in a game that saw Chicago’s Dax McCarty make his 300th MLS regular-season appearance.

Kaka had two goals, Yoshimar Yotun and Dominic Dwyer both had a goal and two assists and struggling Orlando City beat the short-handed New England Revolution 6-1.

Xavier Kouassi was sent off for the Revolution with a red card in the 11th minute after he fouled Seb Hines. Kouassi won the ball, but his follow through went into Hines’ legs and the referee went to the video assistant to deem the foul serious enough for a sending off.

Yotun then assisted on goals for Antonio Nocerino in the 22nd minute and Hines 10 minutes later. Kaka scored in the 43rd and 77th off assists from Dwyer.

Dwyer then scored in the 84th minute, and Yotun in the 90th.

Orlando had just one win in its previous 11 matches and has only won twice in its last 10 home games.

Lee Nguyen scored his 11th goal on a brilliant free kick in first-half stopped time for New England, which has allowed 28 goals in losing its last eight road games. The Revolution are in eighth place, five points below the cutoff line for the playoffs.

United was eliminated from playoff contention with the result, while New York had its winless streak extended to seven games.

New York took a 3-2 lead in the 78th after scoring twice in a four-minute span. Tyler Adams sent a loose ball through the legs of two players into the net and Gonzalo Veron scored on a penalty kick.

In the 91st, United’s Bruno Miranda had a throw-in headed back to him and his cross was deflected into the net by Escobar at the near post.

The game was tied at one at half-time. Adams scored his first MLS goal in the 19th and United’s Zoltan Stieber scored in stoppage time on a deflected free kick.

D.C. United took its first lead in the 70th on Patrick Mullins’ calm finish from the penalty spot.

Jack Harrison scored in the 10th minute and New York City FC held on to beat the Montreal Impact 1-0.

The 20-year-old Harrison fired a bouncing ball past Evan Bush into the top corner from a tricky angle for his 10th goal of the season.

The Impact are 1-6-0 in their last seven games. They have lost four straight home games for the first time in franchise history and trail the New York Red Bulls by four points for sixth place and a spot in the playoffs.

Maynor Figueroa and Roland Lamah scored in the first 10 minutes and FC Dallas snapped a 10-game winless stretch with a 2-0 victory over the Colorado Rapids.

Dallas, the Supporters’ Shield winner last year, won for the first time since July 22. It was the third longest winless run in club history. Colorado was eliminated from playoff contention.

In the sixth minute, Mauro Diaz played a quick free kick and Hernan Grana’s cross went untouched across the middle for an unmarked Figueroa at the back post. In the ninth, Grana ran past the defense to the end line for a chipped ball and found a trailing Lamah for a redirection at the near post.

Dallas goalkeeper Jesse Gonzalez had his eighth shutout of the season. Colorado’s Tim Howard entered with two straight clean sheets in the series, but the Rapids have conceded 13 goals in their last six away games.

Alberth Elis scored two late goals as the slumping Houston Dynamo rallied for a 3-3 draw with the Los Angeles Galaxy, who will miss the playoffs for the first time since 2008.

The Dynamo, who are one point below the playoff line after going 0-3-3 since topping the Western Conference standings on Aug. 12, trailed 3-1 entering the last 10 minutes of regulation.

Hugo Arellano pulled down Elis in the box, leading to a successful penalty kick in the 84th minute. Four minutes later on a third straight corner kick, delivered by Vicente Sanchez, Elis got his head on the ball for his ninth goal.

The Galaxy, who were eliminated from playoff contention when Dallas won, had lost three straight — two by 4-0 counts — but got on the board quickly. Romain Alessandrini sent a centering ball from the left corner that Adolfo Machado mis-played on an attempted clearance and the deflection went off teammate DaMarcus Beasley’s chest in the third minute.

Alessandrini picked up his 11th goal in the 12th minute after Ashley Cole stole the ball at midfield.

Tomas Martinez fought off two defenders in the middle of the box to get one back with his first Dynamo goal in the 26th minute. But two minutes into the second half, Bradford Jamieson restored the two-goal lead with his second goal.

Nicolas Lodeiro scored a goal and set up two more in the Seattle Sounders’ 3-0 win against the Vancouver Whitecaps.

Seattle opened the scoring in the 17th minute after Lodeiro connected with Victor Rodriguez, who fired a left-footed shot past David Ousted to give the hosts an early lead.

And Brian Schmetzer’s team doubled the advantage just past the hour mark, with an unmarked Lodeiro sweeping the ball into the net at the back post after a lovely team move by the Sounders.

Clint Dempsey added Seattle’s third to put any hopes of a Vancouver rally on ice, when the Sounders’ captain easily put away another excellent pass from Lodeiro to make it 3-0.

Tony Tchani was sent off in second-half stoppage time for a hard tackle on Seattle’s Cristian Roldan after the referee consulted VAR and showed the Whitecaps midfielder a straight red card.

The loss for Vancouver temporarily delays a confirmed spot in the postseason. The Whitecaps are still in first in the West and look like a pretty sure bet to reach the playoffs, while the three points help Seattle’s cause as they try to hold on to a spot in the top six.