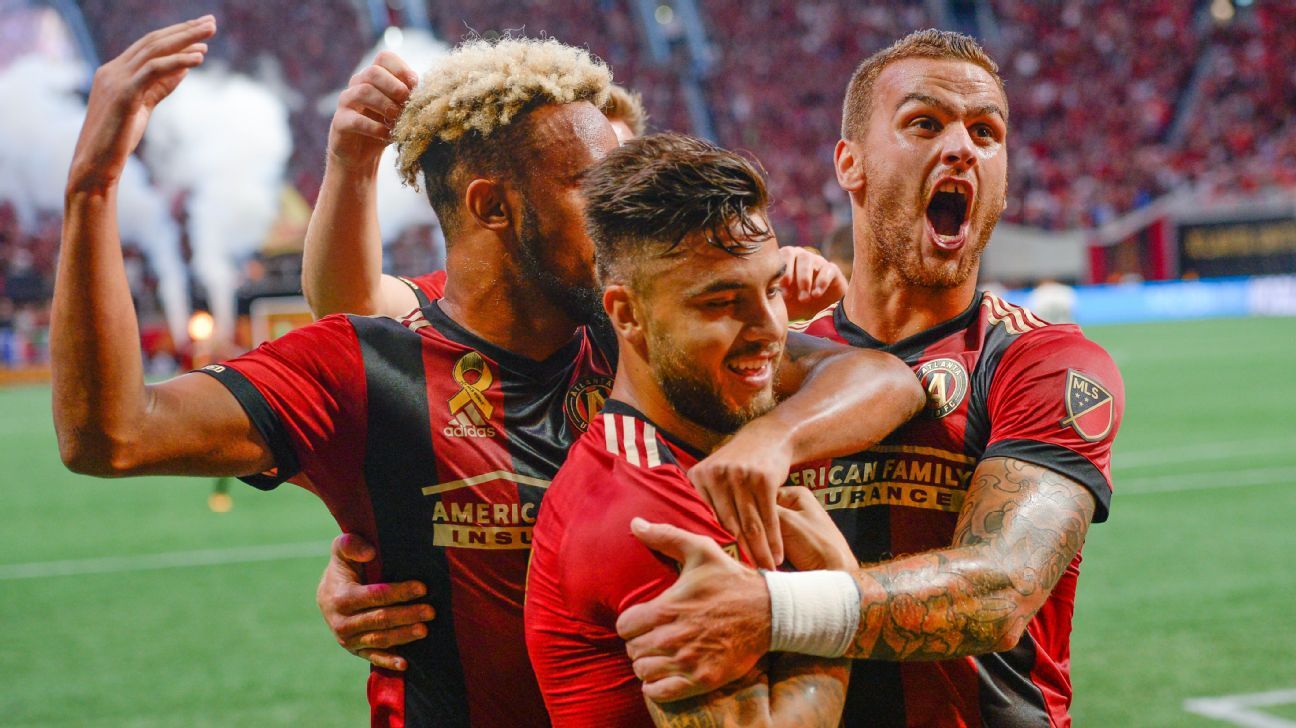 
Atlanta United and Sporting Kansas City make pushes into the top three as the MLS Power Rankings return for week 29.

1. Toronto FC (no change): Teams that lose twice in a week usually fall at least one spot, but Toronto FC had distanced themselves so much that the 5-3 and 3-1 losses to Montreal and New England do not affect their standing.

2. Atlanta United (+2): Atlanta United continue to dominate at home. First a 4-0 midweek win over the LA Galaxy and then topping Montreal 2-0 on Sunday. Arguably the team best equipped to take down TFC.

4. New York City FC (-1): NYCFC are stumbling of late and David Villa looked a bit off in Saturday’s 1-1 draw in Houston. Might be best for coach Patrick Vieira to rest his key men for the playoffs.

5. Seattle Sounders (-2): The Sounders’ 13-match unbeaten streak is over after Saturday’s 2-0 loss at Real Salt Lake. Another poor outing from the attack, which is a growing concern for coach Brian Schmetzer.

6. Vancouver Whitecaps (no change): A good 2-1 home win over Colorado on Saturday, but the real test begins with a three-game road trip to Seattle, Sporting KC and the New York Red Bulls.

7. Portland Timbers (+2): If Darren Mattocks torments opponents in the playoffs the way he did in Sunday’s 3-0 win over Orlando, there’s no reason the Timbers can’t reach the MLS Cup.

9. Real Salt Lake (+2): If it feels like Jefferson Savarino is involved in every RSL goal, it’s because he almost is. In the 2-0 win over Seattle, he finished off a one-two combo beautifully for RSL’s first and then helped set up the second.

11. Chicago Fire (-3): Saturday’s tilt in Philadelphia felt like a trap game for the Fire and it played out as such, losing listlessly 3-1. They need a strong response on Wednesday in San Jose.

12. Houston Dynamo (+1): Saturday’s 1-1 draw at NYCFC was one of Houston’s stronger road displays this season. A home-friendly schedule awaits the Texans in the home stretch.

13. Philadelphia Union (+1): Saturday’s 3-1 win against Chicago was one of the Union’s best matches of the season.

14. New England Revolution (+2): Maybe if New England’s MLS schedule was 34 home matches against TFC, they’d go undefeated for the season. For now, two wins in two home games — 3-1 on Saturday — against the Canadians in 2017 will do.

15. Montreal Impact (no change): What an odd week for the Impact. A stunning 5-3 midweek win at TFC, only to drop a 2-0 contest in Atlanta on Sunday. Still in the playoff chase though.

16. San Jose Earthquakes (-4): Dropping a 4-0 clunker at DC United is not exactly the way to show you’re serious about making the playoffs.

17. Minnesota United (+2): Minnesota were more than happy to take advantage of FC Dallas’ malaise in Saturday’s 4-1 win. Two wins in a row for the Loons.

18. FC Dallas (-1): Everyone is running out of words to describe this team’s horrific fall. Their defending on Saturday was abysmal. Oscar Pareja on the hot seat?

20. Orlando City SC (-2): Did it ever look like Orlando had a chance in Portland on Sunday night? That 3-0 loss could have been much worse.

21. Colorado Rapids (no change): Decent fight from the Rapids in the 2-1 loss in Vancouver, but just not enough quality, especially up front.