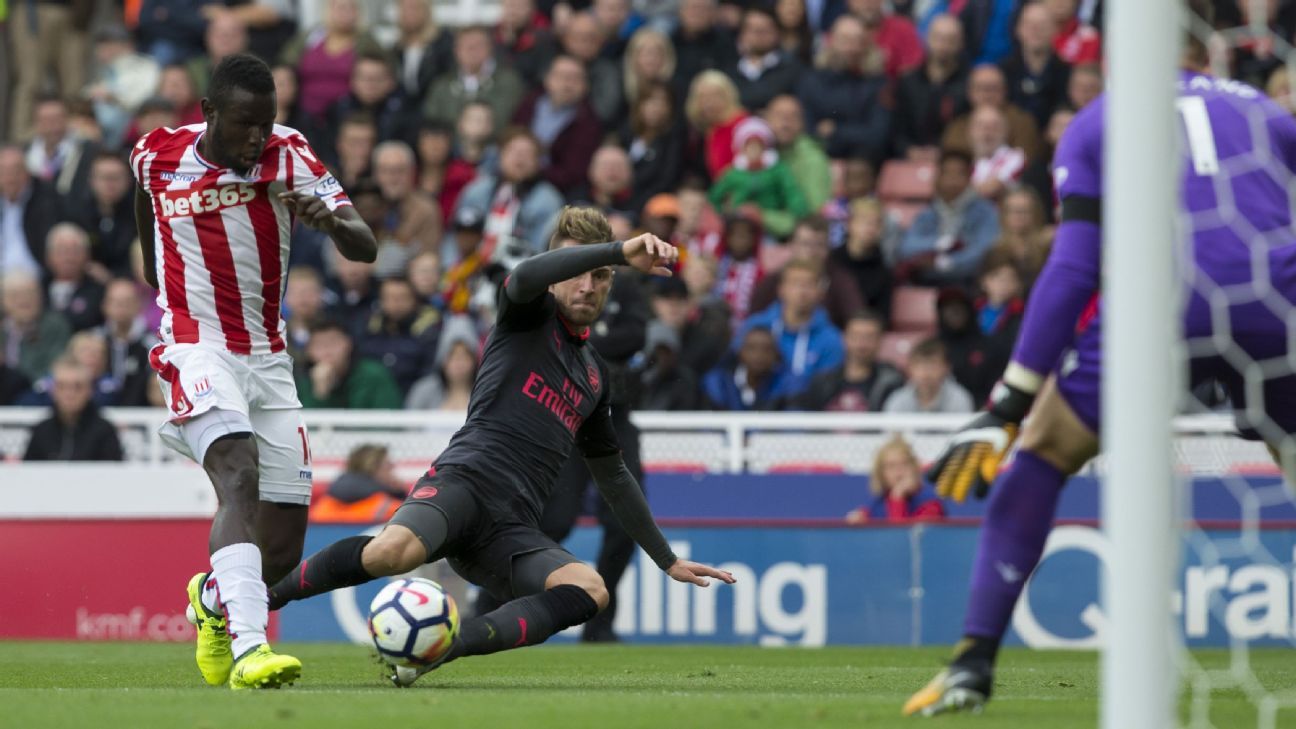 
Arsenal manager Arsene Wenger slammed his makeshift defence for being “too sluggish” and complained his side had been denied a goal and a penalty by incorrect decisions in the Gunners’ 1-0 loss to Stoke on Saturday.

Stoke debutant Jese Rodriguez slotted the ball past Petr Cech just two minutes after the half-time break after a quick counter-attack, as Nacho Monreal failed to close him down before he could get off a shot.

Monreal was one of two left-backs deployed in Wenger’s back three for the second game in a row, as the Arsenal boss left Per Mertesacker on the bench and young centre-backs Rob Holding and Calum Chambers completely out of the squad.

And the Frenchman said he was not impressed by their performance.

“We knew it was important in this type of game not to make a defensive mistake, and after halftime straight away we come out and we are too sluggish on defending and pay for it,” Wenger told BT Sport.

“First of all we lose the ball in the middle of the park and after that I believe we gave him too much freedom at the back through the middle and basically gave them a goal.

“You need always to improve the connections between the players, but I was not convinced by our central defence today.”

Wenger was also left lamenting a 72nd-minute offside decision against Alexandre Lacazette which ruled out an Arsenal equaliser.

It was a decision that left pundits split, although replays showing one of the French striker’s feet was marginally offside when Olivier Giroud played a backheel into the area.

“I believe it is the kind of night where you are angry,” Wenger said in his news conference. “That is because not only did we not score with the number of chances we had, we made stupid mistakes centrally for the goal, first by losing the ball and after by not defending properly.

“And on top of that as well I think we were unlucky with some decisions from the referee because we scored a regular goal.”

Asked if he felt that effort should have stood, Wenger said: “One hundred percent. I just watched it and it is not offside at all. Even his foot was not offside.”

Wenger also protested that referee Andre Marriner was wrong not to have awarded a spot-kick in the first half when Hector Bellerin went down in the Stoke box under the attentions of Mame Diouf.

“We know we don’t get penalties,” Wenger added. “Look at the numbers and you will see. We had last year the highest [number of] penalties against us at home by a mile and the lowest number for us. So I give you just the numbers. I don’t say anything else.”

The loss means Arsenal have three points from their opening two games, with another tough away game coming up next at Liverpool. And Wenger admitted that it could be a costly slip.

“I believe that some teams will get something here who want to play at the top,” he told BT. “That’s why you can consider it three points dropped.”