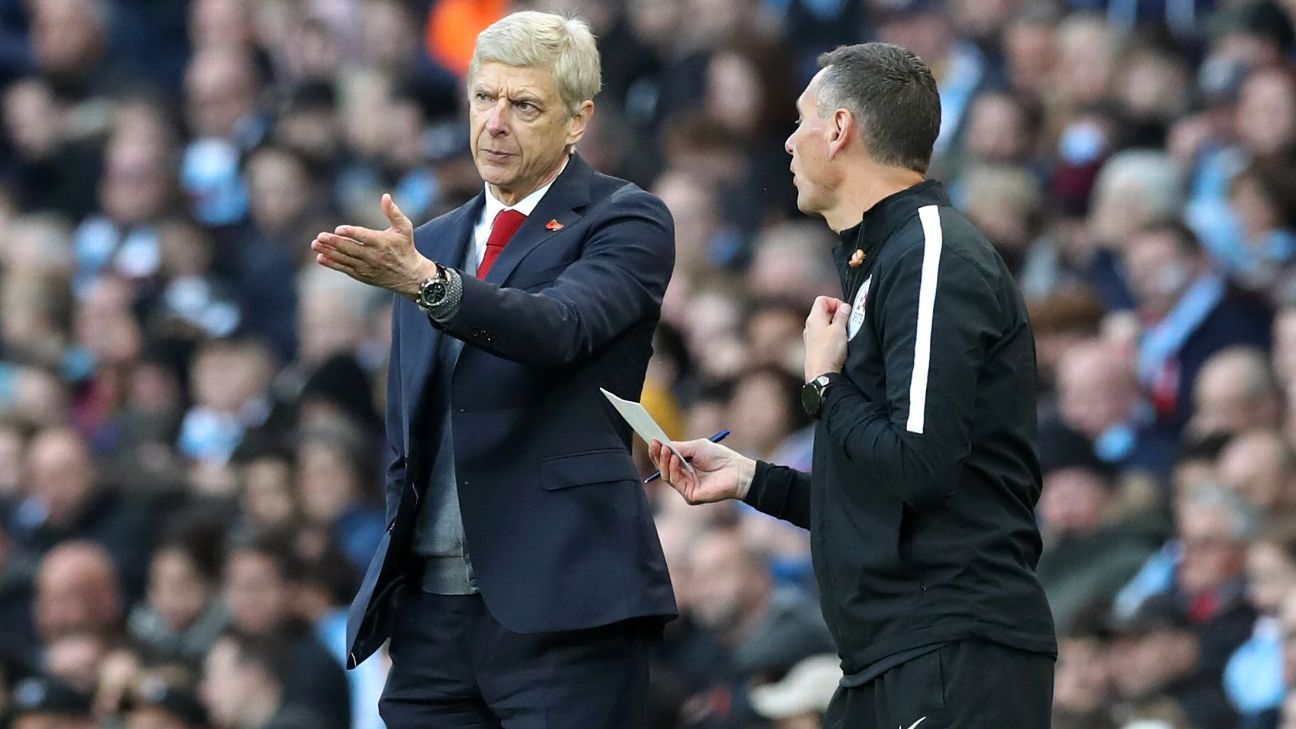 
MANCHESTER, England — It took the final exchange of a short, prickly post-match news conference from Arsene Wenger to tease out the issue that, quite apart from any immediate concerns about penalties and offsides, resonates for the long term.

The Arsenal manager was questioned about the capabilities of a Manchester City side that, leaving aside a period when they were shaky at 2-1 up, treated their guests at the Etihad Stadium as they have most of their opponents this season. Wenger’s answer featured the kind of admission that would have seemed inconceivable in the days when his team were serious Premier League title contenders.

A caveat followed: Wenger drily pointed out that City will be “unstoppable” if they receive more decisions like that one that, with the game looking competitive at last, wrongly ruled David Silva onside in the move that brought City’s third goal. That had been the focus of his comments after full-time and, to avoid any doubt, he had a point.

Arsenal had fought their way back into contention and, while the margin for the call was very tight, the timing of the error that gave City daylight was gut-wrenching. There had also been a “seen them not given” aspect to the penalty Sergio Aguero dispatched shortly after half-time; in a game where good fortune seemed a prerequisite for making any headway, Arsenal got very little.

But that is a diversion and, in the bigger picture, Wenger surely knows it. When, even during the fallow years of transition in the post-Highbury era, has the Arsenal manager effectively conceded defeat in the title race as early as the first weekend of November, as he appeared to do here.

His tendency has been to talk up the potential of his own group — not always wisely — but even Wenger at his most punchy would find it hard to dispute the obvious: City are in another league, certainly to Arsenal and quite possibly to everyone else who once held hope of competing with them.

The sadness for Wenger is that we are here at all. There have been times in his career when more pragmatism might have gone a long way but, when he and Arsenal were in their pomp, it would have been impossible to imagine them beginning a match against a rival with what amounted to a back five.

True, Arsenal have played three centre-backs all season and Wenger is now sufficiently wed to the system that he fielded Francis Coquelin — a midfielder — there for his first league start of the campaign in the absence of other options.

But City’s pressure ensured Arsenal’s wing-backs were unable to get forward consistently, particularly during the first half, and the end product was further evidence that Wenger no longer considers his side able to approach the best teams on their own terms. There were flickers of attacking spark after Alexandre Lacazette’s introduction, which brought a well-taken goal. But the gruel was thin and the cracks cannot be papered over.

Watching City whizz the ball around — a feint here, a quick stepover and interplay there — brought home the most inconvenient of truths: Pep Guardiola’s side are, almost to the finest detail, the team that Wenger would have wanted his to be.

It was a thought that occurred as early as the second minute when Arsenal, conceding possession from their own corner, were torn apart on the counter and fortunate to be let off by a miss from Sergio Aguero. Raheem Sterling to Kevin De Bruyne; De Bruyne straight on to Aguero: the confluence of speed and precision brought Wenger’s own Invincibles to mind and it turned out to be a mere appetiser.

Under Wenger, Arsenal’s selling point has rightly been their brand of football. The problem is that, over the past three or four seasons, intuitive combinations have deserted them and it has come to the point where, next to City, they look clunky and one-paced. They had their occasional moments here but, with Alexis Sanchez ploughing a lone furrow up front and little in the way of coherence around him, they looked like just another Premier League team.

Guardiola was particularly happy with the way his side, which contained nine of the starters that won 4-2 at Napoli in midweek, stood up physically against a team that had — bar Coquelin — sat out of Europa League action on Thursday.

This was a step forward, City’s manager felt; A third win of this campaign against a team from what he called “the five or six contenders,” to follow the victories over Liverpool and Chelsea. It feels like a significant detail of City’s progress given that, last season, they only managed the feat twice, prevailing at Old Trafford and in Arsenal’s previous visit to the Etihad, some 11 months ago.

Indeed, the second of those games — a 2-1 defeat — came up in Wenger’s post-match summary as he discussed Michael Oliver and his officiating team.

“We are used to it when we come here,” Wenger said of decisions against his team. “Last year we had two offside goals against us. I feel the referees don’t work enough, because their level drops every season at the moment.”

He might be right, he might be wrong. The upshot, though, is that the referees can work all they like but, on the stark evidence presented this year and last, Arsenal’s level is also dropping. Wenger will know, deep down, that the way back is becoming ever more distant.